I tend to be a little leery of shonen comedies, but I found Komi Can’t Communicate both amusing and endearing. I think in general I tend to have better luck with Shonen Sunday series like this one as opposed to Shonen Jump titles. Komi Can’t Communicate is told though the point of view of Tadano, a timid freshman who just wants to get through high school without standing out too much after some disastrous attempts to distinguish himself in junior high. However, as is fairly typical for any manga protagonist wanting a normal high school life, this doesn’t end up happening. 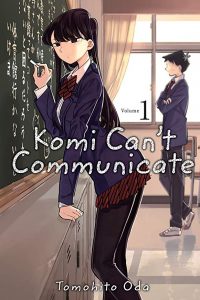 He meets his classmate Komi, who is held up as the class princess due to her beauty and aloof nature. But as he encounters her by the lockers and in the classroom, Tadano begins to realize that she’s not silent because she’s stuck up, she actually has a psychological condition that prevents her from talking to people. They find a fairly adorable workaround by having a conversation through writing on the chalkboard, and Tadano vows to help Komi achieve the goal of having 100 friends. This unfortunately means that Tadano is going to have to ramp up his own social skills if he’s going to serve as a friendship wingman to a girl who is having such difficulty with verbal communication.

I enjoyed the way Oda’s art showed Komi’s body language as she struggles to get through school, with her poses that could be mistaken for snobbishness or extreme social terror at the same time. She also sometimes reverts into wide-eyed chibi mode when something happens that is particularly alarming. In their quest for friendship Tadano and Komi meet Najimi, a classmate who appears to be gender fluid, but who is a totally social butterfly and the most popular person in school. While enduring the awkwardness of high school creates plenty of comedic situations, I thought that the first volume of Komi Can’t Communicate actually had a great deal of heart, which made it much more fun for me to read than a comedy that’s more mean-spirited. It’ll be interesting to see what happens with Tadano and Komi at their extremely quirky high school.