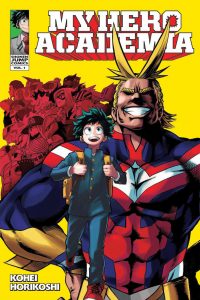 Reviewing nineteen volumes of a manga at once is a pretty daunting task, but here goes!

In a world where 80% of the population possesses superpowers known as “Quirks,” some people turned to villainy while others, officially trained and licensed, embarked upon careers of heroism to thwart them. Izuku Midoriya grew up idolizing heroes, particularly All Might, the Symbol of Peace, who always saved people with a smile. Unfortunately for Izuku, he was one of those unfortunate few without a Quirk and was forced to watch as his classmates and friends manifested abilities while he did not.

When Izuku is fourteen, he meets and impresses All Might when, despite being powerless, he rushes in to help his childhood friend Katsuki Bakugo when he is attacked by a sludge villain. As it turns out, All Might, who possesses a Quirk called One for All that endows him with super strength, was grievously injured several years previously in a battle with his nemesis, All for One. One for All is unique in that it can be passed on to a successor, and All Might has decided that Izuku is worthy of inheriting his power. All along, it’s been Izuku’s dream to attend U.A. High School and, after ten months of intensive training (and after ingesting one of All Might’s hairs), he succeeds in passing the entrance exam for U.A.’s Hero Course, much to Bakugo’s annoyance. (Bakugo believes he has been deceived about Izuku having been Quirkless all this time.)

Like many other shounen manga, part of the plot of My Hero Academia involves Izuku and the other students gradually getting stronger. Izuku goes through various stages of control over his power and eventually injures himself seriously to the point where he must switch to fighting primarily with his legs because his arms are so damaged. By volume nineteen, he can sustain 20% power only briefly, and All Might (who now teaches at U.A.) is training him how to, for the first time, add long-range attacks to his arsenal. 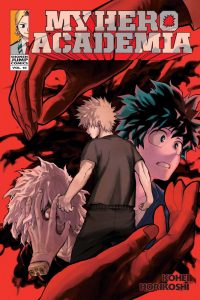 Meanwhile, just as Izuku is the protégé of All Might, All for One had taken a boy under his wing, as well. Tomura Shigaraki is a nihilistic villain with a particular grudge against All Might. He forms the League of Villains and so far has attempted to assassinate All Might at the school, attacked a training camp and kidnapped Bakugo, and ambushed a police caravan in order to steal Quirk-erasing drugs that had been seized from a former ally. While All Might exhausted the remainder of his powers to vanquish All for One, Shigaraki remains an active threat. Because of the power vacuum left by All Might’s retirement, the U.A. first years are able to take their provisional license exams earlier than normal and also go out into the field in work-study capacity.

The TL;DR version is: the plot is very good. Horikoshi-sensei writes with exuberance and mastery. However, the plot is not the reason I love My Hero Academia. I love it for the characters. I was thinking… I have read almost 90 volumes of One Piece by this point. Clearly, I enjoy it a lot and particularly admire the worldbuilding and continuity. However, while I’m fond of a few of the Straw Hats, I wouldn’t say I love any of them. Whereas with My Hero Academia, I love, like, ten of them. Here are some standouts:

• Izuku Midoriya – One of the things I really like about Izuku is that he’s smart. As a Quirkless hero fanboy, he spent a lot of time analyzing how they handled situations, and he’s good at coming up with strategies. Plus, he possesses all the idealistic qualities that a good shounen hero should have. He’s always out to help people, even if they don’t ask for it.

• Katsuki Bakugo – Bakugo has an explosive temper, but gradually reveals he’s a lot more sensitive that he lets on. Because of his volatile performance at the Sports Festival, Shigaraki targeted him, hoping to recruit him for the League of Villains. This ultimately led to All Might’s final confrontation with All for One, and Bakugo feels responsible that the Symbol of Peace (whom he also deeply admires) has been depowered. He’s the only one who knows Izuku’s secret and, after the most moving brawl I’ve ever seen in which he’s able to process some of the feelings he couldn’t express, he’s finally able to talk to Izuku without hostility. The day he actually smiles at Izuku, I will bawl. 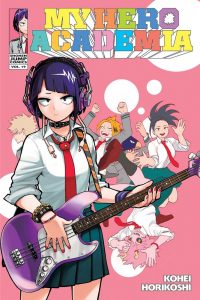 • Shoto Todoroki – He became Izuku’s friend after the Sports Festival, in which Izuku encouraged him to finally embrace the half of his powers that came from his odious dad, #2 hero Endeavor. He’s still got a complex about his dad, but he’s working through it. And, for his part, Endeavor is trying to become a better hero, too, though he’s got a long way to go.

• Ochaco Uraraka – She’s a spunky girl who admires Izuku and has other feelings for him that she’s pushing aside for the moment. When she begins the series, she wants to become a hero for financial reasons, hoping to support her parents who’ve worked so hard. After her work study experience requires her to convey a dying hero to the hospital, she realizes in volume eighteen how much she just wants to save people. The monetary side has become less important.

• Eijiro Kirishima – Kirishima is just a supporting character until around volume fifteen, when he suddenly gets more fleshing out than even Ochaco or Ida (another of Izuku’s close friends) has received. He’s got an inferiority complex because his Quirk is purely defensive and castigates himself that he couldn’t help when Bakugo was taken. He presents himself as someone more confident and has a lot of noble ideals about what a hero should be, but I love that underneath that persona he’s a lot more complicated.

• Yuga Aoyama – In most other series, the kid who starts off being puffed up with pride over his own abilities (a naval laser!) would remain comic relief forever. But Horikoshi gives Aoyama several important heroic moments and, recently, he and Izuku have bonded over the fact that both of their Quirks cause them bodily harm, which doesn’t seem to be a problem for the other students. I would really love to see Aoyama star in his own arc.

• Mirio Togata – I was not prepared for the dizzying speed at which I’d come to love Mirio. First introduced in volume fourteen, he’s the one the principal (and All Might’s former sidekick, Sir Nighteye) originally had in mind as the next recipient of One for All. He’s optimistic and works hard and I love that he bears no grudge against Eri, a six-year-old girl that he lost his Quirk protecting. His return to heroism has been foreseen, so that’s something I’m looking forward to. His best friend Tamaki Amajiki is highly lovable, too.

• All Might – He’s not the greatest teacher, but he’s really trying hard. He serves as a father figure to Izuku and says encouraging things to him that make me verklempt, like “You’ve already exceeded my expectations more times than I can count. In my heart of hearts, I believe there’s something special in you and you alone.” He absolutely does not hesitate to give everything he’s got in that final battle with All for One, and has no regrets about the outcome, save that he failed to notice how much pain Bakugo was in about it. “I’m sorry. You too… are only a boy.” Waah. 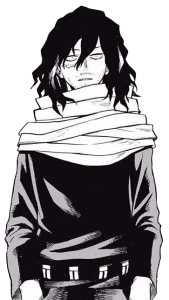 • Shota Aizawa – I saved the best for last. Aizawa is the homeroom teacher for class 1-A and I love him so, so much. He is a great teacher and puts a lot of thought into how best to encourage development in his students. One of my favorite Aizawa moments occurs at a press conference when he expresses absolute faith that Bakugo will not be tempted to join the League of Villains. “More than anyone, he pursues the title of top hero with all he has.” Later, during a home visit with Bakugo’s parents to discuss the new on-campus dormitories, Bakugo’s mom reveals how much she appreciated this proof that her son has been understood by his educators. “Most everything comes easy to him. His whole life, people’ve made a fuss about him… praising him for every little thing he does.” Aizawa sees Bakugo’s potential but also doesn’t let any of his shortcomings slide. I love, too, how he helps take care of Eri and buys her outfits with kitties on them.

Barring one, the other students in class 1-A are great, too, and I hope they get their own arcs as revelatory as Kirishima’s. And then there’s class 1-B, whom we’ve only glimpsed, as well as Hitoshi Shinso, a boy from the General Studies Course who may have the potential to transfer to the Hero Course.

Alas, there’s one thing and one particular character that I don’t love about My Hero Academia.

• Although the female characters are impressively varied in character design and personality and are always included in various heroic endeavors (and their abilities respected by the male characters), they just don’t get as much of the spotlight as the guys do. True, Ashida and Jiro are more to the fore during the School Festival arc, which is very welcome, but I want to see them out in the field kicking some serious ass.

• Minoru Mineta – Unlike the other students who’ve grown over the course of the series, Mineta starts off as a gross little pervert, remains a gross little pervert, and there’s zero indication that he’ll ever be anything other than a gross little pervert. He doesn’t see girls as people, but as objects, evaluated solely for their attractiveness. In fact, his first words to Eri in volume nineteen—who is, I reiterate, six years old—are, “Look me up in ten years.” I want Shigaraki to use his disintegration Quirk on him. Slowly. And then Shinso can have his spot.

Ultimately, I love this series unabashedly. I love it as much as I love Hikaru no Go, and that’s a lot. And as with Hikaru, I love the anime just as much as the manga and recommend both. It took until volume nineteen to make it to October of Izuku’s first year, so at that pace, we’re looking at around 38 volumes per school year times three years… Sounds good to me! I will plug my ears and go “la la la!” if anyone ever mentions a time jump. This is really too good to rush. Or miss.

My Hero Academia is ongoing in Japan, where volume 24 will be out in August. Volume 20 is due out in English in August. New chapters are also available in English on the Shonen Jump website and app.

Review copies for some volumes provided by the publisher.