Last week at Experiments in Manga was relatively quiet, but I did post the Bookshelf Overload for March. As mentioned in that post (and I think sometime prior to that as well), I’m currently in the process of changing jobs, so I’ve been a bit preoccupied to say the least. (If you follow me on Twitter, this largely explains my sporadic appearances there.) This week is my last week in my current position, so I’m understandably pretty busy with meetings and tying up loose ends and such. I still plan on finishing up and posting my review of the first volume of Nagabe’s The Girl from the Other Side sometime this week, but it will probably be towards the end.

As for crowdfunding efforts, Digital Manga will be launching its most recent Juné Kickstarter sometime later today in an effort to publish print editions of some of Psyche Delico’s manga which were previously only released digitally. (This is in addition to recently announced print licenses of Psyche Delico’s Even a Dog Won’t Eat It and Choco Strawberry Vanilla.) Another Kickstarter project to keep an eye on is Retrofit Comic’s Spring 2017 collection which includes Yuichi Yokoyama’s Iceland. (In general Retrofit Comics releases some great books, but this will be the publisher’s first manga to be translated.) Finally, the wonderful people behind Queer Japan are currently raising funds for the film’s post-production as well as some of the non-profit organizations featured in the documentary.

Dawn of the Arcana, Volumes 7-13 by Rei Toma. I enjoyed the first part of Dawn of the Arcana a great deal and so was looking forward to reading the rest of the series. As the manga progresses it becomes less reliant on the standard fantasy tropes that form its base, although it never escapes them entirely. However, even considering this, Dawn of the Arcana is still a satisfying and enjoyable series. The story’s most dramatic plot twist I guessed at long before it was actually revealed, but there were still developments and directions that the story took that managed to surprise me. At times it felt like Dawn of the Arcana was only scratching the surface, as if the manga was only providing a summary version of a much more complicated narrative. The characters and story have depth to them, but not everything is thoroughly and completely explored, much of the more nuanced interpretations being left to the readers to form. I really liked Dawn of the Arcana. It can be heartbreaking–the characters’ struggling with circumstances that have no easy resolutions–but also thrilling as they find ways to take control of their own fates.

Murciélago, Volume 1 by Yoshimurakana. I was forewarned about the violence, gore, and otherwise explicit nature of Murciélago, so I was well aware of what I was getting myself into by picking up the manga. Murciélago is ridiculous, absurd, extreme, over-the-top, and a great deal of fun if someone doesn’t have a problem with the series’ aforementioned blood and brutality. Interestingly, the risqué lesbian sex scenes which both open and close the first volume, while being deliberately lewd, scandalous, and outrageous are also entirely consensual and in a way are bizarrely one of the more wholesome aspects of the manga. The lead of Murciélago is Kuroko Koumori, a dangerous, murderous, and lecherous woman who has been sentenced to death for her crimes. Kuroko is a monster and is portrayed as such. (She’s an awful person, but I really like her as a character.) The only reason that she’s still alive is that the police have indefinitely postponed her execution in order to take advantage of her impressive skills as an assassin. So, yeah, Murciélago definitely isn’t a series for everyone, but I certainly plan on reading more of it.

Triton of the Sea, Omnibus 2 (equivalent to Volumes 3-4) by Osamu Tezuka. It has been a very long time since I read the first half of Triton of the Sea. So long ago in fact that I had forgot that I hadn’t actually finished the series yet. Fortunately, the manga was pretty easy to pick up again. I seem to like Triton of the Sea best when the story centers its focus on family. In the first omnibus, it was Triton’s relationships with his human family that really captured my attention and in the second it was his experiences as a new father that most delighted me. (It probably didn’t hurt that the baby merfolk were super cute.) Triton of the Sea is also a story of revenge. Triton is determined destroy the Poseidon clan for the sake of his people who have been nearly driven to extinction, his desire for retribution blinding him from seeing other courses of action that might allow the two clans to establish a lasting peace. This of course only serves to continue the cycle of violence that puts him and his loved ones in danger. Triton of the Sea isn’t Tezuka’s strongest or most notable work, but I did appreciate the themes that Tezuka was exploring with the series.

Wandering Island, Volume 1 by Kenji Tsuruta. The premise of Wandering Island is fairly simple: Mikura Amelia is a pilot for an air delivery service based in the Izu Islands that she and her grandfather established together. When he unexpectedly passes away, she understandably takes it pretty hard. While in mourning she discovers package among her grandfather’s belongings with an address on it that shouldn’t exist, leading Mikura to become obsessed with a search for a mysterious, disappearing island. Although there are some wonderful scenes of Mikura in flight, there’s not really much action in Wandering Island. Instead, the manga is rather leisurely paced with a contemplative and melancholic feel to it. Wandering Island is also beautifully illustrated, Tsuruta’s artwork being one of the series’ highlights. I love how Tsuruta is able to capture a sense of place and the people who live there. I’m not sure when or if the second volume of Wandering Island will be published in English (the Japanese edition itself isn’t even scheduled to be released until next month), but I would definitely like to see it translated. 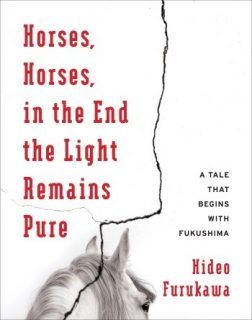 Horses, Horses, in the End the Light Remains Pure: A Tale That Begins with Fukushima by Hideo Furukawa. Fukushima has been on my mind lately which reminded me of the fact that I had yet to read Furukawa’s Horses, Horses, in the End the Light Remains Pure, one of the first major literary responses to the earthquake, tsunami, and nuclear disasters associated with March 11, 2011. The work is rather curious, but it’s also worthwhile and powerful. In part it’s a sequel of sorts to Furukawa’s novel Seikazoku (The Holy Family), which hasn’t actually been released in English. However, familiarity with that earlier work isn’t at all necessary. Horses, Horses, in the End the Light Remains Pure also delves into the history of Fukushima as a whole, both before and after 2011. But perhaps most importantly, it’s an incredibly personal memoir. Though he was away at the time, Furukawa was originally from Fukushima. Soon after the disasters struck, he traveled back to the area in order to witness the aftermath of the events himself. A fair amount of the volume is devoted to Furukawa’s profound experiences while on that trip, combining fiction, history, and biography in a compelling way.