kakuriyo bed and breakfast for spirits

Kakuriyo: Bed and Breakfast for Spirits Volumes 4 and 5 by Waco Ioka, Midori Yuma and Laruha

I feel like now Kakuriyo has settled into a reliable rhythm for the reader, with each volume blending elements of food preparation and consumption and showcasing supernatural entities with some hints at the ongoing mystery surrounding Aoi’s grandfather and his relationship with the spirit world.

One of the reasons why I enjoy this manga is because it blends in very mundane concerns with a supernatural setting. This was particularly on display in volume 4 when Aoi needs to take into consideration vital aspects of business administration in her attempt to launch a cafe in a slightly inconvenient corner of the Tenjin-ya Inn. Aoi treats everyone who has been helping her get the cafe ready for opening to rice balls with individualized flavors that appeal to their unique personalities. When Aoi ventures out with Odanna to the local markets and gets a clue about a mask she remembers an ayakashi wearing who helped her a long time ago. Aoi is still running into resistance from other members of the Tenjin-ya staff, but she finds some ways of winning over new customers by creating special bento boxes for a sequestered writer. I do still sometimes wish the art for Kakuriyo was a little more elaborately detailed or creative, but I’m happy to see some unsettling ayakashi character designs such as a three-eyed woman with a snarky three-eyed baby, or the no-face handmaidens who always show up to give Aoi a makeover. 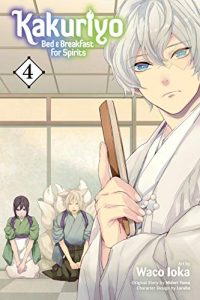 The fifth volume opens with Aoi sharing a quiet moment with Odanna, as she follows him out to his mountain retreat and learns about a new delicacy – fire chicken eggs cooked in a hot spring. Aoi also gets a new clue about the white-masked ayakashi from her past and an impactful endorsement from the badger demon novelist. Business starts to look up a little bit after Aoi also gets a visit from a fortune spirit who loves red bean paste desserts. I found myself really enjoying the way this manga is paced, with Aoi slowly finding out more about the strange world she’s been transported to, and her low key ways of getting to know ayakashi through preparing simple dishes with their unique needs in mind. Five volumes into the series, it is much more satisfying as a food manga, with the food preparation showcased in at least a page or two instead of being skipped over.

This is one of those series that ends up getting stronger with each volume. I thought the first volume was okish, liked the way the second volume showed more character development, and appreciated the balance between backstory and new plot elements in the third volume. One thing I tend to look for in series about ayakashi is some interesting character design or art that captures my attention. While the art for this series is fine, I wasn’t getting that same sense of wonder about the spirit world that other ayakashi-centric manga titles have delivered. In this volume, I did find the portrayal of wall demons blocking Aoi’s path to be delightful, as they looked like pieces of wallboard dressed in formal kimonos. 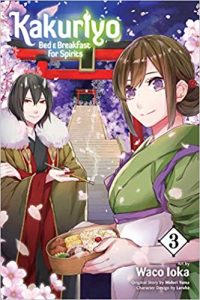 Aoi is slowly finding more of a rhythm to her life in the spirit world with the discovery that her food is unique in bolstering the spiritual energy of the demons that surround her. She becomes more involved in the lives of the spider demon siblings, Suzuran and Akatsuki. They tie in to her own story with her grandfather, as she learns that he took them in and temporarily made them his servants when they were fleeing for their lives. Suzuran wants to go back to the human world to exist near Shiro’s grave, and Akatsuki is absolutely opposed to her dream. Aoi mediates this sibling relationship with nourishing food, and the steps in cooking her dishes are more clearly portrayed in this volume. It didn’t quite deliver the level of obsessive detail that I like to see in a food manga, but I appreciated food preparation getting more attention, since it is so central to Aoi’s identity.

One thing I really enjoy about this series now is how each volume tells a satisfying story while inspiring more questions for the reader to ponder. Shiro’s actions and motivations seem more mysterious the more Aoi learns about him. I’m also curious to find out more about Ginji after seeing him report back to the Odanna. I’m enjoying the measured pace at which this story is developing.

I found the first volume of this series pleasant enough, but I wasn’t sure how well it would measure up to the heights of other Shojo Beat series like Kamisama Kiss or Demon Prince of Momochi House. Reading the second volume of Kakuriyo reminded me that it is always good to give a manga series a couple volumes to settle into itself, and I found some of the mysteries being set up in the second volume broadened the world building a bit more to capture my interest. 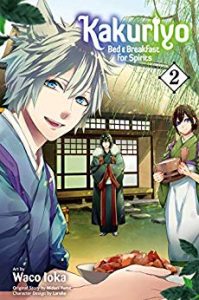 The volume opens with Aoi stumbling across a Tengu in front of the abandoned cafe that she’s temporarily inhabiting in the spirit world. The elderly man reminds her of her grandfather, and she proceeds to feed him her extra food. As she introduces herself to Lord Matsuba, he realizes that she’s Shiro’s granddaughter and starts laughing with his recollections. He shares some of his memories and goes on his way. The next morning Aoi finds out that she’s stumbled into spirit world diplomatic relations, as Lord Matsuba is extremely powerful. He finds it outrageous that she’s sleeping in a storeroom and cooking, and offers to bring her to his mountain where she can be a bride for one of his sons. He also gifts her with a special fan. Aoi is determined to find her own path and declines his offer, but her worth in the spirit world has definitely increased.

The world building in this volume was also entertaining, as Aoi gets a chance to see the spirit world outside of the inn, and meets Suzuran, a geisha who is also the sister of the receptionist. It turns out that Kijin is much more protective towards the people who work for him than Aoi was assuming. She also gets a chance to win over one of her earlier enemies in this volume, again due to the power of her cooking tailored towards the individual. Seeing the world open up a little more in this second volume drew me into the story much more than the first, and I’m intrigued by the references to Aoi’s grandfather and her growing friendship with the fox spirit Ginji, who seems to remind Aoi of her grandfather in mysterious ways. Seeing Aoi’s human ways start to influence the existing relationships between the spirits is interesting, and I’m curious to see how she begins to wield more influence due to her cooking habits and approach to human-spirit world relationships.

I still wish the art for this series had a bit more of a unique twist to it, but I enjoyed seeing the airships of the spirit world, the faceless handmaidens who prepare Aoi for an outing, and the continued practices of wearing masks, as Aoi has to hide her human nature when she’s away from the relative safety of the inn. I think I’m starting to see more signs of a deeper story emerge in the second volume of Kakuriyo: Bed and Breakfast for Spirits, so I am curious to see how it unfolds.

Ordinary girl suddenly discovering a world filled of spirits or yokai and having her life altered forever is a common trope in shoujo manga, it is subgenre that can be relied upon for some interesting storytelling. However, is there room for more translated yokai titles after such great series such as Kamisama Kiss and Demon Prince of Momomochi House?

Kakuriyo:Bed and Breakfast for Spirits is a light novel franchise with an anime adaptation as well, so that accounts for the multiple credits on the managa, which sometimes makes me a bit nervous. Aoi Tsubaki had a charming but shiftless grandfather who recently passed away. She goes about her daily interrupted by her visions of strange ayakashi, and she feeds homemade snacks to the more harmless ones. As she passes a shrine she sees an ayakashi who looks like a young man wearing a demon mask and she hands him her bento box after he complains that he’s hungry. When she passes by the spot later on that day to retrieve her bento, she finds it decorated with a fancy hair ornament and new wrapping cloth. A gate opens up and the ayakashi grabs her wrist, saying “Welcome to Kakuriyo, my darling bride.” 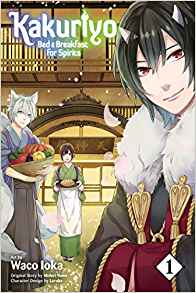 Kijin is an ogre and the master of Tenjin-ya, an inn for ayakashi. When Aoi refuses to become his fiancee, she offers to work at Tenjin-ya to pay off her grandfather’s debt, except none of the ayakashi in charge of the various functions of the inn are willing to hire a human. Aoi then meets Ginji, a nine-tailed fox with a series of different forms and he becomes her unofficial guide to the spirit world. As Aoi begins to become more aquainted with her strange new world, one constant that she takes with her is her joy in preparing food for people. I found the slice of life and food elements in this story entertaining. Where this title falls a little flat compared to similar series is the art. It works just fine, but without that something extra present that readers can find in the whimsy of Kamisama Kiss or the lush detail of The Demon Prince of Momochi House. I always hope that the opportunity to portray a spirit world will cause an artist to go wild with creativity and innovative character designs, but I wasn’t finding that in this series. I’m hoping though that the fact that the manga is an adaptation of a light novel series will mean that the plot will compensate for the art being less creative than I’d like for the subject matter. I did enjoy the setting in this first volume and I’m curious to see how the story unfolds.