It’s all-browser, all the time this month, as Melinda test drives JManga7 and Sean and Michelle take a look at some recent releases from JManga and VIZ. Device, OS, and browser information is included with each review as appropriate, to let you know exactly how we accessed what we read.

It’s no secret that we’re pretty big fans of JManga.com here at Manga Bookshelf. Their ability to provide access to a wide variety of manga coupled with competitive pricing and an attentive ear to customer concerns has proven to more than make up for the service’s weak points—inconsistent translation quality and (so far) limited delivery options, to name a couple. Particularly for those of us who like epic, older shoujo, smart josei, idiosyncratic one-shots, or really anything in the yuri catalogue, JManga has been something of a miracle in terms of providing us much longed-for content we’d lost hope of ever seeing in print.

Just before New York Comic Con this year, JManga announced a new website, JManga7, where fans could read a rotating selection of free older chapters of their ongoing series each week, with the option to read the most recent chapters for a monthly subscription fee of $5.99. What does $5.99 buy you? Let’s find out!

JManga7’s catalogue is large and growing consistently, with new chapters arriving seven days a week. (JManga7, get it?) Heavy release days, such as Thursdays (pictured below), provide an abundance of new content for subscribers with wide-ranging tastes (and at least something for pickier readers each day). In the week I looked at, 48 new chapters were offered over the course of the week. 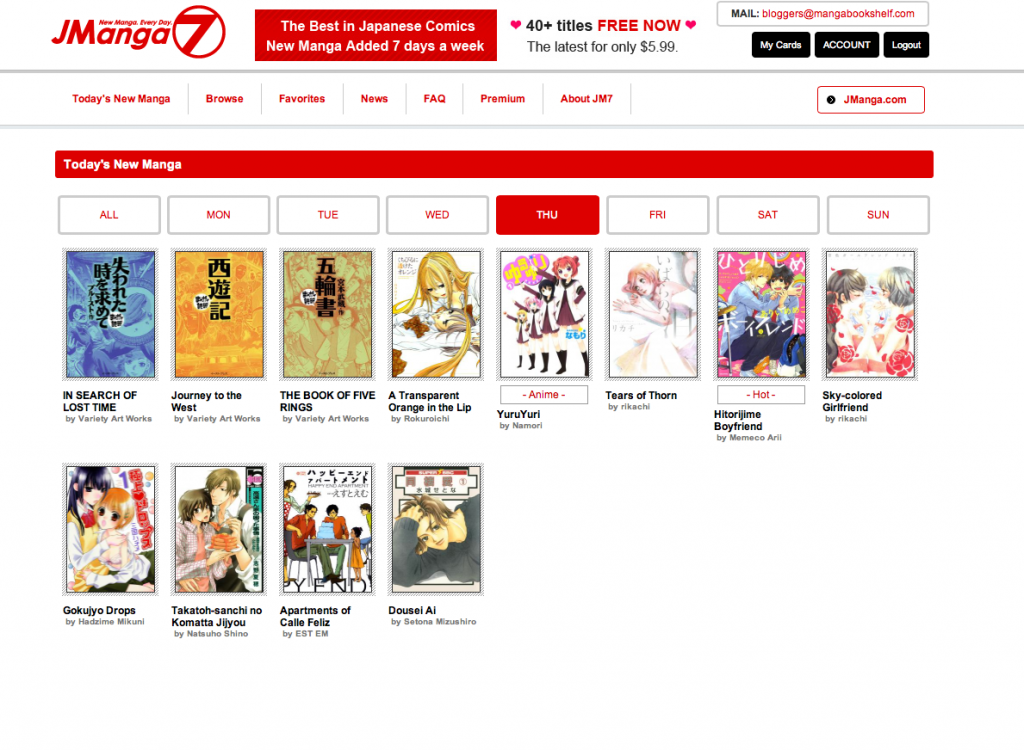 Though JManga7 suffers from the same limited delivery options as its sister site, its flash-based reader looks pretty good, loads quickly, and is easy to navigate. 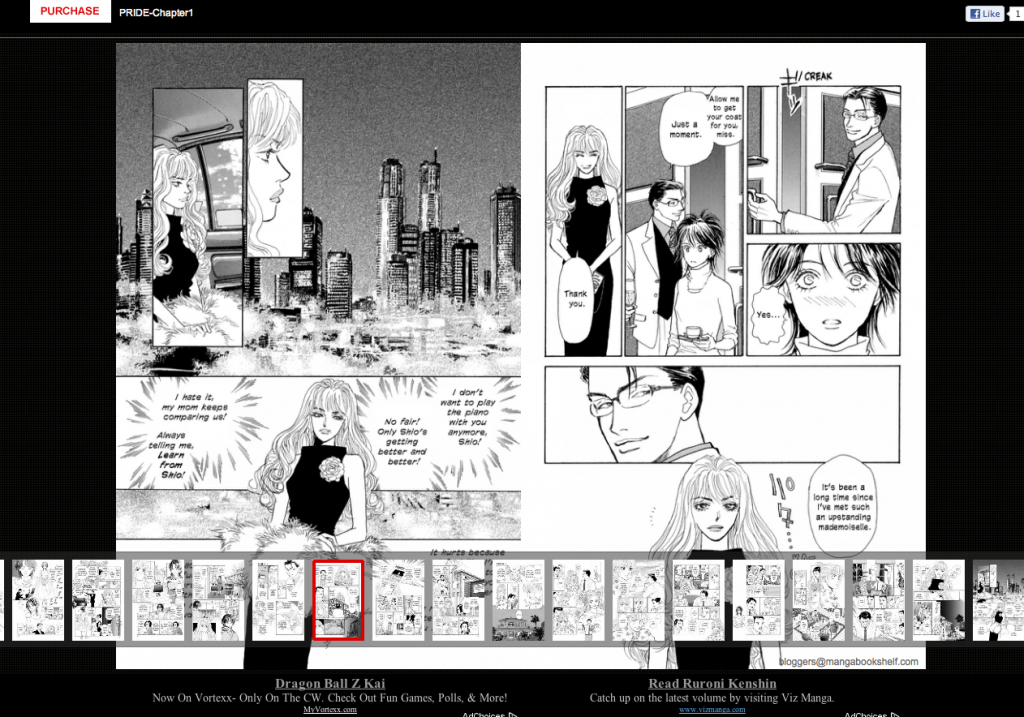 Like most flash-based manga readers, JManga7 offers left and right arrows (that appear on mouseover) for quick page-to-page navigation, as well as the ability to see and skip to any page in the chapter. Links to buy full volumes at JManga are strategically placed at the top of each page.

Though JManga7’s catalogue looks fantastic at first glance, some titles (like Yukari Ichigo’s josei series Pride, which I clicked on excitedly, and another Shueisha favorite Crazy for You) seem to be a bit of a tease, offering only a few sample chapters and nothing more. Oddly, too, text that encourages the purchase of full volumes at JManga offers no direct link to do so. Even the offer to “Be the first to review this series!” is a hollow one, as attempts to click reveal it to be nothing more than static text. 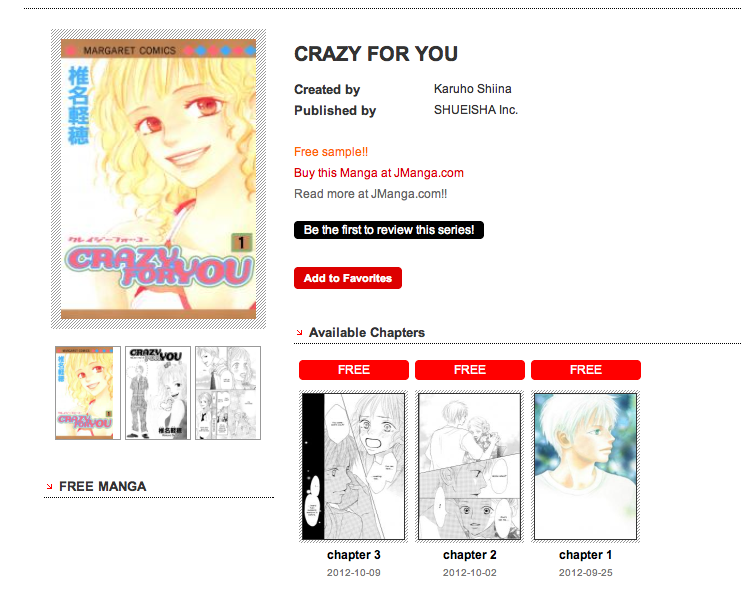 Even titles with premium chapters available may prove disappointing for existing JManga customers. For instance, Setona Mizushiro’s BL epic Dousei Ai has chapters 10-14 currently available to premium JManga7 subscribers only. While this works well for new customers, fans who have already been buying the series at JManga (where it is currently available up to chapter 32) will find nothing new at JManga7. And while it’s obvious that part of JManga’s strategy is to encourage JManga7 fans to buy the full volumes, that leaves little incentive for existing fans to sign up for premium access.

Much like JManga at the time of its initial launch, JManga7 feels a bit half-finished—burdened with features that appear to be not-quite-there and teaser content bulking up its fledgling catalogue. And though $5.99 a month is actually a pretty great deal for new readers who prefer low-committment, serialized content over serious collection, existing fans of JManga may be wondering what’s in it for them. – Melinda Beasi 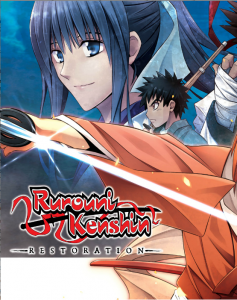 Rurouni Kenshin: Restoration, Chapters 1-5 | By Nobuhiro Watsuki | VIZ Media | Shonen Jump Alpha/VizManga.com | Windows 7, SeaMonkey 2.4.1 – Undoubtedly, there are bigger fans of Rurouni Kenshin than I, but it’s still a series for which I hold a great deal of fondness. I vividly remember picking up each volume of the manga as it was published each month (the first series to get that kind of accelerated release, I believe), and greatly enjoyed the anime, as well. (Well, not the often-atrocious filler episodes.) I firmly believe that the “Kyoto Arc” is one of the best storylines ever executed in shounen manga, and if other portions of the series were less well-done… well, I was inclined to be tolerant.

But now, here we have Rurouni Kenshin: Restoration. According to Shonen Jump Alpha‘s blurb, “To celebrate the upcoming live-action movie, Nobuhiro Watsuki reinvents the classic Rurouni Kenshin manga with all-new twists and turns.” I can understand why Watsuki might want to undertake such a project. In the first place, he’s never been able to replicate the success he had with Kenshin, and in the second, the original series does get off to a pretty slow start.

Restoration remedies this last issue by taking various shortcuts. Kenshin, Kaoru, and Yahiko meet under different circumstances, and villainous merchant Takeda Kanryu becomes a foe immediately. Neither Megumi nor Aoshi is under his employ, however, but he’s still got that gatling gun of which he is so fond. Sano still makes his first appearance as someone who’s been hired to fight Kenshin, but he already possesses his Mastery of Two Layers technique. The personalities of the characters are intact, though, so this streamlined introduction doesn’t ruffle my feathers too much.

Perhaps the most striking difference so far involves Saito Hajime. After six occasionally dull volumes, the original series is reinvigorated in the seventh with the introduction of Saito, who comes after Kenshin, grievously wounds Sano, lures Kenshin out with a note, and hangs out at the dojo for a while until Kenshin gets back, at which point they have an epic duel. It’s exciting stuff! He does eventually become an ally as they work together to combat madman Shishio during the Kyoto Arc, but they’re never truly friends.

In Restoration, we get our first glimpse of Saito in chapter three, which led me to wonder… how is Watsuki going to depict their battle this time? Surely, that’s one aspect of the story that needs no reinvention! The answer (at least so far) turned out to be… what battle? Instead, the guys meet and talk about how Kenshin is unable to find a place to belong in the new era. That’s it. So, basically, Watsuki just skips straight to the “uneasy allies” stage of their relationship.

Yeah, okay, I know this isn’t supposed to be a strict retelling. What would be the point in that? But the point remains… while there are definitely segments of the original manga that could benefit from a more streamlined approach, I would not classify anything from volumes seven through eighteen in that category. I’m kind of worried now about what will happen with the Kyoto Arc. Will it even exist? Do I want it to exist, given that it will be undoubtedly changed? I really don’t know.

At the moment, I still plan to check out new chapters of Restoration as they appear, but will maintain a dubious air whilst doing so. – Michelle Smith 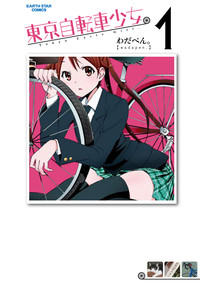 Tokyo Cycle Girl, Vol. 1 | By Wadapen | Earth Star Entertainment, Comic Earth Star | JManga.com | Windows XP, Firefox 16.0
Sometimes you read a series because it immediately grips you, you latch on to a character right away, or you just have to find out what happens next. But those series don’t come along every day. Far more often you get the series that raise a smile, or have some potential, or pass the time. A series where your immediate reaction is “Yeah, I guess I’d read another volume of that.” Tokyo Cycle Girl is such a series. It does a lot of little things right, and is easy to follow, so is a nice, fast-paced, relaxing read. It only has one big flaw, which is a stunning lack of originality.

I need to mention that up front, as there’s a chance someone might think that this series might have something they haven’t seen eighty times before. Get those thoughts out of your head. This isn’t done in 4-koma style, but in every other aspect it follows at the feet of all the moe high school club manga circa Haruhi/K-On!/Lucky Star. The lead, Iruka, is a bubble-brain country girl who’s new to Tokyo, but filled with excitement, energy, and naive awe at absolutely everything about Tokyo. Katou, her roommate, has already grown used to the city, and finds Tokyo to be suffocating, with all the places and people looking the same to her. She’s a long-haired beauty, but seemingly cold and reserved. Of course, as Iruka finds out, she’s also very much a tsundere. Meanwhile, if I told you the other two main characters in this volume were a sporty tomboy who tends to speak first and think later and a yamato nadesico princess type whose aura of calm can make almost anyone bow to her, you wouldn’t be a bit surprised.

That said, aside from the stunning unoriginality, this manga doesn’t do anything else wrong. The author seems to know he’s dealing with types, so exaggerates them beyond belief right from the start. Iruka isn’t just perky, she’s beyond hyperactive, bouncing off the walls and floor when first reaching her dorm room. Yukimi isn’t just a perfect princess, but does a perfect tea ceremony the moment she and Iruka meet, and is already exuding enough ‘motherly’ vibes to fell the entire cast. The other interesting thing was the bicycle talk. All the characters ride bikes, ranging from the latest sport style to Iruka’s old-fashioned junior-high style bike. We get detailed looks at the various bike styles and accessories around Tokyo (along with frequent asides from the author), and bike knowledge definitely seems to be this series’ ‘hook’. Which is enough, along with the likeable cast, to keep me wanting to read more, even if this is The Return of K-On! Vol. 35, with Bicycles. -Sean Gaffney