Last week at Experiments in Manga I posted an in-depth review of Human Acts, an incredibly beautiful, tremendously powerful, and absolutely devastating novel by South Korean author Han Kang. (Some may recognize Kang as the author of The Vegetarian which has earned her a fair amount of international attention and acclaim.) Human Acts is one of the best books that I’ve read in quite some time, but it’s a chilling and challenging read due to its subject matter. The book focuses on the violent Gwanju Uprising and its long-lasting aftermath, however it’s not at all necessary to be familiar with that particular incident to understand and appreciate the novel.

Elsewhere online, there was some very exciting licensing news: Pantheon Books will be releasing Gengoroh Tagame’s My Brother’s Husband! The impending English-language release has been hinted at, but now it’s official and I’m absolutely thrilled. Digital Manga’s Juné imprint also had a few licensing announcements from Yaoicon: Velvet Toucher’s Eden’s Mercy, the third volume of Yoneda Kou’s Twittering Birds Never Fly, and Junko’s The Prince’s Time. And over the weekend Yen Press slipped in an announcement for the acquisition of Tsukumizu’s Shojo Shumatsu Ryoko. A few other interesting things that I came across last include a video of Viz Media’s SDCC 2016 Panel, the Comic Book Resources feature “20 Years Ago, Dragon Ball Z Came to America to Stay,” and Otaku Champloo’s BL Manga Starter Kit. Also, a couple of recent queer comics Kickstarters caught my eye: Ngozi Ukazu’s already massively successful campaign to release Check Please!, Year Two and a project to raise funds for the final volume and omnibus edition of Jennie Wood’s Flutter.

Attack on Titan, Volume 19 by Hajime Isayama. For a while there I was starting to become a little weary of the sheer number of plot twists in Attack on Titan. Instead of renewing my interest in the story, I started to lose confidence in it. However, the more recent volumes of the series have regained some focus. The story developments and turns in the story are more exciting because of it, even if there are still a few major mysteries which have yet to be fully explained. The nineteenth volume of Attack on Titan is an exciting one as a massive confrontation between a contingent of intelligent Titans and the decimated Survey Corps begins. Eren, Mikasa, Armin, and the rest will have to directly face off against the Armored Titan and the Colossus Titan, knowing that the humans controlling them were once their comrades. It’s a kill-or-be-killed situation with very little room for negotiation. The action sequences in the nineteenth volume are dramatic and well-done, but the most notable aspect of the manga is probably the psychological impact that the battle for survival against one-time friends has on the characters. Also, for Attack on Titan fans who are interested in Levi and Erwin, the special edition of the nineteenth volume comes along with the second and final part of the No Regrets OVA anime adaptation. I haven’t had a chance to watch it myself yet, but I am glad that it’s available and am looking forward to seeing it. 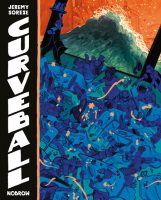 Curveball by Jeremy Sorese. Although I’m only now finally getting around to reading Curveball, I’ve actually been meaning to for a while now. The comic was first brought to my attention when it became a finalist for the 2016 Lambda Literary Award for best LGBT Graphic Novel. And then at TCAF 2016 I had the opportunity to hear Sorese talk about Curveball specifically and queer science fiction in general. There are two things in particular that I especially love about Curveball. The first is the inherent queerness of the characters and worldbuilding. Numerous genders are represented in the comic and relationships, romantic and otherwise, occur in a multitude of combinations. The main character, Avery, is non-binary and there are a fair number of others who are genderqueer or genderfluid as well. This isn’t at all a big deal in the comic, it’s simply a natural and unobtrusive part of the setting. The second thing that I particularly enjoyed about the comic is Sorese’s use of color. The illustrations in Curveball are primarily grayscale except for the use of an extraordinarily vibrant and literally fluorescent orange to represent technology, and more specifically energy. The effect is very striking. Curveball is mostly about relationships, but the characters are also dealing with a developing energy crisis. The fluorescent orange and the occasional lack thereof is a constant visual reminder of this.

The Seven Deadly Sins, Volume 15 by Nakaba Suzuki. The stakes can’t get much higher than they are at the moment in The Seven Deadly Sins seeing as the fate of the entire world is in grave peril now that the extraordinarily powerful demons known as the Ten Commandments have been released. Granted, just about everyone and everything in The Seven Deadly Sins is extraordinarily powerful, so it’s sometimes difficult to get a good feel for the grand scale of the series; the shock and awe is frequently lost. Despite the tremendous abilities that everyone has and despite the massive amounts of damage dealt to both people and property, it ends up coming across as common rather than impressive. Recently Suzuki has resorted to having Hawk actually announce the combat classes and magic levels of the various characters are, but that just seems superfluous when there is effectively no difference between a class level of 3,370 and 5,500 on the page. Even so, the fight scenes and battle sequences somehow still manage to be engaging and entertaining and are honestly one of the best things about the series. The fifteen volume of the manga sees the Seven Deadly Sins starting to fight off the Ten Commandments on two separate fronts. First they must try to fend off the Commandment’s minions and are largely successful, but eventually one of the demons appears to confront them directly. By the end, things aren’t looking good for the Deadly Sins.

Yona of the Dawn, Volume 1 by Mizuho Kusanagi. Even if it wasn’t for the fact that I tend to enjoy epic fantasy series with strong female leads, the amount of excitement surrounding the anime adaptation and the licensing announcement for the original manga series in English would have been enough for Yona of the Dawn to catch my attention and interest. Admittedly, Yona spends a large part of the series’ first volume in shock and barely able to function. The reason is understandable–she has witnessed the murder of her beloved father the king at the hands of one of the people she most loved and trusted in the world. The unexpected betrayal leaves her stunned; the only reason she avoids a similar fate is that her personal guard whisks her away from the palace. However, the very beginning of the volume implies that Yona will take control of her own destiny. That’s the story that I really want to read. I want to see Yona overcome her tragic circumstances, to find the strength to protect herself and those she loves. If the manga is able to deliver its promise (and I suspect that it will), Yona of the Dawn will indeed be a series well-worth following. While Yona comes across as weak and helpless for a significant portion of the first volume of Yona of the Dawn, showing Yona at her lowest does provide the necessary setup required for dramatic story and character developments. I’m definitely looking forward to reading more of Yona of the Dawn.