Jennifer Doyle’s series Knights-Errant had its beginnings as a webcomic in 2009. It was Doyle’s first attempt at a long-form comic. Somewhat unsatisfied with how the story’s structure was developing, Doyle decided to reboot the series as Knights-Errant: Pavane. The subtitle was eventually dropped and Knights-Errant ultimately became a part of Chromatic Press’ online multimedia magazine Sparkler Monthly in 2015. As a beautifully illustrated, queer-positive historical fantasy with compelling characters and engaging story, Knights-Errant was a perfect addition to the lineup. In 2016, the first volume of Knights-Errant was released in both print and digital formats. The book is in full-color and collects the first three chapters of Knights-Errant serialized online between 2015 and 2016 in addition to content not previously released: a short comic, “Anton & Beppe,” exploring the backstory of those characters, and a short story, “Justice,” written by Doyle’s partner Ursula Wood and featuring the characters Kadeen and Oswald.

The city of Adigo in North Vetal is under siege by the army of its own king. The population is slowly starving, essentially being held hostage by an influential but traitorous margrave whose loyalty to his god comes before his faith in the monarchy. Not all of the margrave’s soldiers share or support their commander’s fervent beliefs, however. At least one guard, Beppe, is working to end the deadly impasse by conspiring with a criminal. Wilfrid, after some amount of convincing, has become vital to Beppe’s plans. Jailed for stabbing two men, Wilfrid is given a choice: certain death by hanging for the crime or almost certain death by attempting to guide the king’s forces into the city. But only the latter gives Wilfrid the chance of surviving long enough to seek retribution and exact revenge. Wilfrid’s fundamental goals may only temporarily align with those of the soldiers who are are hoping break the margrave’s self-destructive control over the city and its people, but it is a risk that they are all willing to take. 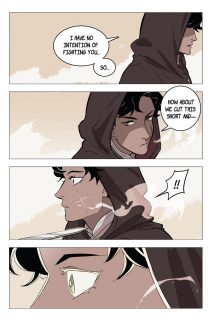 Doyle has on occasion described Knights-Errant as a “hate/love letter” to Kentaro Miura’s Berserk. While that influence and inspiration can be seen in the comic, Knights-Errant is more than just a response to a single series–it is a brilliant work based completely on its own merits and worth. One of the many things that I particularly love about Knights-Errant, and one of Doyle’s intentions behind its creation, is the inclusion of queer themes and representation. Notably in the first volume, Wilfrid’s gender is naturally complex and Beppe’s closest and most intimate relationship is with his fellow guardsman Anton. But these sorts of personal qualities make up only one aspect of the series’ believably imperfect and multi-faceted characters. The layered portrayal of both the antagonists and protagonists–many of whom are dealing with traumatic pasts, grim presents, and potentially tragic futures–is excellent. The evocative artwork, colored with subdued but striking tones, seems to effortlessly carry and support the emotional weight demanded by the story. However, in part due to the comic’s admittedly dark and sardonic sense of humor, Knights-Errant does manage to avoid being overly oppressive.

Knights-Errant is a nuanced tale of politics, religion, intrigue, and revenge. It’s amazing how high the stakes have already risen in the first volume with the main players and the beginnings of the underlying plot having only just been introduced. The fate of a city and the lives both within and outside of its walls are at stake, and the threat of psychological and physical violence that the series’ main characters must personally face is tremendous. The entire situation is extremely volatile and everyone knows it–whatever happens next will not only have a major impact on the people who are directly involved, it may very well change the course of history for the kingdom as a whole. The tension and pacing in the first volume of Knights-Errant is magnificent, the intertwining complexities of the characters’ individual stories unfolding within the context of a much larger narrative developing on an even grander scale. Everything about Knights-Errant is intense in the best way possible, from the sophisticated dynamics of the characters’ relationships, to the intricacies of the plot and fully-realized setting, to the dramatic and expressive artwork. The comic is incredibly easy to recommend.