I think I’m finally getting back to my regular posting schedule. I get the week between Christmas and New Year’s off of work which is letting me catch up on a few things. (Sort of. Life has still been rather hectic of late.) Last week I posted an in-depth review of one of Chromatic Press’ most recent paperbacks, Jessica Chavez’s debut novel Dead Endings, illustrated by Irene Flores. The novel has a fantastic combination of horror, mystery, and snark, making it both fun and frightening. I’m looking forward to reading its sequel a great deal. And because the end the 2015 is fast approaching, last week I also posted my annual list of notable manga, comics, and novels of the year.

Apple and Honey / His Rose Colored Life by Hideyoshico. I wasn’t previously familiar with Hideyoshico’s work, but after reading the boys’ love collection Apple and Honey and its sequel/spinoff His Rose Colored Life, I sincerely hope that more is translated. In addition to the unrelated three-part story “Shades of Summer at the End of the World,” Apple and Honey introduces Natsuki and Komano who are the focus of His Rose Colored Life. Hideyoshico’s characterization is excellent—the characters have depth and the development of their relationships are entirely believable. Komano is this lovable outgoing goofball while Natsuki is much more reserved and unsure of himself. I was especially impressed by the sensitive portrayal of Natsuki’s anxieties and insecurities. While he desperately wants to be loved, he is also terrified of it, having been repeatedly hurt in the past; it’s hard for him to accept that it’s okay for him to be happy. (Natsuki also gets bonus points for majoring in information science which I hold a degree in but have never before seen in a manga.) Komano and Natsuki together make a wonderful couple, nicely balancing each other’s personalities.

Lone Wolf and Cub, Omnibuses 3-5 (equivalent to Volumes 6-12) written by Kazuo Koike and illustrated by Goseki Kojima. The omnibuses are rather chunky, but I am so glad that Dark Horse is releasing Lone Wolf and Cub in a larger trim size; the previous edition was so small as to be nearly unreadable with my bad eyesight. Plus, it’s nice to be able to see Kojima’s excellent artwork more clearly. Lone Wolf and Cub is a fantastic series. Although there is an ongoing story to the manga, the individual chapters tend to be somewhat episodic. Ogami Itto was once the shogun’s official executioner but after being framed as a traitor he has become an assassin seeking revenge. Accompanying him on his journey is Diagoro, his now three-year-old son who has known nothing but a life filled with death. Lone Wolf and Cub is a violent series. Ogami is an incredibly skilled and resourceful warrior, surviving multiple attempts on his own life even as he is hired to end those of others. But he is also a father. Some of the most compelling chapters in the manga examine the depth of Daigoro and Ogami’s bond more closely.

Milkyway Hitchhiking, Omnibus 2 (equivalent to Volumes 2-3) by Sirial. I’m not entirely certain, but I believe that with the second omnibus Milkyway Hitchhiking is complete. (Because the manhwa is a series of largely unrelated stories, it can be difficult to tell.) Whether or not it is actually finished, Milkyway Hitchhiking continues to be a beautiful series. The full-color artwork is gorgeous, Sirial changing art styles and color palettes to better suit the mood of each of the stories. The manhwa ranges from brightly colored, upbeat tales to those that are more somber and melancholy. Some are based in reality while others incorporate elements of horror, science fiction, or fantasy. The only thing that really ties the individual stories in Milkyway Hitchhiking together is the presence of the Milkyway, a space-time cat. Although she’s the titular character, Milkyway Hitchhiking isn’t necessarily about Milkyway herself. She frequently has an important role to play, however the focus of the series is much more on the stories of the people she encounters.

Two reviews were posted at Experiments in Manga last week, one of a manga and one not. The first review was part of my Year of Yuri monthly review project. I took a look at Milk Morinaga’s Gakuen Polizi, Volume 1, which is quite different from her other work currently available in English. The first volume at least is less of a romance and more of a buddy cop story, but it’s still fairly entertaining. (She does promise that more of the drama in the second volume will be romance-related and less crime-related, though.)

My second review last week was of Tokyo Demons, Book 2: Add a little Chaos, a novel written by Lianne Sentar with illustrations by Rem. In case it isn’t clear from the review, I absolutely adore Tokyo Demons. It can get pretty dark and heavy, but it’s a fantastic series. The second volume should be available as an ebook later this month and the print edition is currently scheduled for release in October. (Tokyo Demons is one of Chromatic Press and flagship series, so in the meantime it can also be read online at Sparkler Monthly.)

Once again I wasn’t actually online much last week, but I did catch a few things that other people may be interested in: Over at Comics Forum, Martin de la Iglesia writes about Early manga translations in the West. Kate at Reverse Thieves explains How the Library Became My Go-to Place for Manga and Comics. (I posted a bit about finding manga at the library a little while back, too.) And on Twitter, manga scholar and translator Matt Thorn hints that a project with Moto Hagio is in the works. Let’s hope so!

Honey Darling by Norikazu Akira. After reading and enjoying Beast & Feast I decided to track down more manga by Akira available in English. This led me to picking up Honey Darling. The manga isn’t the most realistic or believable, but it is cute, delightful, funny, and very sweet. Chihiro is a young man without any real goals in his life until he takes in a stray kitten. When Shiro falls ill, Chihiro ends up working as the live-in housekeeper for Kumazawa, the vet who treats her, and helping out in the animal clinic. Honey Darling has a lot going for it: nice art, a sense of humor, adorable cats and dogs, amusing and ttractive leads, likeable side characters (including women!), and so on. Ultimately Honey Darling is a boys’ love manga, though. As might be expected, Chihiro and Kumazawa become more than just roommates by the time the manga ends, but the development feels more like Akira fulfilling a requirement of the genre rather than being something that was necessarily called for by story itself. Still, I did enjoy Honey Darling a great deal, the two of them made me happy as a couple, and the manga frequently made me smile.

Lone Wolf and Cub, Omnibuses 1-2 (equivalent to Volumes 1-5) written by Kazuo Koike and illustrated by Goseki Kojima. One of the first manga to be translated into English, Lone Wolf and Cub wasn’t released in its entirety until Dark Horse picked up the license. Sadly, the first Dark Horse edition was tiny and, while extremely portable, was difficult to read because the text was so small and crowded. Additionally, those original twenty-eight volumes have steadily been going out of print. Thankfully, Dark Horse recently started releasing Lone Wolf and Cub in an omnibus format with a larger trim size. Though quite hefty (each omnibus is around 700 pages and collects about two and a half volumes or so), the reading experience is much improved overall. Lone Wolf and Cub is an excellent series, so I’m very glad that the manga will remain in print for a bit longer. The series is fairly episodic, following the titular Lone Wolf and Cub: Ogami Ittō, who once served as the Shogun’s executioner but who has become an assassin-for-hire out of revenge over the destruction of his family, and his young son Diagorō.

Mail, Volumes 1-3 by Housui Yamazaki. Summer is the time for ghost stories in Japan, so I felt it was appropriate to finally get around to reading Mail. I came across this short series thanks to The Kurosagi Corpse Delivery Service which shares the same illustrator. Reiji Akiba–detective, exorcist, and the protagonist of Mail–actually briefly appears in the fourth volume of The Kurosagi Corpse Delivery Service as well. One of the things that particularly struck me about Mail is how often the stories incorporated modern technology such as cell phones and computers. It’s as though traditional ghost stories and urban legends have been updated for a contemporary audience. Occasionally Akiba will present a sort of prologue to the individual chapters, giving the stories an almost Twilight Zone feel to them. Mail can be legitimately creepy and at times a bit bloody, but gore is not at all the focus of the series. In general Mail is episodic, although the final volume adds a recurring character who becomes Akiba’s assistant as a sort of homage to Osamu Tezuka’s Black Jack.

Stone Collector, Book 2 written by Kevin Han and illustrated by Zom-J. I want to like Stone Collector more than I actually do, but at this point I can’t really say that I’ve been enjoying the manhwa much at all. It’s not all bad. The artwork in particular has moments when it can be impressively dynamic. The character’s facial expressions are great. Even the basic premise of the story isn’t terrible. As a whole though, Stone Collector just isn’t working for me. Though it moves along quickly, the plot is thin and the characters are underdeveloped, almost as if it’s an outline or draft than a finished product. The second half of the second volume of Stone Collector of is devoted to a side story, “Land of Ice.” I was more interested in “Land of Ice” than the main story more because of its tundra setting than anything else, but it still frustrated me and had many of the same problems that Stone Collector proper has. November 2013 was the last time there was a Stone Collector update. I’m not sure if there are plans to release more (it may simply be that “more” doesn’t exist yet), but the story clearly hasn’t reached its conclusion yet. 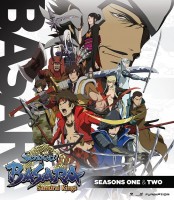 Sengoku Basara: Samurai Kings, Season 2 directed by Kazuya Nomura. While I was entertained by the first season of Sengoku Basara: Samurai Kings, I really enjoyed the second season. While there are still fantastically outrageous fights and action sequences, there’s also more focus on the characters and their characterization and on battle strategies and tactics. Personally, I appreciate the added context this gives the series. The characters, who continue to be magnificently and ridiculously overpowered, come across as a bit more human since their pasts and motivations are clearer. Their confrontations carry more emotional weight because of this as well. Miyamoto Musashi makes an appearance in this season, too. I was greatly amused by the fact that he fights with a giant oar. (Legend has it that Musashi once forgot to bring a sword with him to a duel and so carved a bokken out of the oar he used to get there; this why his weapon choice in Samurai Kings is simply perfect.) Samurai Kings is a tremendous amount of fun. Based on a video game that’s nominally based on actual events and historic figures, it’s wonderfully absurd and irreverent.