By Milk Morinaga. Released in Japan by Futabasha, serialized in the magazine Comic High!. Released in North America by Seven Seas.

When we last left our heroines, Mari had decided that her love was never going to be requited, and had decided to move on – sort of – and tell Akko that she’d gotten a boyfriend and had gone all the way. This leads us to the first half of this omnibus, which is Akko trying to figure out why this makes her jealous, and dealing with her own newly discovered feelings for her friend. The focus shifting to Akko is very welcome, as though she’s the outgoing one of the pair she is not necessarily more worldly or mature. We see flashbacks to her childhood that show her being very much a solitary person, and even when she made friends (via discussion of fashion and makeup) they didn’t seem to be lasting friendships. This is when she latched onto Mari. 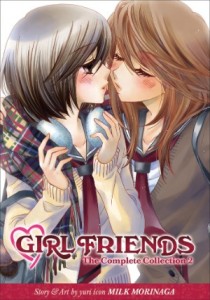 It’s interesting how Mari and Akko both have misunderstandings about the nature of their relationship, but in ways that are true to their characters. Mari is basically negative, with a “no girl could possibly like me in that way” sort of attitude. While Akko’s problem is that, after kissing Mari impulsively at karaoke, she assumes that all is now well and they *are* together, not realizing that actually discussion of such feelings is needed. This is not helped by Mari’s naivete – one of the best lines in the book is Akko’s exasperated “You don’t usually slip a friend the *tongue*, got it?” That said, this makes it all the more satisfying when they do finally connect and get together as a couple.

Of course, what does that entail? Since they’re both girls, going out together, texting each other late at night… they’ve done that before as just friends. So what’s different? Sexual attraction, of course, and unlike many a mainstream yuri (or faux-yuri) manga the author does spend a fair amount of time dwelling on this. Given both girls lied to each other about their sexual experience, each worries that they’ll screw things up somehow. (This leads to Akko looking at German Porn sites to see how girls do it, which made me laugh out loud). Eventually the two do take things to the next level, in a scene that sort of rides the edge of the OT rating that Seven Seas gave the book.

There is talk of the future, but it’s mostly the same sort of talk you’d find in books with a het romance – Akko’s going to a different school than Mari, leading to stress, but you know their love will see it through, etc. There’s a brief discussion of telling their friends and family about their relationship, but that’s not something that happens in the manga itself, nor do we see any of the fallout that might arise from being a lesbian couple in Japan. This is a seinen yuri fantasy for men that ran in Comic High!, after all. Reality is not welcome in its hallowed halls.

With all that said, I don’t think the manga suffers all that much from avoiding the harsher aspects of Mari and Akko’s relationship. This is meant to be adorable moe romantic fluff, and it succeeds admirably. The emphasis is more on romance here in this 2nd omnibus, but I was pleased to see that friendship is still given a huge spotlight – Sugi gets to be the ‘mature adviser’ type of friend, Tama-min the eccentric cutie, and we even get more development from Kuno and Taguchi, the other two girls in the main circle of friends. I was pleased to see that there was no effort made to pair up the other girls with each other… even though this isn’t overly realistic, having what’s called a “cast Full Of Gay” might have strained my credulity a bit.

It goes without saying that this is a great series that fans of yuri (and moe) will adore. That said, I do have one more very important complaint. If Akko is cosplaying Lum, then Mari should be Ataru… but she just doesn’t have the personality for it. Tama-min seems to have her cosplaying as Ryuunosuke, which she’s also unlikely to pull off, but I can see it if I squint. But if she’s doing Ryu, Akko needs to be Nagisa… which leads to even more problems. Tama-min needs to think these things through! Geez!

(Also, two of those omakes make me think that Milk Morinaga has watched too many 80s American sex comedies… Getting Lucky specifically.)

SEAN: There’s nothing that really inspires me on this week’s Midtown list, so I’ll go with something that my own comic shop is getting but Midtown isn’t. The second and final omnibus of Girl Friends completes the collection, and I am pleased that we got a print release of it from Seven Seas even with JManga releasing it digitally earlier in 2012. This is a different and more fluid translation, but mostly I enjoy just having this coming-of-age yuri story in my hands as a book. There aren’t many yuri stores that make it over here, so I cherish each one. And they’re a cute couple, too!

ANNA: I will pick the second volume of 07-Ghost. I enjoyed the first volume more than I expected to, and I’m hoping that the interesting world building and mystical action continues to entertain in the second volume.

MELINDA: There are a couple of things I’d like to pick up this week, enough that it’s difficult to choose, but in the end I’ll give my vote to the second omnibus of Loveless. From my review of omnibus volume one: “There’s so much going on … that it comes close to being a train wreck, but if there’s one thing I’ve learned over the past few years, it’s that there is no train wreck I love more than a Yun Kouga train wreck. And this, I think, really comes down to characterization. Like a couple of my other Kouga favorites, Crown of Love and (the very different) Gestalt, the strength of the story is that everyone is really interesting. Even when she’s adhering to standard tropes (in this case, BL and shoujo tropes), Kouga doesn’t write standard characters. Everyone in Loveless is kind of a weirdo, in the same way as most actual people are weirdos. They have layers of sometimes-contradictory issues, little idiosyncrasies, both attractive and unattractive flaws—and these are all a real part of the story.” More, please.

MICHELLE: I’m also going to cast my vote for Loveless. I’d heard a little about it when TOKYOPOP was releasing it, but mostly it was all the potentially squicky bits. I was pleasantly surprised to enjoy it as much as I did, and that’s entirely due to the endearing characters. In the Off the Shelf column Melinda linked to, I compared its strong characterization and somewhat hazy plotting to Pandora Hearts, and I continue to stand by that comparison. It’s not just any manga that can make me stop worrying about things making sense, but these two series manage it!