I was a little preoccupied last week, dealing with some unexpected developments at work and home, so I wasn’t online much at all. However, I did still manage to post September’s Bookshelf Overload in which I reveal the manga, comics, books, and anime that I picked up last month. Also, a few weeks ago I mentioned the short story “The Mud God” which is tangentially related to a commission that Jenn Grunigen wrote for me. Well, it’s now freely available to read online! 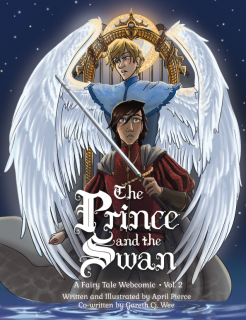 The Prince and the Swan, Volumes 1-2 by April Pierce and Gareth C.J. Wee. Pyotr Ilyich Tchaikovsky’s ballet Swan Lake, itself based on Russian folklore, has been the inspiration and basis for countless other works. One of the more recent retellings that I’m aware of is the webcomic The Prince and the Swan which began in 2013. I discovered the comic while at the 2016 Toronto Comics Arts Festival where the second print volume was making its debut; I couldn’t pass up Swan Lake reimagined as a queer fairytale. Knowledge of the ballet’s story isn’t at all necessary to enjoy The Prince and the Swan although readers who are familiar with it will be in a better position to appreciate the changes made for the comic. The basic premise of the story remains the same, but in the case of The Prince and the Swan Odette is now Odet, a prince who suffers from a curse that transforms him into a swan during the day. The other lead character in the comic is Prince Siegfried who is reluctantly preparing for his coronation and marriage as king. A chance encounter between the two men will change the course of both of their lives. The pacing of The Prince and the Swan seems a little slow at first, but the artwork, characterization, and storytelling quickly improve and gain confidence as the comic progresses. I look forward to seeing how The Prince and the Swan continues to develop.

Say I Love You, Volume 15 by Kanae Hazuki. One would think that after fifteen volumes Say I Love You would no longer surprise me, but I continue to be impressed by its honesty and authenticity. I do wonder if the recently introduced Aoi twins will continue to play a role in the series as most of the main characters are graduating high school in pursuit of their individual futures. While I was initially a little unsure of the addition of prominent new characters so late in the series, I ended up really liking them and their story arcs–I’d now hate to see them discarded so soon. (Granted, Kai still has another year to go before he graduates, so I wouldn’t be surprised if the twins will continue to make appearances.) The fifteenth volume of Say I Love You would have been a natural ending point for the series. As many of the characters are preparing to go their separate ways, either by immediately entering the workforce or by continuing their education, a fair amount of time is devoted to introspection and reflection on the past. Mei in particular has changed significantly since the beginning of the series, but all of the characters have grown and matured as individuals. The characterization in Say I Love You has always been one of the series’ strong points. It will be interesting to see where the manga goes from here as both the story and characters move beyond high school.

Run, Melos! and Other Stories by Osamu Dazai. I forget exactly when it was that I first learned of Dazai’s short story “Run, Melos!” but it’s more or less a staple of the Japanese education system so references to the work are fairly common in Japanese popular culture. I’ve been wanting to read to story for quite some time but was under the mistaken impression that it wasn’t actually available in English. However, I recently discovered that it had indeed been translated as part of the Kodansha English Library series… which was only ever released in Japan. Thanks to the power of inter-library loan, I was finally able to read “Run, Melos!” along with six of Dazai’s other works of short fiction: “A Promise Fulfilled,” “One Hundred Views of Mount Fuji,” “Schoolgirl,””Cherry Leaves and the Whistler,” “Eight Scenes of Tokyo,” and “One Snowy Night.” I had previously read another translation of Schoolgirl but the other stories were all new to me. Normally when I think about Dazai it’s his tragic novel No Longer Human that immediately comes to mind; I had actually forgotten how humorous some of his stories can be. Even though there is still a fair amount of melancholy to be found, this humor is much more apparent in Run, Melos! and Other Stories. Overall, the volumes a charming collection of stories mostly set in early twentieth-century Japan (the exception to that being “Run, Melos!” itself) with surprisingly relatable characters.