By Fujita | Published by Kodansha Comics 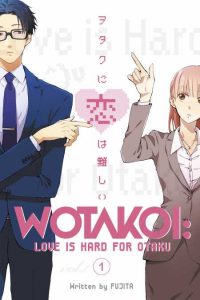 Narumi Momose and Hirotaka Nifuji were childhood friends and reconnect as adults when they discover they work at the same office. Narumi is hiding the fact that she’s a hardcore fujoshi, especially since she’s lost several boyfriends because of it, while Hirotaka isn’t making any attempt to hide his video game fixation. After listening to her complain about her latest heartache and asking, “Why can’t you just find a guy who accepts you as an otaku?,” Hirotaka suggests himself as an alternative and they start dating. Wotakoi, befitting its webcomic origins, is essentially a series of vignettes about their relationship with each other and with their otaku friends (and combative couple) Hanako Koyanagi and Taro Kabakura.

I must say that at this point it’s a little hard to see what exactly Hirotaka sees in Narumi, but he himself is pretty awesome. He can tell when she isn’t feeling well when no one else can (even when it turns out she’s only sad ‘cos a favorite character died), he is willing to executive a kabedon on Kabakura for her enjoyment, and, best of all, he patiently helps with her BL doujinshi when she’s up against a deadline for Comiket. He’s supportive and non-judgmental of her hobbies, and when she worries they’re just settling for each other, he tells her, “We’re together because I love you and I like seeing you doing things that make you happy.” Hirotaka is really great. I wish Narumi would make a similar declaration of love for him. Maybe that’ll come eventually.

Also great are Koyanagi and Kabakura. Normally, characters who spend this much time bickering and calling each other “ugly” and “idiot” would not be my favorites. In fact, I’d find them troubling. In this case, though, there’s enough chemistry and underlying affection between the two that it works. Kabakura is the most normal of the bunch, though he’s not hiding his hobbies, claiming, “I just know how to enjoy things in moderation.” Koyanagi is really into cosplay and, despite her generous bosom (which gets a lot of attention, especially when compared to Narumi’s lack of same), excels at portraying cool bishounen types.

All of the characters are fun and I enjoyed spending time with them, but it’s probably pretty obvious that Hirotaka is my favorite. This two-in-one omnibus ends with the prospect of he and Narumi going on a proper date, which makes me happy. The vignettes are amusing and I enjoy them, but I’d also like to see their relationship progress and for our stoic-seeming hero to have more reasons to smile.

Wotakoi is ongoing in Japan, where five volumes have been released so far. Kodansha will release the second omnibus, containing volumes three and four, next Tuesday.