The last two years have been kind to Satoshi Kon fans: Dark Horse and Vertical Comics have each released two volumes of Kon’s manga, from Tropic of the Sea, a supernatural mystery, to Seraphim 266613336 Wings, an unfinished collaboration with Ghost in the Shell director Mamoru Oshii. This week, I investigate Dream Fossil, which collects all of Kon’s published short stories into a single volume. 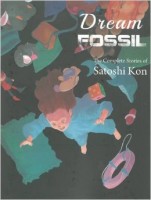 Dream Fossil is a window into a crucial stage in Satoshi Kon’s development: the six-year period between the publication of his first short story (1984) and his first long-form manga (1990). Readers may be astonished by Kon’s undisguised homage to Katsuhiro Otomo, and the flaws in his storytelling technique. Yet Dream Fossil is not simply a collection of juvenilia; these stories represent Kon’s first meaningful attempt to grapple with the themes that define his mature work, from Perfect Blue and Tokyo Godfathers to Paranoia Agent and Paprika.

Consider “Carve” and “Toriko,” two of Kon’s earliest works. Both take place in dystopian societies that stress conformity and obedience over individualism and free will–an ideal set-up for exploring the boundaries between reality and illusion. Though Kon delineates these boundaries more baldly in “Carve” and “Toriko” than in his later films, all of Kon’s characters exist in a false state of consciousness; only shattering acts of violence force them to question what they think is real. These early stories also suggest Otomo’s strong influence on Kon; “Carve,” in particular, feels like a compressed retelling of Akira, as both feature a young male protagonist whose extrasensory powers turn him into God-like being.

“Beyond the Sun” and “Joyful Bell” are another instructive pairing. Both stories evoke the humanist spirit of Tokyo Godfathers in their fond, funny depictions of two city-dwellers who temporarily escape the confines of their daily routines. As in Tokyo Godfathers, the urban landscape proves an essential component of both stories; Kon treats the city as a playground where adults can shed the burdens of age, failure, and loneliness to recover their optimism and youthful wonder.

Other stories work well on their own terms. “Guests,” a cautionary tale about real estate, skillfully blends humor and horror, while “Picnic,” one of Dream Fossil‘s briefest selections, depicts the sepulchral beauty of an underwater city. At the other end of the spectrum are Kon’s coming-of-age stories “Horseplay,” “Summer of Anxiety,” and “Day Has Dawned,” all of which suffer from tonal schizophrenia, see-sawing between wacky hijinks and meaningful lessons about adulthood. This combination might have worked in a longer format, but Kon’s characters are so underdeveloped that they never register as distinct individuals who are motivated by their own beliefs, fears, and desires.

If pressed to say whether I “liked” Dream Fossil, I’d be reluctant to give a simple yes-or-no answer. It’s difficult to overlook the rubbery faces and clumsy internal transitions in the volume’s weakest stories, or Kon’s flagrant efforts to cop Otomo’s style. Yet many of the stories feature the kind of arresting sequences, amusing plot twists, and flashes of genuine imagination that are hallmarks of Kon’s best films, making it difficult to dismiss this uneven body of work as “good,” “bad,” or “okay.”