Dr. Stone Volumes 5 and 6 by Riichiro Inagaki and Boichi

Dr. Stone’s science-infused shonen post-apocalyptic story continues to be amusing. The fifth volume works through the shonen staple of a tournament fight in order to decide the chieftain of the small village that Senku intends to use to build his Kingdom of Science. There are opportunities to expound on the benefits of optics in battle, both for improving eyesight and setting things on fire. The tournament doesn’t last overly long though, and Senku turns his attention back to manufacturing basic antibiotics in order to save the life of Kohaku’s sister. 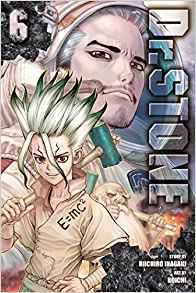 I was glad to see this series take more of a detour into the backstory of the event where everyone turned into stone, with an appearance by Senku’s father who was an astronaut. The decisions he made up in space during the event ended up ensuring that Senku would find allies once he woke up. The contrast between a crew of castaway astronauts living in Senku’s past and building the idea of oral traditions with Senku’s contemporary science-based approach was interesting. The looming possibility of conflict between Senku’s Kingdom of Science and Tsukasa’s growing empire continues, as a raiding party attacks and Senku’s allies narrowly escape. Boichi’s art is always dynamic, but I particularly enjoyed the scenes in this volume where a poisonous wind is portrayed as a terrifying giant looming over the landscape. Occasionally seeing the characters portrayed as tiny against the immense backdrop of nature just brings to home how difficult it is to cobble together a society with only a few resources.

I’m still getting more impatient for another appearance by Taiju, but I’m hoping as Senku and Tsubasa race towards an epic confrontation he shows up again. This is still a fun series because I never know what type of invention will be featured next, and Senku’s cerebral enthusiasm makes him an entertaining shonen protagonist for anyone wanting a slightly different slant on fight scenes.

Dr. Stone Volumes 3 and 4 by Riicharo Inagaki and Boichi

Dr. Stone’s premise of a post apocalyptic world where the heroes have to invent their way back to human civilization while battling factions of Luddites is much more of a higher concept than one tends to get in shone series, and so far I’ve been enjoying seeing how Senku attempts to invent his way out of sticky situations. In volume 3, the cast of characters for Dr. Stone expands as Senku stumbles across a small village of people who are to him, the missing manpower ingredient need to power even more ambitious science experiments. 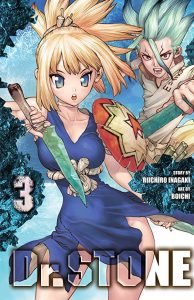 He meets Kohaku, the daughter of the village chief who promptly becomes an ally when she realizes that the power of science might save her sister and tribe shamaness Ruri from a terminal illness. Chrome is another villager who is a self-styled sorcerer due to knowledge gained from his own scientific experiments and rudimentary mineral and chemical gathering. With allies in place, Senku decides to build a new “Kingdom of Science” and power his inventions even further out of the stone age, in an attempt to get in a better place to deal with threat posed by the anti-science Tsukasa. The villagers are naturally extremely suspicious of the newcomer, but Senku has a unique solution in the form of food science. He decides to reinvent ramen in order to woo people to his side.

The village brings with it extra drama, as Senku races through inventing electricity, iron, and glass in order to have a functional chemistry lab to produce medicine, Kokaku has to worry about the battle for Riri’s hand in marriage that will determine the next village chief. Her friends prepare to fight to save Riri from the thuggish Magma. Even Senku’s ability to synthesize energy drinks might not be much of a help in a bracket-style fighting tournament that will decide Riri’s future. These two volumes were plenty diverting with the struggles of recreating inventions full of dynamic adventures, but I can’t help but wonder what on earth Taiju is up to! Hopefully in the next few volumes Senku’s expanded science team will come together again.

The second volume of Dr. Stone featured fewer scenes of crazy science action, but it did spend a more time on world building and setting up the conflict between the friends Senku and Taiju and newly revived but reactionary classmate Tsukasa. Senku is determined to push technology forward by manufacturing gunpowder, in order to give his group an advantage. The gunpowder sets off a plume of smoke which is answered by another smoke signal, indicating that the teenagers might not be alone in their post-apocalyptic world where everyone has been turned into stone. 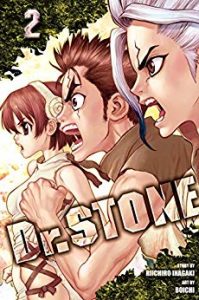 There was a flashback chapter showing Senku, Taiju, and Yuzuriha when they were young and pursuing Senku’s childhood dreams of rocketry. It was nice to see a glimpse of this mini friend group as little kids, and it played in well to how they work together to survive a hostile environment. Taiju and Yuzuriha have to figure out how to rescue their mad scientist friend, and we also get a glimpse of what Senku went through on his own, when he was the only human to wake up. There’s still plenty of dynamic science action in Boichi’s art, and while the second volume was a little less entertaining for me than the first simply because I was no longer as diverted by the initial premise of the manga, I’m curious to see how the conflict between Senku and Tsukasa is going to play out over the long term.

Female characters who exist mainly to be decorative and supportive is one of my shonen pet peeves, and at the end of this volume Dr. Stone seems to be heading in that direction. I’m not sure if all the genuinely enjoyable yelling about paleolithic science will be enough to offset those sort of plot developments, but I’ve liked the series so far.

Dr. Stone is a shonen series that is entertaining due to the combination of post-apocalyptic setting and mad scientist hero. The first chapter opens with overly enthusiastic high schooler Taiju vowing to confess his love to the girl he’s had a crush on for the past five years. His cynical scientist friend Senku wishes him well in a backhanded fashion. Just as Taiju is about to launch into his confession a mysterious light appears in the sky and all the people in the world get turned into stone, frozen in place for several thousand years.

When Taiju wakes up again, he comes to in an overgrown area littered with stone fragments of people. He wanders around and sees one of his most powerful classmates, Tsukasa, also frozen in place. Senku pops up and tells Taiju that he overslept terribly, because he’s been awake and on his own for the past year and a half. Senku is determined to restart civilization, but he needs additional help, and Taiju is going to serve as the muscle in his scientific endeavors. Senku has a habit of making grand pronouncements about the rate of his ability to reconstruct stone-age scientific discoveries by yelling “Get Excited!”

There’s certainly a lot of yelling, naked men wearing leaves, and hazardous attacks from both animals and other survivors in Dr. Stone, but I enjoyed the emphasis on adventures driven by ancient science. The dynamic between the two protagonists, with one of them being super smart and the one mainly having enthusiasm on his side also set up plenty of amusing side scenes in between all the fighting and scrabbling for survival. I tend to not always be that enthusiastic about non-sports shonen manga, but I was definitely intrigued by the first volume of this series. 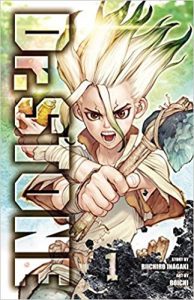