I’ve read a handful of charming memoirs lately, and more are on the way! 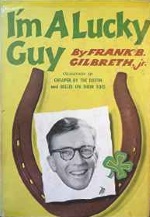 I’m a Lucky Guy by Frank B. Gilbreth, Jr.
This was a reader suggestion from Anne!

Here, Frank B. Gilbreth, Jr. (writing without sister Ernestine, his sometime collaborator) recounts various happenings and misadventures from his early adulthood, beginning in 1929 when he’s headed off to college and ending somewhere around 1946, when he has returned from serving in the Navy and resumed his career as a newspaperman. These include things like going out for football whilst scrawny, being mistaken for a gun-toting gangster whilst attempting to hide booze (prohibition was still on) from the cops, pranking an odious professor (and, later, an odious superior officer), and repeatedly failing to live up to the standards of a demanding admiral to whom he has been assigned as aide.

On the whole, I found all of these stories entertaining, though the sole moment that made me laugh out loud was when Frank’s soon-to-be wife and mother-in-law completely excused the lascivious behavior of his friend, which a moment before had scandalized them, upon learning he was Methodist (their preferred denomination).

“You don’t think he’s a Ten Commandment breaker?” I asked.
“Why, I’d trust him any place,” Liz said indignantly.
“So would I,” said her mother. “I’ve always said that people shouldn’t be judged by circumstantial evidence.”
“You’re so right,” I assured her.
“Probably,” she continued, fishing around for a likely excuse, “probably—well, probably the doctor sent that girl over to your apartment to change the boy’s bandage, again, before he went to bed.”
I was tempted to break into a high-pitched giggle, but I looked at Liz and caught a warning.
“That’s probably just the way it happened,” I nodded gravely.

Unfortunately, it does seem Frank shares a little of the antipathy toward overweight people that his sister possesses. I don’t mind when he accurately describes a person’s physical characteristics—if a bosom is ample and an abdomen abundant, there’s really no getting around that—but when he makes comments about fellow student Sallye—whom he later proclaims to be “a real friend”—like no “male student in his right mind” would give her their fraternity pen, it’s just unnecessarily mean. True, Sallye has a tendency to be loud and overbearing, and I’m fairly sure that’s part of what he meant, but not the whole of it.

That criticism aside, I did enjoy this book and I’m glad I read it. Thanks, Anne! 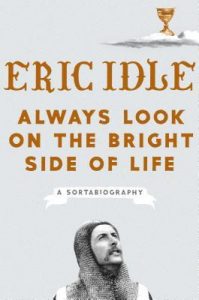 Always Look on the Bright Side of Life: A Sortabiography by Eric Idle
Initially, although it was an enjoyable read, I wouldn’t have classified this “sortabiography” from the Monty Python co-founder as charming. Idle recounts his childhood, school days, introduction to the world of comedy, the formation of Monty Python, the run of the original series, and the Python movies without a tremendous amount of detail. He does elaborate more about his independent endeavors, and I especially appreciated learning more about the creation of The Rutles. Using the song “Always Look on the Bright Side of Life” as a sort of framework, Idle chronicles the various circumstances after The Life of Brian where he was called upon to sing it, ranging from Graham Chapman’s funeral to the Royal Variety Performance to the closing ceremony of the 2012 Summer Olympics.

As is common for a book of this type, there is a lot of name-dropping, but in this case a lot of the names were people I genuinely like, like Harry Nilsson, George Harrison, David Bowie, Stephen Fry, Peter Cook, Robin Williams, and Eddie Izzard. And, too, Idle toots his own horn rather frequently, which is admittedly justified when you’ve accomplished as much as he has, and makes sure readers know there were times in his life when he was having loads of sex.

Where he really shines, though, is penning touching tributes to friends who are no longer with us. My husband and I listened to Idle read the unabridged audiobook version together, and by the end of the chapter entitled “George,” we were both in tears. The chapter about Robin Williams is no less lovely. I cannot stress enough how wonderful these two chapters are; they alone are worth the price of admission. It does make one wonder why he doesn’t delve so deeply into the character of his comedy partners, and only makes a few mentions of Terry Jones’ dementia, but perhaps it is because they were all still living in 2018, when the book was published. I shall have to find out whether Idle penned any tributes to Jones on the sad occasion of his passing last year. 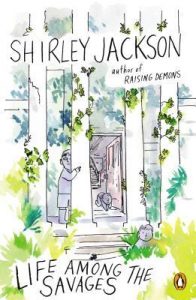 Life Among the Savages and Raising Demons by Shirley Jackson
I’d heard such good things about these books, but my reaction to Life Among the Savages wasn’t what I expected. True, some of the “lightly fictionalized” anecdotes Jackson relates are somewhat amusing, like the family’s struggle to find a house to rent in Vermont, or insisting to the hospital intake person that her occupation is “writer” as opposed to “housewife,” or her son’s fascination with all the gory details after he gets hit by a car. But the vast majority of the stories involve her children behaving badly, and I had very little patience with these at all.

I imagine that other mothers sympathize with these episodes. Perhaps they see their own experience reflected, and so they laugh but also feel all warm inside, in a loving, maternal way. Not so me, I’m afraid. No, whenever the son showed arrogant condescension toward his mother, or her daughter became intolerably fixated on proper decorum, or one kid or the other was insolent and disrespectful, it just made me angry. In fact, I might have said “Shut the fuck up!” aloud a time or two. This is why it is probably a very good thing that I am not a parent.

Thankfully, Raising Demons contains less of that sort of thing (though significantly more than none). I really loved the section in which Jackson waxes nostalgic about her adolescent obsession with making clothespin dolls and her snarky description of life as a faculty wife (who is expected to have “hemming dishtowels” among her hobbies). The story of how she got a new refrigerator was a highlight, as well. 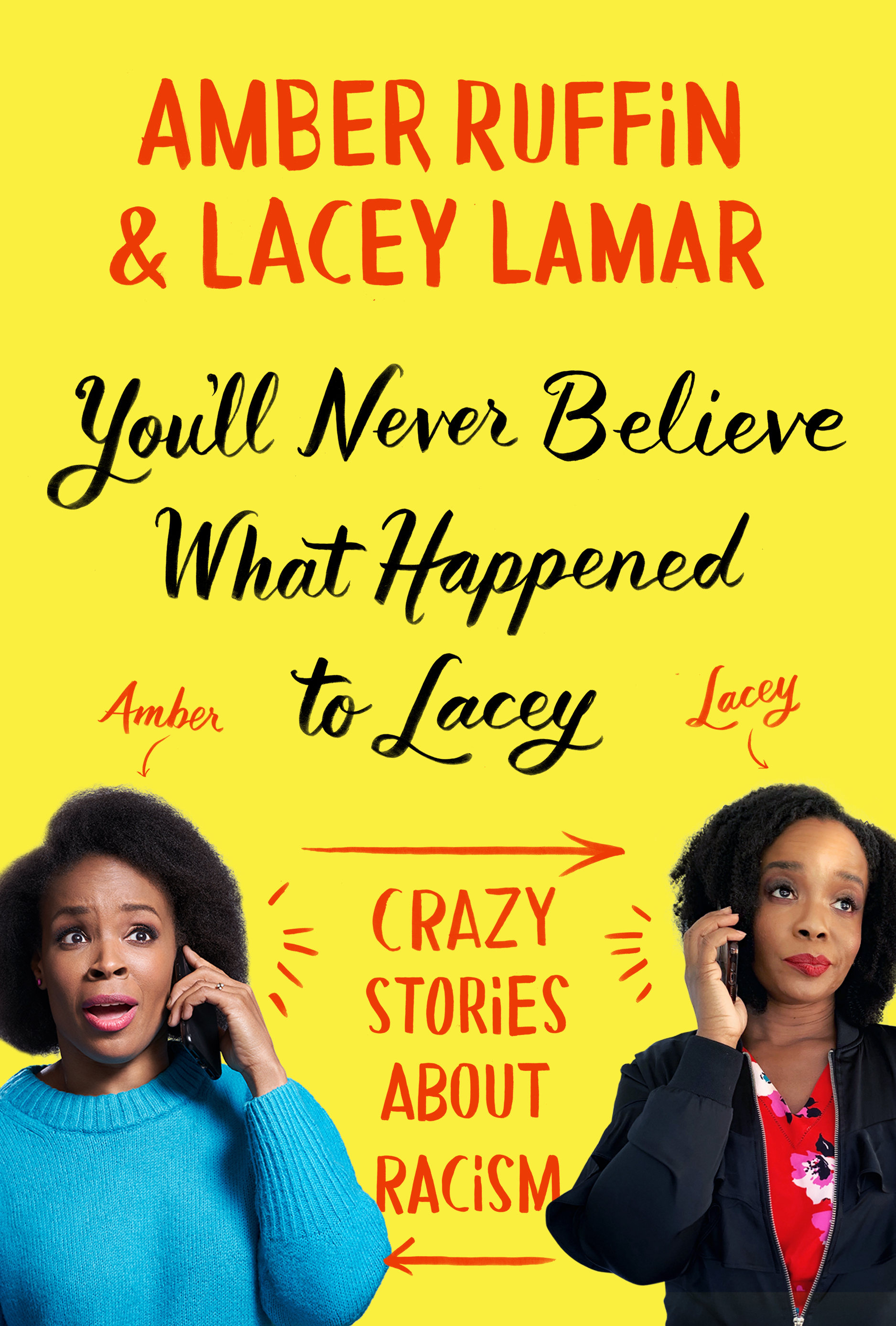 You’ll Never Believe What Happened to Lacey: Crazy Stories About Racism by Amber Ruffin & Lacey Lamar
Having seen and adored whimsical clips from The Amber Ruffin Show, I was very excited to see that Amber Ruffin and her older sister Lacey Lamar had written a book together. Although the topic is racist incidents the sisters have endured (mostly Lacey, who lives and works in Omaha), the approach at least attempts to be light-hearted. These aren’t stories where someone gets hurt or dies; instead, they elucidate the kind of crap Black people are just expected to swallow or forget.

I did laugh a few times, particularly at Ruffin’s effervescent line delivery—I listened to the unabridged audiobook read by the authors—but after a while, the unrelenting wave of absolutely flagrant ignorance and hate becomes overwhelming. The commentary on the stories is funny, but the situations themselves are stressful and horrible and eye-opening in the most abject, despair-inducing kind of way. I have never been one to deny that racism exists, but I admit to being surprised and horrified by a lot of these stories, espcially the awful things done to kids. A beautiful drawing torn to shreds, a group of teens accused of stealing car keys when none of them is old enough to drive, kids threatened at gunpoint by a crazy neighbor but nobody calls the cops because who will the cops believe… I also feel terribly naive for being surprised.

I’m glad I read this. 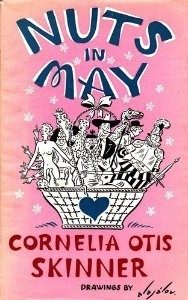 Our Hearts Were Young and Gay and Nuts in May by Cornelia Otis Skinner
Note: The former was co-written with Emily Kimbrough.

Our Hearts Were Young and Gay recounts the three months in the early 1920s that two young American women spend abroad in Europe, written when they are older (“Emily and I have now reached the time in life when not only do we lie about our ages, we forget what we’ve said they are.”) and nostalgic for more innocent days. It’s written in Cornelia’s voice, though Emily provides many of the details, and tells of the time their ship ran aground, the time Cornelia caught the measles and evaded quarantine, the time they met H. G. Wells and Emily made an embarrassing first impression, the time they mistook a brothel for a boarding house, the time bedbugs gave Cornelia a swollen lip “shining like a polished tomato,” the time their dogs piddled in a swanky Parisian restaurant, etc. For the most part, it’s quite amusing, but there are a few comments that expose the girls’ ignorant attitudes regarding people of other races and sexual preferences.

Rather than focusing on one particular adventure, Nuts in May is a collection of humorous yet unrelated anecdotes Skinner wrote for publications like The New Yorker. Topics include but are not limited to: actors being asked to lend their talents in aid of charitable organizations, a Protestant family’s audience with the Pope, people who laugh at anything, dizzying real estate transactions, and being interviewed by Dr. Kinsey. Occasionally, the tone turns more domestic and reminds me some of Shirley Jackson, such as in “Bag of Bones,” when Skinner’s son insists that the bones they find on a Colorado trail belong to a dinosaur, or “Those Friends of His,” about her son’s reticence on the origins of his friends who come to visit. The latter also makes reference to a car “teeming with hamsters,” which is a phrase and a visual that I adore. Indeed, there were quite a few giggles to be had, and I reckon I might seek out more of Skinner’s work in the future.