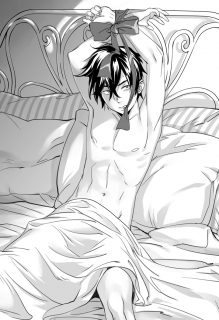 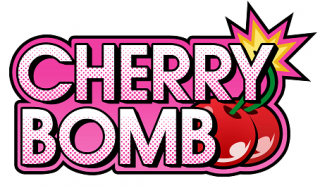 Back in April 2014, Chromatic Press announced Cherry Bomb, its new imprint for mature readers. The intent was to provide an outlet for Sparkler Monthly‘s creators to explore a sexier side of their already established characters and stories with a goal to include original, unrelated material in the future as well. Cherry Bomb’s coordinator Lianne Sentar probably sums it up best: “We want our erotica to be emotionally cathartic, with a purpose and meaning behind some smoking content. If it’s all smut and no context, that’s not good enough – we demand both!”

Personally, I was very excited to learn about Cherry Bomb. The imprint launched with five titles: two short stories from Tokyo Demons, which I had previously read and enjoyed (I’ve written a little about my Tokyo Demons obsession in the past); two short comics from Awake; a Gauntlet side story; and Cinderseed, the prologue to the then upcoming illustrated novel Skyglass written by Jenn Grunigen with art by Mookie.

I’m rather ashamed to admit that after the initial Cherry Bomb announcement, I actually completely forgot about Cinderseed. But then came the even more recent announcement for Skyglass, which made its debut in June 2014 in Sparkler Monthly, Issue 11. The prose series was described as “throwing Ai Yazawa’s Nana, a space opera, and a really fresh take on post-apocalyptic Earth into a blender.” With a line like that, I knew that I needed to read Skyglass. It was at that point that I was also gently reminded that Cinderseed existed, and the lovely folk at Chromatic were kind enough to send along a review copy to me. 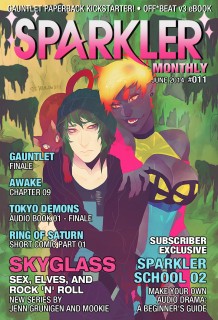 Cinderseed opens with a girl floating through space, a fire elemental who has been ripped from the sun, her home, and confined within a human body. Understandably, she is somewhat confused and not particularly pleased by this turn of events and violently lashes out at the humans who would try to control her further. Soon after she meets Kri, who hopes that she would kill him, too. But as a Pleasure Intelligence, he doesn’t have much say in the direction his life is taking or even ownership over himself.

The two of them make an interesting contrast, similar to each other in some ways but vastly different in others. Neither are entirely human, but Kri has been designed by humans and his thoughts and behaviors are influenced by that. On the other hand, Phoenix’s actions and ways of thinking are often disconcertingly inhuman. (As they should be.) However, they both feel trapped, experience loneliness, and want to reclaim themselves and take control of their own lives. Phoenix, though, is much more likely to redirect her feelings towards revenge than Kri is.

Technically, while reading the prologue may not be absolutely necessary to follow what is going on in the novel proper, it does provide background information and additional insights into the world and characters of Skyglass, particularly the re/birth of Phoenix. Plus, it’s sexy. And hot, often literally so. (Phoenix is a fire elemental, after all.) Female-friendly, queer-friendly, and kink-friendly, too. The science fiction setting provides the opportunity for some particularly creative, audacious, and delightful, scenarios. And keeping with the intent of Cherry Bomb, the sex serves a purpose beyond titillation in Cinderseed; it’s integral both to who the characters are as people and to the plot itself.

One of the taglines for Skyglass is “Sex, elves, and rock ‘n’ roll.” The prologue covered the sex, but the elves (I promise, it makes perfect sense within the context of the story) and rock music don’t come into play until the first chapter with the introduction of the novel’s other main character Moss Wick—a half-human/half-elvish drummer who has…significant issues. And on top of those, Phoenix has attached herself to him. Unlike the prologue, which was written in the third person, the main narrative (or at least the initial chapter) alternates between Moss and Phoenix’s perspectives and is told in the first person, allowing the readers to get a very good sense of who they are. If Kri and Phoenix were opposites, Moss and Phoenix are even more so; their relationship should be quite interesting to watch unfold.

Even after only having read the prologue and the first chapter, I’m already loving Skyglass. The wait for the release of each new chapter will be torturous, but I’m definitely looking forward to reading more. The novel is shaping up to be smart and sexy and incredibly offbeat science fiction, with interesting and entertaining characters, a fascinating setting, and an engaging writing style. Personally, I think Cinderseed and Skyglass, not to mention the rest of the offerings from Chromatic Press, are well worth checking out.