Blue Flag continues to be an incredibly nuanced and introspective look at teenage life with an unconventional love quadrangle that shows characters intersecting in different ways, producing moments of self-reflection. As the volume opens Taichi has redeemed himself from a trauma in his childhood by saving a kitten from being struck by a car – only for his old friend Toma to break his leg saving Taichi. Toma’s stuck in the hospital and unable to lead his high school team to victory in the baseball championships but one of the biggest conflicts in this volume isn’t due to physical pain as Taichi’s crippling insecurity causes him to lash out at the people around him. Having an event that he genuinely feels guilty about causes him to feel even worse about himself. 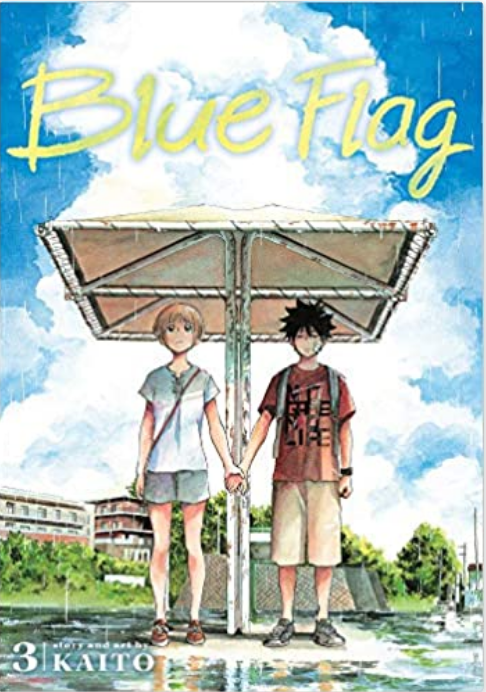 Toma betrays his own feelings when Taichi comes to apologize, saying that Taichi’s life is more important than baseball and then attempts to cover it up by saying that Taichi is his best friend. Taichi is so used to comparing himself to Toma unfavorably that he’s not even able to really process this information, and it seems like his insecurity is preventing him from acknowledging the genuine friendship that Toma is offering. Taichi even lashes out at Futuba when she attempts to comfort him, pointing out that he’s only a means to an end for her crush on Toma. Masumi steps in to help Futuba process her feelings for both Taichi and Toma, but I hope in future volumes she gets a little more of the spotlight herself, instead of being a default teenage relationship counselor for the other kids.

Throughout this volume KAITO’s art portrays teenage drama and introspective moments with the same amount of facility and care. While there are plenty of dramatic incidents in each volume as the protagonists start trying to figure out who they are and what they want in terms of romantic relationships, it is clear to see that they are moving forward. While Taichi’s self-loathing is still ensnaring him he’s still moving forward in terms of having more of a genuine connection with other people than he’s had before. I’m hoping that these friendships help him feel better about himself and his place in the world as the series develops.

This second volume continues to be strong entry in slice of life high school stories, as everybody gears up for an unexpected performance at a school sports day. They’re doing all the typical things teenagers do in spring, hanging out, getting gelato, and discussing everyone’s love life. Apparently Masumi is dealing with a string of short-lived boyfriends, which Toma finds quite startling. Toma gets peer-pressured into being cheer team captain in addition to being anchor on the relay team, and he agrees on the condition that Taichi and Futuba be on the cheer team too as vice-captains. Taichi is characteristically reluctant, but agrees to go along with Toma’s plan. Toma’s charm is key in winning his friends over. Taichi and Futuba diligently practice together while Toma is busy. 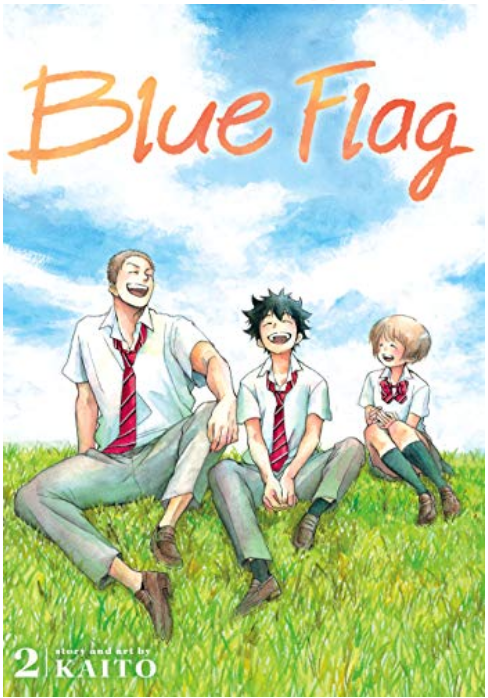 Taichi finds out from Futuba that Toma isn’t planning on going to college, and he’s startled because when he and Toma were childhood friends, this was the type of thing that they’d talk about. Friendships shift and develop in new ways, even though Taichi still has feelings for Futuba. There’s a general air of wistfulness throughout this volume as Taichi wonders what’s going to happen as his friends transition away from high school. KAITO’s illustrations set Toma apart from everyone around him, and while this emphasis on his hulking size shows how athletic he is, it also serves as a way of visually distancing him from everyone else. Taichi and Masami also get some one-on-one time, where he shows he’s not very capable at picking up what she’s talking about when she asks him what it is like to experience being attracted to the opposite sex. Taichi’s pondering about Toma’s future also cause him to question his own aimless nature.

It is a pleasure to see this new friend group come together in Blue Flag. While there is certainly drama to be had, it is also somewhat uncomplicated so far which makes it a relaxing read. This volume ends on a big cliffhanger though, so I expect much more drama ahead.

It is fair to say that I read plenty of manga, but now and then I read a series that is just so well executed that it feels incredibly refreshing. I knew Blue Flag had plenty of fans, and I was excited to read it when I heard that it was licensed, but my high expectations were surpassed by the first volume.

The volume opens with some character introductions that remind most readers of standard characters, but the insightful look into Taichi’s inner thoughts as he starts a new school year plays against readers expecting something more stereotypical. Taichi has a small friend group, who all look like they came out of a shonen playbook of nerd 101. He’s fairly content with remaining under the radar at school, but something quickly breaks him out of his usual routine. Taichi’s elementary school friend Toma is going to be in Taichi’s class for the first time in several years. Taichi and Toma are opposites in many ways. Taichi is short and has hair that seems to defy any grooming attempt. Toma is tall, athletic, and extremely popular, but his effortless way of making friends is the result of him being genuinely nice rather than anything overly calculated. Taichi’s friends consider Toma to be a different species than them, and are mystified that Toma keeps popping up to keep randomly talk to Taichi even though Taichi claims that they aren’t close anymore. 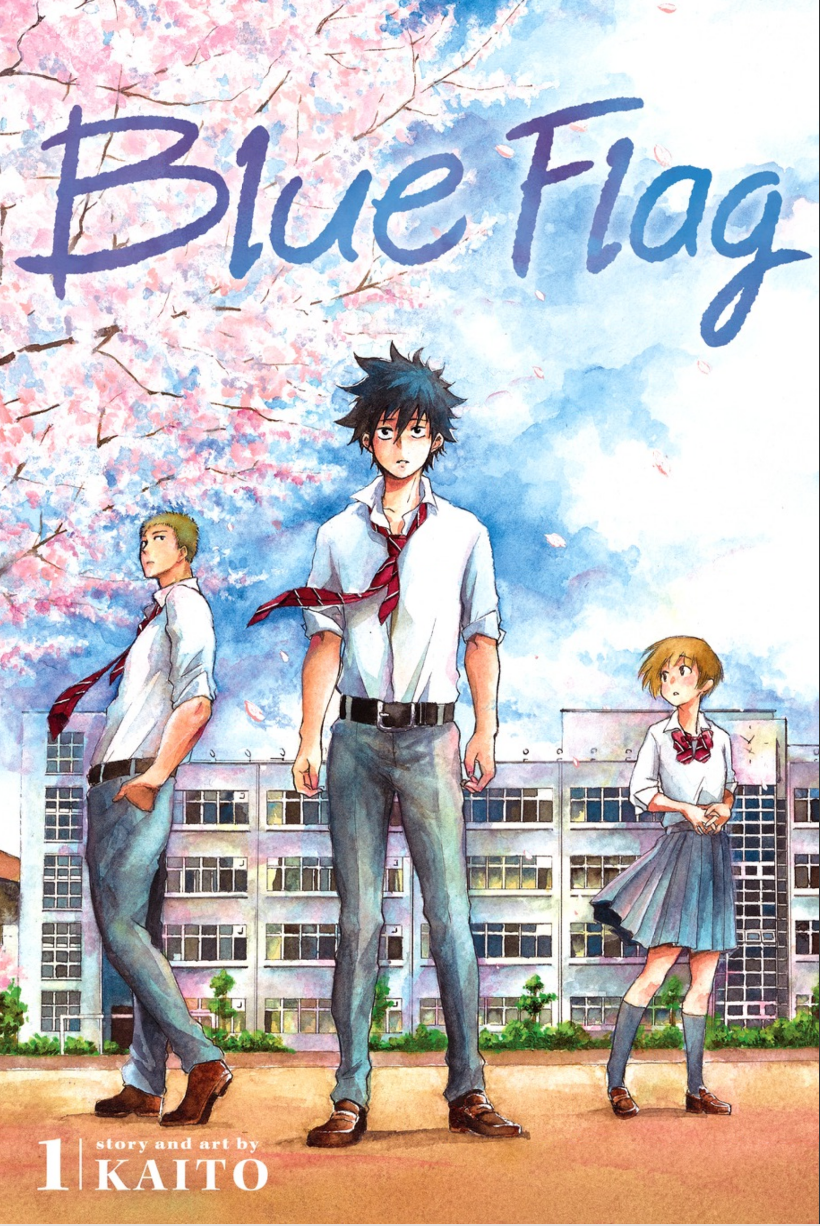 Taichi seems to have a special kind of antipathy to Futuba Kuze, a girl in his class who is painfully shy and clumsy. He starts to realize that he’s reminded of his own failings when he looks at her, because she’s similar to him. After an incredibly awkward chance encounter in the library, Futuba asks Taichi for advice because she has a crush on Toma. He thinks that any help he would provide would be useless, but she’s incredibly determined, following up with any random reference that Taichi tosses out. Eventually Taichi agrees to serve as Futuba’s spectacularly uninformed tutor in the ways of teen romance. Taichi is brutally realistic with Futuba about her chances of attracting Toma, but she’s not fazed by the idea that she isn’t his type. Eventually Taichi and Futuba strike up an odd friendship as he keeps trying to draw her in to his usual interactions with Toma. Blue Flag is invested with a ton of emotional resonance as the characters investigate childhood games, deal with homework, and share memories. Futuba explains to Taichi that one of the reasons she’s been nursing a crush towards Toma is that when he accidentally knocked down her plant in the school garden with a stray baseball, he returned every day until it was healthy again.

Towards the end of the volume, the reader gets a sense of what is actually happening in Toma’s head and the realization that the love story that’s unfolding is going to be much more complex and surprising than one would think. Blue Flag rewards the re-reader, who will be able to go back and detect hints in the body language and attitudes of the characters. This is by far one of the most promising shonen series I’ve read in a long time, and the focus on the emotional complexity of teenage live reminded me a bit of Cross Game. I highly recommend Blue Flag, and I’m impatiently waiting for the next volume.