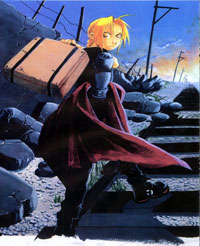 Hello readers! I’m going to be moving over the next week, which means updates here may be sporadic until we’re finally all in place (and with working internet service). One point of interest: I hadn’t quite realized just how large my manga collection had grown until I packed it all up this morning. Also, wow were those boxes heavy!

On deck we have the upcoming edition of Manhwa Monday as well as reviews of Ode to Kirihito, One Fine Day, Vol. 2, Hikaru no Go, Vol. 19 and as much more as I can manage in between all the hauling.

In the meantime, check out my blogroll for links to all of my favorite blogs.

Please excuse this off-topic post but I must take a moment to talk about Dorrie, my beloved friend and companion for the past eighteen years. Today we lost her and though my heart is truly broken, I’d like to share with you all some of what made her so special.

I first met Dorrie when I was working as a waitress at a Mexican restaurant in New York’s financial district. Another waitress was looking for a home for a six month old kitten belonging to her little sister. The girl had stopped caring for the kitten and her mom was sick of dealing with it herself, so she planned to have the kitten put to sleep. Though I already had four cats and was not looking for another, I immediately said, “Bring me the cat!” The next day, she brought me a half-grown kitten named “Princess” in a cardboard box. I re-named her “Dorrie” (though she was occasionally referred to as “The Cat Formerly Known As Princess”), hopped on the subway, and brought her back to my apartment. Dorrie was named for a character in one of my favorite books, B.J. Chute’s Greenwillow. Greenwillow‘s Dorrie was a foundling, taken in and loved by two sisters who raised her as their own. I considered my Dorrie to be much the same.

Though Dorrie had clearly been abused in her former life and it took a lot of love and patience to get her through the trauma that had instilled in her, over the years she developed into the most friendly, loving, unique cat I have ever known. There has never been another like her.

According to legend (and by “legend” I mean “my husband”), Dorrie has been many things over the years, including (but not limited to) a film star, a pitcher for the Red Sox, leader of a nation, a licensed driver, reliable transportation (later upgraded), a presidential candidate, an express delivery service (man, I wish the Dorrie Express website was still up), a donkey, a hardened criminal, burger ingredients, meat pie, a superhero, an artist’s model (that’s actually real–thanks Ellen!), valid currency, an avid writer, omniscient, possibly evil, occasionally flabby, and… okay, I don’t actually remember what this was about, capable of mind-reading, speaking English, teleportation, writing fanfiction, and pretty much anything else you can imagine. She also kept my husband warm. She definitely loved the telephone and the Kitty Kat Komb, was creative about her seating choices, and occasionally felt hurt.

Most of all, though, she was our most dear, beloved cat. I will miss her more than I can possibly express, though I feel very lucky that she allowed me to share my life with her for eighteen wonderful years. 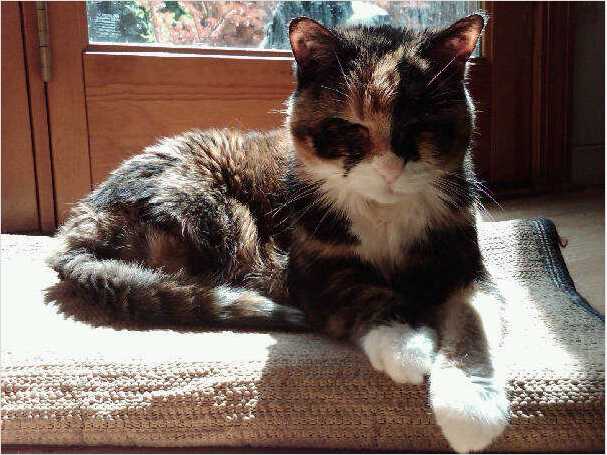 First of all, my review of Sayonara, Zetsubuo-Sensei, Vol. 1 is finally done and posted at Manga Recon. I really enjoyed this book, and though I haven’t read any other full reviews of it yet, I get the feeling most people will either be pretty delighted with it or be completely baffled that anyone could be. Its humor just happens to hit my funny bone just so, which is a pretty great thing!

Secondly, I’ve been waiting until I was finished with the review to talk about my anniversary, so it is finally time! Besides a lovely dinner and so on and so forth, the main feature of the day was that we both got Blackberry Storms! Yes, we spent our wedding anniversary geeking out over new phones, do you have a problem with that? We geeked out at home, we geeked out at the restaurant. All in all, the “Geekiversary” (as we named it early on) was pretty fantastic, and now that I’m finally done with that review, I am finally allowed to really play around with my new toy! I’ll begin with two photos I took this morning of my office. The camera on the Blackberry blows away the one on my old phone (though my skills are sadly the same). …

END_OF_DOCUMENT_TOKEN_TO_BE_REPLACED

Just a few loose ends on this lunch hour. Today is my eighth wedding anniversary, so I probably will not be online much this evening, but there are a couple of things lurking in my head which I will try to type out now.

Random: I finished Sayonara, Zetsubou-Sensei last evening in preparation for writing a review this week for Manga Recon, and it is one of those comics that makes me really, really wish I could read Japanese. Also, I’m really looking forward to completing my review so that I can finally read everyone else’s.

Also, someone’s comment early this morning got me thinking more about the discussion of online identity, specifically what I value most when I’m assessing someone’s credibility online. I replied in comments with my thoughts, but I’ll share them here as well. …

END_OF_DOCUMENT_TOKEN_TO_BE_REPLACED Thank you all for letting me into your world.

Today started out in a bit of a whirlwind, as I got up early to get into work by 7:00 AM, so that I could finish up all my pre-vacation business before getting hit by the 6-12 inches of snow coming our way. I then raced home to beat the storm, and now here I am, hatches battened, watching the snow come down. *whew*

We have a new roundtable discussion posted over at Manga Recon, where we discuss the canceled/indefinitely postponed series we would most love to see rescued! My personal choices were Yotsuba&! and the Kino no Tabi light novels, but there are a lot of amazing titles mentioned.

Other than that, I expect I’ll be shoveling snow for the rest of my life, but my vacation has started, and I’m feeling quite giddy! Happy Holidays, everyone!

There is a light coating of snow on the ground this morning–the first real snow of the season here in Western Massachusetts, and the timing could not be more perfect. I spent the early part of the morning decorating the Christmas tree we brought home yesterday, and now I am curled up cozily on the couch with my doggie, gazing at lights and snow. The smell of a Christmas tree always takes me back to my childhood and teenaged Christmases, surrounded by beautiful music, good food, and the noisy cheerfulness of the many friends that filled my parents’ house all year ’round, but especially during the holidays. My holidays are a lot quieter now, but that has its nice points too. A morning like this is definitely one of them.

I’ve been absent from this blog for the past few days, and though some of that can be attributed to the time of year, there are also some manga-related things afoot which I can’t talk about quite yet. Look for news here at some point tomorrow!

I may have tree photos to share later on, if I can convince my husband to take some. Meanwhile, I will continue to enjoy my quietly festive morning. I hope you are all happy and warm. :)

Edited to add: As promised, tree! …

END_OF_DOCUMENT_TOKEN_TO_BE_REPLACED

I finally have a day off after the insanity of the past week. I’ll write about manga later (no, really), and I’ll be catching up on everyone else’s blogs too. But for the moment, I offer this.

It’s an old video, I know, and everyone saw it months ago. But I watched it again this morning, and ended up with tears pouring down my face.

I thought about apologizing for making such a blatantly partisan statement here, but then I remembered two things: 1) Hey wait, this is my blog! 2) It’s not actually a partisan statement. My support of Barack Obama has very little to do with party politics. I support him because I believe he has the intellect, the vision, the compassion, and the fortitude to be a truly great leader, and that he is the greatest hope we have for healing this broken nation. …

END_OF_DOCUMENT_TOKEN_TO_BE_REPLACED

This morning, I read a post by a good friend of mine, sistermagpie, over at LiveJournal, in which she talked about some conversations she’d seen recently revolving around whether academic analysis could ruin a person’s enjoyment of fiction. The crux of her post was that she couldn’t imagine that analyzing a story could ruin her love of reading, and when I first read her argument, I was in complete agreement. Wouldn’t analysis simply deepen my love for something, by helping me to fully understand and appreciate the depth of the material? Then I remembered my state of mind when I left the commercial theater business, and my brain said, “Oooooooh, that’s right.”