I was surveying my stacks of manga and decided that I needed to make more of an effort to get into the Halloween spirit. I figured that Black Torch was an ideal candidate since it features supernatural beings and a black cat, who is also a supernatural being. Spooky!

Jiro is the plucky protagonist of this manga, who has some unique abilities. He has the ability to talk to animals and is descended from a long line of ninjas. He also has absolutely no tolerance for animal cruelty, as the opening scene in the manga shows him driving of a gang that was bugging a stray cat and raven. Jiro’s Grandfather seems to mainly enjoy yelling at his grandson about ninja traditions. Jiro finds out about a cat in distress and goes to rescue it. He finds Rago, a demon (or mononoke) trapped in the form of a black cat. Jiro learns that Rago was caught up in a demonic struggle, and doesn’t remember all the details of his past. Jiro is determined to help Rago, even though the demon attempts to leave Jiro, he is relentless in his desire to help. This is one of the more endearing aspects of Black Torch, even though Jiro ends up getting trapped in a deadly mononoke battle. Rago and Jiro end up being fused together, as Rago goes to help his reckless ninja friend. There are elements that are somewhat predictable in most shonen manga, like a supernatural protection agency and the hints that Rago and Jiro will soon join a team fighting evil. 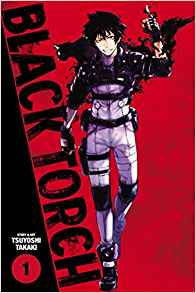 The art in Black Torch has a slightly scratchy quality that I enjoyed. Rago’s surprised cat faces were hilarious, and when his mystical powers manifest in the form of swirling black tendrils surrounding his cat form, the effect is suitably dramatic and mystical. The action scenes are dynamic. While Black Torch doesn’t stray far from the typical shonen manga formula, Jiro’s devotion to animals, the odd couple relationship between him and Rago, and Rago’s hilarious cat expressions go pretty far in making it an enjoyable supernatural action manga.