I feel like Anonymous Noise is hobbled by its covers, because they are so consistently great the manga inside has a hard time living up to them. That being said, I found the contrived plot elements a little less annoying in the second volume, probably because the cliched character introductions are now out of the way.

The volume opens with Nino being challenged about her vocal ability. Miou, Yuzu’s former singer points out that while Nino’s voice has a compelling quality, her technique is a mess. Nino and Miou sing together and Miou is able to sustain her note much longer than Nino. Nino is determined to get better, and she starts reading tons of books on vocal technique. Nino spots Momo’s name on a flyer advertising music autions for a famous writer/producer, and she decides to try out in order to find out if the mysterious producer is her long-lost Momo. Of course the auditions are on the same day as the next TV appearance of In No Hurry to Shout, and Nino has to somehow pull off being at both at the same time.

The aspect of this manga that I found most interesting in the first volume was Nino as a destructive muse. She’s so single-minded, she is still utterly unaware that she’s hurting Yuzu’s feelings with her never-ending Momo obsession. Yuzu is inspired to compose by the idea of Nino as his Alice, but Momo is determined to avoid her because he’s turned away from his original childhood inspiration to compose pop hits. Yuzu even damaged his voice to sing with Nino when they were children, with the result that he’s no longer able to sing himself and Nino is now serving as his proxy. All this obsession in the service of creativity might not be a good thing, yet the joyful scenes of people lost in song carry the manga along.

I wish some of the plot elements were a little less contrived, because the coincidences piling on top of each other take me out of enjoying the story a little bit. I am still enjoying the stylish art, particularly a great panel where Yuzu hands Nino the wig of the lead singer for his band. I think this series might be one where I become a little better at engaging my suspension of disbelief with each volume. Anonymous Noise certainly delivers dramatic angst, so I’m still finding it interesting to read. 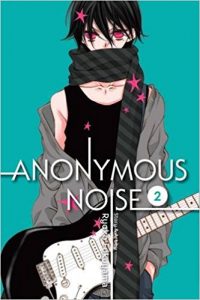