By Mingo Ito. Released in Japan as “Yuzu no Dobutsu Karte” by Kodansha, serialized in the magazine Nakayoshi. Released in North America by Kodansha Comics. Translated by Julie Goniwich.

The afterword of this manga volume revealed that it was actually a collaborative spinoff of a game (Bow Meow Animal Hospital: Let’s Become a Great Vet) that came out for the 3DS. This surprised me, because as I read it in fact I was feeling a different kin of nostalgia: I was reminded of the older shoujo manga of the 1990s. Shoujo has mostly skewed older as the years have gone by, and these days when you think of it you think of high school girls having to choose between the sullen black-haired guy and the sunny blond-haired guy. (She chooses the former.) But older shoujo actually did feel much of the time like it was writing for a target audience of 10-12 year old girls. Nakayoshi in particular felt that way. And so this retro manga about an 11-year-old girl dealing with her nervousness around animals while working at her uncle’s vet hospital is really wholesome and refreshing. 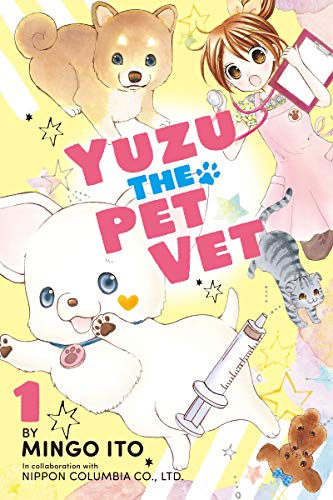 Yuzu has had a tough life as we begin this volume. Her dad passed away when she was five. Her mother is sick enough that she has to be hospitalized. And so Yuzu goes to stay with her uncle Akihito, who’s a veterinarian. The trouble is twofold: first, she’s scared of animals (and the hospital’s mascot, a chihuahua, doesn’t like her much). Second, he’s putting her to work as his assistant, which… is child labor, but that’s really not what the manga is about, so I’ll ignore it for now. There’s an underlying plot of Yuzu learning to get along better with animals, as well as with her peers, make new friends, and try to stay strong as her mom recovers. That said, the main draw is that each chapter has a dog or cat with a problem, and Yuzu is instrumental in finding the solution, as she’s very empathic.

The manga is not afraid to shy away from topics that are common around vets: the first chapter begins with a dog dying of old age (there’s even an (owner hugs the dying dog as they talk about them going to heaven) shot – this manga is not afraid to slam on the cliches when it wants to pull at the heartstrings). Most of it is telling pet owners to be more observant in how their pets are acting, to pick up on little signs that they may be in distress. This goes both ways – the reason that Yuzu is so quick to solve these “cases” (it reads a bit like a mystery at times) is that she can spot the owner’s emotional deficiencies – the owners also being kids her age. There’s chapters on not overworking your pets, on being able to move on from one pet to another after the first passes away, and (the strongest of the four chapters) on dealing with dogs who have dementia.

There’s not much story here – I expect Yuzu to bond more with the chihuahua, get less nervous overall, and be a ball of sunshine. It’s about the cute animals. Some of them may err on the side of ‘cute’ rather than ‘accurate’ (that Golden Retriever at the end made me laugh at how bad it is), but that’s fine. This feels like a manga for young girls about cute animals and overcoming fears. Recommended for all ages.