By Akamitsu Awamura and mmu. Released in Japan as “Ore no Onna Tomodachi ga Saikou ni Kawaii” by GA Bunko. Released in North America by J-Novel Club. Translated by airco.

There’s a narrowing of focus in this second volume. In the first book, we got to see a whole lot of Kai and Jun’s peers, classmates, and rivals and see how their “relationship” impacted all of them. For the most part, there’s very little of that in the second volume. Indeed, Reina, my favorite character from the last book, has a much smaller role here, though she certainly makes use of it, seeing what the rest of the cast don’t. But for the most part this volume deals only with three characters: Kai, Jun, and Kotobuki, the girl who confessed to him in the cliffhanger of the last book. I was honestly worried about the addition of Kotobuki after that last book, fearing this would become a “one girl per book” sort of harem series. Fortunately, my worries were unfounded – I’d argue this book is better than the last one, getting into the nitty gritty of friends vs. girlfriends and coming out on the friends side. 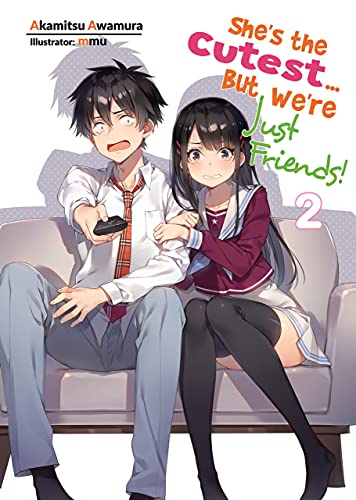 Kotobuki has indeed confessed to Kai, and suggests dating in order to get to know each other, an idea that floors him because he’s read too much manga and believes you only date AFTER falling in love The date actually goes pretty well, and they’re a cute couple. Then they coincidentally run into Jun on their date… and she can’t get over how CUTE Kotobuki is! No jealousy on her end at all. The trouble is the other end… Kotobuki had heard that Kai had a friend who came over to play games, but assumed it was, well, a female otaku stereotype. Not a stacked blonde goddess. Feeling a bit desperate and threatened, she decides to up her seduction game… which proves to be EXACTLY the wrong move. Can she and Kai recover from the backlash? And can you have a girlfriend and also have a close female friend who’s even more tactile than your girlfriend?

The most interesting thing about this book is that the drama is almost entirely one-sided. Jun is simply not remotely getting jealous, loves Kotobuki to death, and her reaction to Kai accidentally walking in on her topless is nonexistent. If the series is eventually going to get Kai and Jun together, it’s got a long way to go on Jun’s side. That said, she fills an important role here, as she allows Kai and Kotobuki to recover from their dating mishap and find steadier ground. Kai, like Jun, does not feel mature enough to be in a relationship, something that Kotobuki also realizes about herself during the course of the book. Indeed, the book may be an ad for “just friends”, as the best scenes in it are the ones with no tension or romantic angst, just the three of them hanging out and having fun. (It’s also a giant ad for anime and manga properties, and not just GA Bunko series. The lack of censorship is jaw-dropping.)

Unfortunately, after two quick volumes in February and June of 2020, there has been no more of this series in Japan. I hope we eventually get some closure. In the meantime, this is a good one if you like romcoms with a bit less drama than usual.

By Akamitsu Awamura and mmu. Released in Japan as “Ore no Onna Tomodachi ga Saikou ni Kawaii” by GA Bunko. Released in North America by J-Novel Club. Translated by Kristine Johnson and airco.

I tend to read a bit more into the plot and characterization of light novels than they sometimes deserve. This is, honestly, a survival technique – I read a lot of light novels, and only a few of them are worthy of really high praise. Most of them are “well, OK, that was decent”. So you try to look for things you enjoy, things you can sink your teeth into. For me, in this book, it was the character of Reina. She’s not the titular just friend, but she is the ‘queen bee’ of the classroom and one of Jun’s best friends. And, despite how much the two of them deny it, everyone thinks that Kai and Jun, our protagonists, are dating. So we’re meant to be happy when Kai chooses to go out with a pack of her friends to karaoke. He doesn’t have a good time, nor does she, but he thinks he did a good job, held his own. Then Reina destroys him the next day. I really liked that. That said, the book is still “decent”. 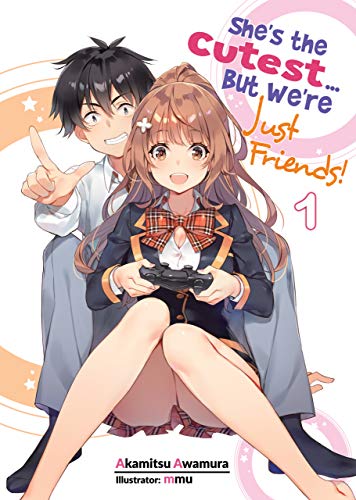 Kai is our somewhat generic protagonist. He loves manga, light novels, and games, and is known as an otaku, but is not really on the ‘creepy’ end. He goes to this high school as they are very “freedom” oriented, so you can game in school provided it’s not during class. On his first day, he meets the gorgeous Jun and acts like a typical sputtering guy… till he sees she’s whipping out Breath of the Wild. She’s an otaku as well! The two quickly bond, and over the course of the next year they become best friends, with her going over to his house to game multiple times a week. The trouble is… they look like a couple;. They sometimes act like a couple. And not everyone approves of this. Can Kai deal with both Jun’s friends AND the jerk jocks and come out with his friendship intact?

As I said, this has issues. It’s a big ol’ male fantasy, despite the male lead’s desire to stay friends with Jun rather than date her. (Fanservice is actually relatively low, limited to “wow those breasts are big”, though when Jun’s friends interrogate him they’re very coarse.) You had better enjoy high school drama or else you’re going to hate this. There’s a subplot added near the end with a teacher in the school turning out to also be someone else that I felt was perhaps one subplot too many. The ending implies this is going to be one of those “new lead girl every book” series, which subverts the premise. Most importantly, it’s a walking ad for GA Bunko, mentioning so many of their main series by name (no censoring in this book) that I almost felt ill. Don’t be a shill.

That said… I found the leads very likeable and sympathetic. I really liked Kai thinking he was doing great and getting torn apart, reminding us he’s still very much a guy who doesn’t get women. And there’s a secondary friend of Jun’s who is so annoying she actually flips back over towards hilarious. You look for the little things. And that’s enough for me to recommend this to romcom fans. I’ll get Vol. 2, despite the change in lead girls.