By Buncololi and Kantoku. Released in Japan as “Sasaki to Pi-chan” by Media Factory. Released in North America by Yen On. Translated by Alice Prowse.

It’s getting better. There are still a few times where I wince while reading the series, mainly whenever the neighbor girl is trying to manipulate Sasaki into sexually assaulting her (he doesn’t), but for the most part the series is doing what it does best: mashing up genre after genre and watching our deadpan salaryman crush all of them as he flies past. Sasaki may be a bit of a stoic sad sack, but the series wouldn’t work at all if the protagonist were, say, Kazuma from KonoSuba. It not only requires his experience as a Japanese salaryman to drive a lot of the plot, but also his reserve helps the reader glide through the plot without taking anything too seriously. Which is good, because this series is still mostly a comedy, but also bad, because there are a lot of things I think could do with being taken more seriously, such as getting the neighbor girl some therapy. 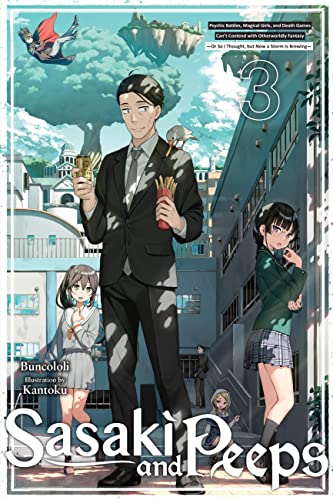 Sasaki continues to juggle the various light novel plots he finds himself in. In the fantasy world, the count’s daughter Elsa is being taken as a “concubine” by an evil Duke, so Sasaki agrees to help fake Elsa’s death and take her with him to Japan, where she can hide out in a hotel. In the “psychic” world, he continues to investigate mysterious happenings (most of which have to do with one of the other genres he’s in) while trying to get enough blackmail material on his suspicious boss. In the “magical girl” part of the book, he finds her trying to murder another psychic. Sadly, before that gets anywhere, he’s dragged into the “angels vs. demons death game” genre we started to see last time, and finally discovers what the neighbor girl has been up to. Unfortunately, everything completely is blown to hell and back due to one fatal mistake: he lets Peeps get drunk.

I do suspect a lot of the salaryman humor in this lands better in Japan than it does here – he’s constantly apologizing to the girls around him, and thanking them for their support of him, in a way that is meant to evoke the office even as it happens while they’re watching demons blow teenage girls’ heads off. The best part of the book was seeing the neighbor finally get drawn into the main plotline as opposed to being a very uncomfortable side story. She’s still very uncomfortable – I hate using the word yandere, but it does apply here, and her rape/suicide fantasies are deliberately disturbing – but now that she’s involved with everyone else, hopefully she can get a little help? Maybe? The book ends in a four-way Mexican standoff between all of the various underage girls Sasaki has pulled into his orbit – none of whom he’s remotely romantically interested in, but I see what you’re doing there. And that doesn’t even count the traditional “looks nine but is decades older” girl. Which, again, light novel trope.

It appears we’re adding aliens to the stack of plots if the cliffhanger is to be believed, though if I were Sasaki I’d worry more about calming down his not-harem first. This series is absolutely not for everyone, but if you have drenched yourself in light novel plots over the years, it can be a lot of fun.

By Buncololi and Kantoku. Released in Japan as “Sasaki to Pi-chan” by Media Factory. Released in North America by Yen On. Translated by Alice Prowse.

Content warning before we start: near the end of this volume there is an attempted rape scene of a middle schooler, and it is 100% played completely seriously. It helps to show off the strengths and weaknesses of this series in general. The author clearly wants to take several distinct genres and slam them all against each other. We’ve got isekai fantasy, esper battles, magical girls (and, because it’s the 2020s, they’re dark killer magical girls), and now we’re adding a battle between angels and demons using humans as proxy. This works pretty well when things are ridiculous, with our stoic salaryman Sasaki, his relatively stoic bird, and the amusing Futarishizuka. But it’s also trying to tell the story of an abused, suicidal middle school girl who is also deeply twisted, and it’s telling it with all the gravity it requires. Which… y’know, better than the alternative, but it GRATES against everything else. 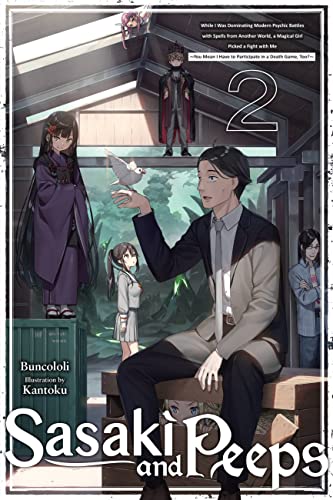 As with the first volume of this series, things are slightly more interesting on the Japan side of the equation. This is not to say that the fantasy world doesn’t have a lot of danger, but it’s fantasy isekai danger, which means you have a lot of domineering nobles and sneering merchants. All Sasaki is trying to do is sell off all the modern things he’s bringing from Japan, but now he’s involved in a proxy war between two counts, two princes, and two companies. That said… he’s an experienced Japanese salaryman. This is what he’s GOOD at. He fares far less well when being tasked with his high school girl co-worker to try to recruit a new psychic who has fire powers. This goes disastrously wrong in ways I 100% was not expecting. That said, the most interesting part of the book was when the little princess from the fantasy world stows away when Sasaki returns to Japan… not the last time these two worlds intersect, I hope.

As for “the neighbor”, whose name, we find, is Kurosu, we get a little peek into her horrible, horrible daily life. She has to steal food from school to not starve to death, and it’s middle school, so she also has to avoid the class hottie helping her lest she be in trouble with the other girls. Her mother is sleeping with a guy who tries to rape her. Oh yes, and then there’s the corpse that drops in front of her as she’s walking home. Kurosu’s story has still not really intersected with the main one yet, but I expect that to change in the next book – the “death game” mentioned in the ludicrous subtitle of the volume is hers, not Sasaki’s. We also get a bit more about the magical girl… and it’s not really great news. She’s already killer her comedy animal mascot, she alleges that Sasaki’s employers killed her entire family and friends, and she now doesn’t know whether to trust him or not. So, y’know, just another day at the office.

If you enjoy A Certain Magical Index you might get a big kick out of this, because the chaos is the point. That said, unlike Index, there’s sometimes a realistic and very dark undertone to this series. I’ll read more, but YMMV.

This book is a mess. Saying that right off the bat, confident that even those who loved the title will agree. It’s trying to be a mess, after all. I’m not sure what the meeting of the author and their editor was like, but it feels very much like “I have four different ideas for a light novel, but I can’t decide which one to write.” “Why not write all of them?” “Four different books?” “No, no, the SAME book!”. It’s the sort of thing that requires a delicate hand and solid worldbuilding, and the series that comes closest to this, A Certain Magical Index, still can’t quite pull it off a lot of the time. Sasaki and Peeps doesn’t even try, content to simply revel in its mishmash qualities. It does eventually settle into one of its genres near the end, which makes it both better written and less interesting. I think we’re here for the car crash. 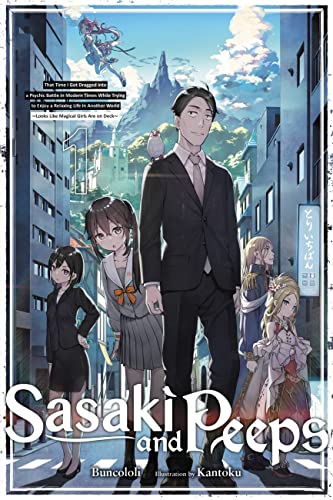 Plot 1: A salaryman in his late thirties, Sasaki, buys a pet Java sparrow, Peeps, who turns out to be a powerful macician from another world. Sasaki goes to this world, trading Japanese tech for gold and also learning magic. Plot 2: Learning magic means he gets in the way of a battle (in Japan, he and Peeps go back and forth) between rivals espers, and he is forcibly recruited into an esper organization trying to control those with powers. This goes far less well than you’d expect. Plot 3: His middle school next door neighbor, unnamed but abused and always sitting outside her front door, has a twisted crush on Sasaki that wars with her despair and suicidal thoughts. Plot 4: There’s a magical girl digging in the trash outside his apartment. This is the magical girl on deck from the subtitle, I assume.

Smoothness is not the selling point of this book. Which is a shame, as the last third of the book, which dedicates itself entirely to the isekai plotline, is the best written part, containing several excellent plot twists and a few cool battle scenes. That said, after watching the author and Sasaki flit around like… well, like a sparrow for most of the book, it feels wrong somehow. Sasaki should be a “potato” protagonist, but there’s a certain broken quality to him that shines through on occasion. His treatment of his neighbor like a stray cat that he keeps feeding is at least not as bad as, say, Higehiro, and I appreciate he did call social services, but he’s not helping there either. The book has no real romance as of yet, which is probably a good thing, as the female cast consist of a high school girl, a middle school girl, and two children.

Mostly the main problem with this book is it cannot settle down as to what it wants to be. That’s baked into the plot so it won’t get better, but I thought I’d mention that I think the plot is bad. The plot with the neighbor and the magical girl barely feature in the book, they’re just there as flavortext so far. That said, I may read a second volume, just to see if the author can keep this up. Or to see if the neighbor kills him.