This is another book that falls into the category of “not a villainess, but villainess things happen to her” books. You know, dumped by her fiancee, exiled from the royal palace, etc. Generally speaking, most of the stories in this genre tend to go for the aware, savvy sort of heroine. This is not one of those stories. Honestly, the heroine of this book, Marialite, may be more on the Katarina Claes end of the spectrum – in terms of outward personality they’re not that similar, but they both have “empathy” turned all the way up to ten while “intellectual” is at about a two. Marialite is not an airhead per se… she’s just the sort of character I refer to as the “ara ara” woman. You know, Kasumi Tendo from Ranma. Every situation, no matter what it is, is met with a hand to the cheek, a tilted head, and an “ara, ara”. That’s what we’re dealing with here. 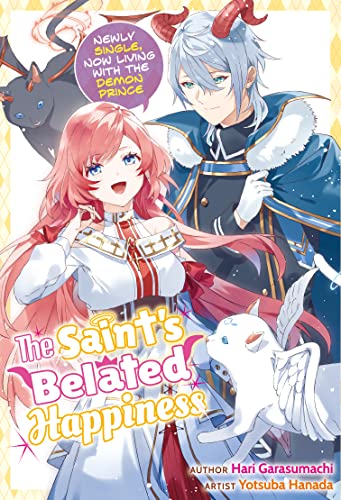 Marialite has had a pretty rough life, though if you asked her about it I doubt she’d say the same thing. Her parents are dead. When she was discovered to be the Saint, her fiancee (who was already cheating on her) was dumped and replaced with the Crown Prince. She then spend the next several years saving the kingdom with her plant-based powers. Now the kingdom has “magic tools” that will do the same thing. And she’s twenty-seven years old. So the Prince dumps her, planning to get a younger wife. Going back to her abandoned childhood home, Marialite finds a young boy hiding inside. Sorry to spoil the surprise (it’s not much of one), but he’s the Demon King of the title, and he gets much bigger very fast. He’s also over the moon for Marialite… who seems to not really realize what love is.

This book is, to be honest, highly variable. The sections with the Crown Prince are amusing if you like to see asshole misogynists get wrecked (and I do), but he’s so one-note it’s hard to really be happy. The best part of the book involves Cornelia, the daughter of a rival dukedom to the Demon King, who is a) an obnoxious ojou-sama, b) with fire magic, c) with cat ears, and d) secretly weak to characters like Marialite, who she can’t intimidate. Everything about her is great, though I wasn’t that wild about the “now she’s a maid” subplot. As for Marialite herself, her naivete about love is presented as the fault of her past relationships, both of which were terrible, but she also admits she doesn’t think she was in love with them either, so there’s little to no hurt feelings or devastation about them. This makes her something of a blank slate, to be honest. I suppose if we can have harem protagonists who are potato boys, we can have the same with shoujo romance protagonists. I just wish she had more personality.

This book does not really have a definite ending, and there may be more coming, but if so it’s not immediately obvious. Till then, if you like “dumped by the asshole prince and finds a better life” stories, or cat-eared red-headed girls who yell a lot, this is worth your time.