By Inumajin and Falmaro. Released in Japan as “Seijo-sama? Iie, Toorisugari no Mamono Tsukai desu! – Zettai Muteki no Seijo wa Mofumofu to Tabi wo suru” by Kadokawa Books. Released in North America by J-Novel Club. Translated by Meteora.

As with the last volume, the main thing you notice about this book is that it’s a comedy. That said,, things are actually pretty dark when Kanata’s not on the scene. The church is evil and is taking the money for themselves. The church is also brainwashing local ogres into having their minions attack small villages. Bitter blacksmiths are tricking their rival’s daughter into paying fake debt. And yet… when Kanata IS on the page, everyone turns into the broadest comedy. The hypercompetent adventurer Melissa turns into the ultimate whiny office lady. The evil Saint causing all this is far more annoyed that Kanata doesn’t even bother to see her as an enemy. And the massive wolf-spirit imprisoned by the Church finds that he can get far more laughs if he’s a cute puffball. The key to Kanata saving the world is not her ludicrous power to do anything, or her vague kindness that mostly revolves around fluff. It’s that she’s funny. 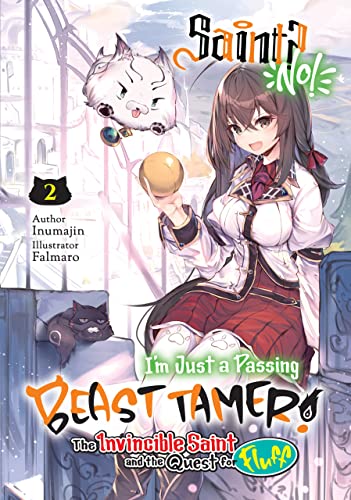 We pick up where we left off, with Kanata and her demon lord turned pussycat companion Zaggy trying to track down more fluff for Kanata to pet. They run into a small dog puffball, who Kanata nicknames Fen-Fen, who is of course the aforementioned Wolf Spirit. He’s spent decades waiting for the Saint that he’s supposed to dedicate himself to, only to be locked up by Marianne, the girl who actually does have the Saint title but has none of the Saint morality. She’s actually being led by the goddess we saw last time, who has one piece of advice for her: if you see Kanata, run away. Sadly, Marianne does not take this advice, and now has to deal with a girl who will get more fluff By Any Means Necessary, even if it means doing endless amounts of tiny, cheap good deeds.

The joke about Kanata, of course, is that she *is* the Saint, but accidentally. She’s not particularly saving lives, helping find lost pets, or taking down the evil church that’s controlling everything because it’s the right thing to do. Indeed, you could argue that she doesn’t notice what she’s doing at all. She does it because it will get her fluff. Hell, the evil Saint, Marianne, is seemingly killed by her patron goddess, only for Kanata to resurrect her… because her hair is a 10 points on the fluffy scale. No other reason. We do occasionally see flashes of her actually comprehending what’s going on… in the side story she clearly sees the cheating going on and decides to help by having Zaggy cheat on the other side… But for the most part, she’s not good or bad. She’s fluff. And since no one in this world knows what that means, it becomes an all-purpose thing to strive for, be it strength, good deeds, whatever. Fluff is what you want it to be.

Of course, Kanata wants it to be fluff she can snuggle. She may have to wait a bit, the third volume is not out in Japan yet. Till then, this is silly but… no, it’s just silly.

By Inumajin and Falmaro. Released in Japan as “Seijo-sama? Iie, Toorisugari no Mamono Tsukai desu! – Zettai Muteki no Seijo wa Mofumofu to Tabi wo suru” by Kadokawa Books. Released in North America by J-Novel Club. Translated by Meteora.

I had this on my list of new J-Novel Club releases to try out, but I didn’t really have too many high hopes. The author had written a very similar series, Woof Woof Story: I Told You to Turn Me Into a Pampered Pooch, Not Fenrir!, but that one really didn’t grab me at all. So I started to read this book, and I began to laugh. And then I kept reading, and I started laughing a lot. This is a funny book. It has a ridiculous lead character (no, she’s literally described by her brother as ridiculous), her own ridiculous goals in life (and a backstory that might seem familiar to Leadale fans), and a lot of good ridiculous dialogue, though the reader will need to be willing to go along with the standard “I did a ridiculous thing.” “YOU DID A RIDICULOUS THING?!?!?!” style comedy. Basically, this book is hella fun. And, of course, hella fluffy. 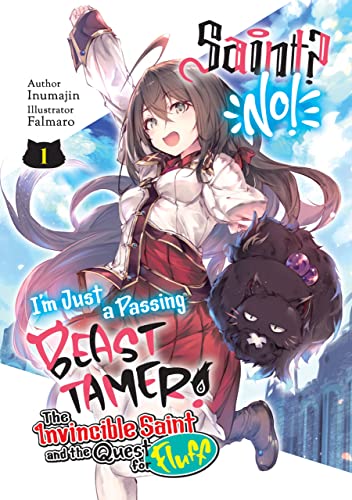 Yoshino Kanata spent her entire life in Japan in a hospital bed on life support. She regarded herself as happy because she had the internet, but those in charge of the afterlife think she had SUPER bad karma. As a result, they’re reincarnating her with all the good karma they possibly can. She’s reborn as Kanata Aldezia. Her father is the finest swordsman in the land. Her mother a great sage. She herself has won every award imaginable. And now, it’s time for the ceremony that determines the calling she will have going forward, because isekai worlds only run on RPG logic. Everyone thinks she will be a Saint. She has a different calling in mind. See, in Japan she never got to pet a cuddly animal. And here, she’s so terrifyingly powerful that animals fear her. Therefore, she’s going to be a Beast Tamer and got fluffy animals all around her! One slight problem – Beast Tamer is the biggest loser profession of them all.

So yes, Kanata is a trip, one of those heroines who does not have one ounce of common sense in her head but makes up for it with more power and determination than God. Indeed, as the final scene of the book shows, this is literally true. All she wants to do is leave the city and find fluffy monsters to pet. So far, she mostly has Zagg’iel, aka Zaggy. The former King of Demons, he’s under a curse that has essentially made him into a tubby little cat creature. The interaction between these two is both funny and heartwarming, as she loves him and roots for him even when he’s weak and has no powers. Of course, she never quite manages to leave the city. She beats up on bird creatures, tames dragons, cleans the sewers, restarts magical furnaces, and finally faces off against the new demon king and his army of mind-controlled minions Through all of this, her mindset is set on one thing: Is this fluff? Can I pet it? If not… she’s unimpressed.

So yes, this is better than Woof Woof Story and also deeply silly. I’ll be reading more. recommended for those who love OP ditzes and snuggling small creatures.