romance of the imperial capital kotogami

When I first saw that this title had been licensed, I thought that the synopsis sounded like one of Viz’s Shojo Beat supernatural titles. We’ve seen a lot of these “young human woman ends up caring for a number of yokai” series there – Kamisama Kiss, The Demon Prince of Momochi House, and Kakuriyo: Bed and Breakfast for Spirits. This one is not quite like that – the yokai are definitely serving her rather than the other way around – but it has a similar vibe. That said, it’s not a copycat, and this is certainly a wide genre to pull from. It also deals with survivor guilt, abandonment issues, and even good old fashioned murderous jealousy. Also, despite the ‘romance’ in the title, this is very much a book using the original definition of that word. Which is good, as for most of the volume the power dynamics between our heroine and any potential partner are too vast to be comfortable, and the heroine is definitely not ready for that anyway. 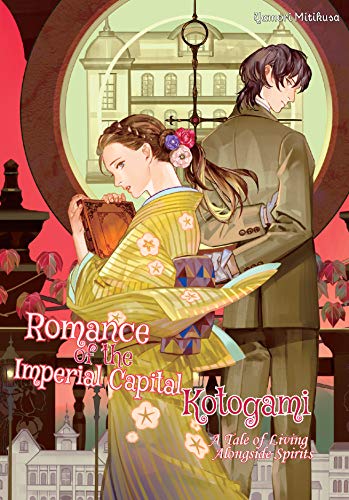 Our story takes place in not-quite-Japan around the Taisho period – the names have been changed to make it a fantasy, as this is a world where yokai are quite active. To help, the world also has Narrators, whose who can “read the story” of a yokai and control their nature, making them a kotogami. (If you think this sounds like Natsume’s Book of Friends, you’re not far off.) Our heroine Akari, however, despises all fiction and anything resembling a story. She works at a company that, among other things, makes grandfather clocks, lives in the company dorm, and avoids men telling her that she really should get married and settle down. Then one day her apartment burns to the ground thanks to a yokai on the loose. In the chaos, she runs into a police inspector and a kotogami who seem to know more than they’re saying, and ends up staying at a manor house filled with books, all with kotogami in them. Can she recover a normal life? Can she learn to enjoy fiction again? And how is this connected to her tragic past?

As with most of the best novels for women, the heroine is the main reason to read this. Akari is grumpy, practical, clearly hurting but also determined to live life the way she wants, and does not take shit from anybody. She’s also very good at her job (which is not always a good thing… there’s an underlying sexist society here, of which Akari and the author do not approve) and, as it turns out, VERY good at being a Narrator, whether she wants to be or not. Tomohito, the kotogami that she first meets, is seemingly goofy, silly, and a bit pathetic, but readers will be completely unsurprised to see this masks a very different sort of being. The “mystery” of the book is handled quite well, with revelations coming in at just the right time, along with one or two dramatic action scenes. And the supporting cast are also fun.

This is a one-shot, and I think ends on just the right note. I’d like to read more by this author (they apparently have another series out from Earth Star, this one more isekai fantasy), but am content with having read this.