raven of the inner palace

By Kouko Shirakawa and Ayuko. Released in Japan as “Kōkyū no Karasu” by Shueisha Orange Bunko. Released in North America by Airship. Translated by Amelia Mason.

Sometimes people just want variations on a theme. Looks at why isekai is so popular, despite the fact that everyone you talk to seemingly hates it. Heck, look at Villainess novels, where I feel like Holt from Brooklyn Nine-Nine. “I’ve read this story before.” “AND YOU’LL READ IT AGAIN!” And now we have the mini-genre of “intrigue in the inner court palace of the Emperor and his harem”, where I’ve already got The Apothecary Diaries (mystery series with a side of toxic romance), Culinary Chronicles of the Court Flower (foodie shoujo with doomed romance very much not as the side), and Though I Am An Inept Villainess (bodyswap AND villainess AND romance AND intrigue). And now we have Raven of the Inner Palace, which has mystery, and also romance, but most importantly it has ghosts. So many ghosts, they’re honestly choking the Inner Palace. Fortunately, we have a young woman who can help them move on. Somewhat less fortunately, she’s stuck there for the rest of her life, because she is Special ™. 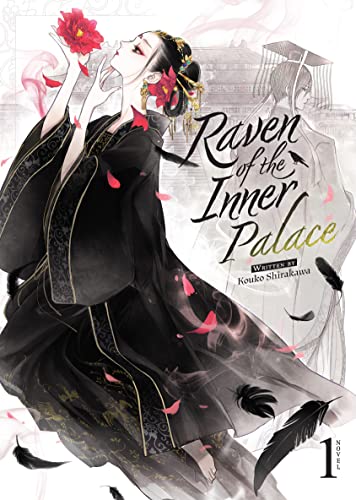 Jusetsu is the Raven Consort, who, unlike the other Consorts in the Inner Palace, does not spend the nights “having conversations” with the Emperor. Instead, she helps others in the court to find lost items, or to remove a curse with her mystical powers. Now the Emperor, who is relatively new to power after overthrowing the Dowager Queen (who is ludicrously evil in an almost laughable way, despite the fact that we never see her) is here to see Jusetsu to see if she can identify who is the owner of a jade earring dropped on the ground. From here, and despite Jusetsu being standoffish and prickly and the Emperor seemingly being stoic, the two grow closer, and each learns the backstory of the other.

As with a lot of mystery series, I don’t want to give the game away by talking about the plot too much. I do like Jusetsu, who different enough from the other “court intrigue” heroines to be her own person. She turns out to be socially awkward as hell, partly from her tragic past, but mostly, it’s inferred, from the training she got to be the next Raven Consot, which consisted of emphasizing that she should have a minimum of human contacts. That goes out the window in the first book. Not only is the Emperor clearly starting to fall for her (she doesn’t notice) and she gains a court lady and a second servant. This is clearly a good thing for her character development, but I suspect a lot of folks are not going to like her straying out of her lane in the future. It does help that she’s very good at the supernatural part, which is the other half of this book. The ghosts are more sad than terrifying, but I’m sure we’ll have even more of them in future.

This also got an anime in the fall (which, be warned, used the Chinese names rather than the Japanese ones as this translation does). It succeeds for the same reason the other three series I mentioned do. Not because of the genre, or because of the mysteries. It’s because they’re REALLY well written. I wasn’t planning to read more. It’s now definitely one I’ll read more of.