I enjoyed the first volume of this series a lot more than I expected, and I’m pleased to see that the second volume rewards my expectations by being just as good. Once again, there is technically a bit of harem comedy here, but not much – the main guy and girl like each other but are too shy, and the new girl introduced here might like the guy too, but clearly sees which way the wind is blowing. Other than that, this book once again looks at how failures from the past can cause an inability to move forward, be it in regards to a person’s passion and confidence, or in their own emotional turmoil and rage. Last time I was impressed with just how perpetually angry Eru is, and that gets even worse here, as I’m amazed that she didn’t end the book by simply killing the cast. The reason her anger soars even higher is one of the catalysts of it: new girl Aina. 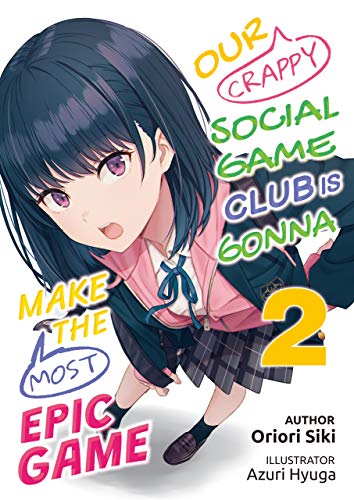 The club has been invited to a competition in Tokyo. A number of schools are there, and they’re paired in groups of two to compete with each other to see who can build the best game around a theme. Unfortunately, just as they need to buckle down, various disasters pile up, chief among them being the aforementioned Aina (who also gets the cover art), a former actress now trying to be a voice actress and someone who has a nasty past history with Eru, to the point where Eru is physically violent the first time she sees her. Fortunately, the group keeps working together, but no one can get to the heart of what the issues between them are, and neither one are talking. More to the point, Aina has a cheery, somewhat ditzy personality that proves to be a mask she takes on and off… as Kai finds out when she starts trying to manipulate him.

I will admit, I did think a lot of Ami from Toradora! as I was reading about Aina, but they don’t really go in quite the same direction. The book, for the most part, emphasizes the difficulties in getting a group like this to communicate properly – a group of artists and gamers, most of whom are introverts in some way, and with resentment and jealousy seething around. This is even true of Kai, who finds himself not only falling for the bouncy Nanaka, but also seeing her own potential, which he feels will far outstrip his own. (Kai has to be told to stop denigrating himself at least five times in this book.) Eru and Aina’s past is filled with the sort of horrible shit that teenagers do to each other, and (like a lot of those sorts of things) is resolved a little more easily than everyone expected. And there are a lot of good conversations here between Kai and the main girls, very few of which involve romance at all. Oh yes, word of warning: we not only get a tiny, drill-haired arrogant princess girl as their opponent, but there’s ALSO a minion she has to LITERALLY stand on and make herself taller. It was about eight anime cliches in the space of three pages.

Basically, if you don’t mind all the gaming talk, which can get a bit inside baseball, this is simply a fun group to read about. Even Kai’s older sister, who is written to be “the annoying one”, is not TOO annoying. Fans of series that try to examine why teenagers are the way they are should give this a try.

Sometimes you just have to power through even when your initial impression is bad. This novel started off iffy for me. A sad-sack protagonist who had difficulties communicating with others. A perky, happy ball of sunshine who ends up dragging him back into a world he was desperately trying to avoid. Even the world the book takes place in didn’t impress me; it’s not a fantasy or isekai, but it does take place in a world where education has become driven by “gacha”, that game mechanic where you spend money to get a cool thing – possibly. I’m not sure why it needed to jump through the extra hoops, unless a pre-reader asked why everyone cared so much about social games. Fortunately, after a rough start it settles into what the book is actually about: the trauma of past failures crippling your ability to move forward and recognize your own worth, and how others can help you move past that. 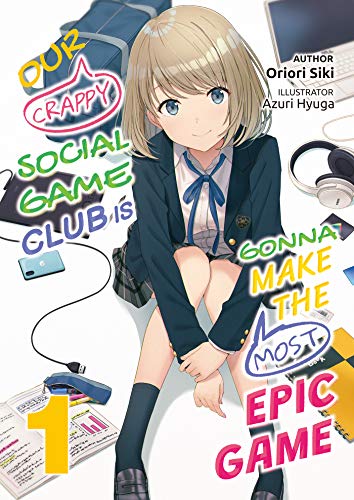 Kai has just moved far from Tokyo after being driven from his previous school, one of the best in the country, for sabotaging a popular social game for reasons we are not immediately privy to. He’s trying to move on and have nothing to do with social games, but unfortunately, he’s arrived at one of those “everyone has to be in a club” schools, and the girl showing him around, Aoi, is head of the Social Game club, which consists of her, programmer and gacha-addict Aya, and perpetually angry artist Eru. The club is about to be shut down, and the Student Council President hates it, so Kai joins up impulsively. Unfortunately, the club is a mess – Eru is angry at Aoi, Kai, and most everything else, Aya is never there as she has to gacha all the time, and Aoi’s bubbly, happy side masks a girl who fears she is useless and a burden. Can the club be saved in time?

As I said, when you get past the original cliches (there’s also a pervy older sister who loves to tease Kai, and the arrogant/snarky student council duo are pure 100% cliche), there’s more to like here than expected. Kai, of course, did not sabotage the game back in Tokyo because he was being a villain, it was for a very good reason. Both he and Aoi suffer from crippling self-doubt, and both of them have to have it demonstrated to them, explicitly, that their fears are unfounded. Kai really does have terrific value as a planner, as his sempai at the Tokyo school (who is awesome, and has a great semi-robotic speech pattern) demonstrated to him, and while Aoi’s art is still not as good as Eru’s, she is improving constantly and is ready to take the next step. They make their game better AND they step in to help save the original game that Kai sabotaged. It’s quite the feel good ending.

So yes, there’s gold to be found here, though I’d recommend liking gacha games a whole lot more than I do if you really want to get the full experience.