my stepmom's daughter is my ex

By Kyosuke Kamishiro and TakayaKi. Released in Japan as “Mamahaha no Tsurego ga Motokano datta” by Kadokawa Sneaker Bunko. Released in North America by J-Novel Club. Translated by Gierrlon Dunn.

This is very much a book of two halves. The first half is essentially more of the same stuff that we saw in the initial volume, with our two leads bitterly grousing at each other while also showing that eventually, when they get their heads out of their asses, they will once more be a terrific couple. The second half introduces a new girl to the mix, set up to be a rival love interest. That said, the author knows what the genre is. This is not the old school genre of “guy and the 100 girls who really, really etc. love him”, it’s part of the more recent “we are cute couples who flirt adorably” genre, with the twist that they aren’t a couple anymore and their flirting is bickering. As such, sympathy in the book stays solely with Yume, though the new girl is very nice and sweet, which is a plus, and possibly makes up for the fact that Akatsuki is still in this. 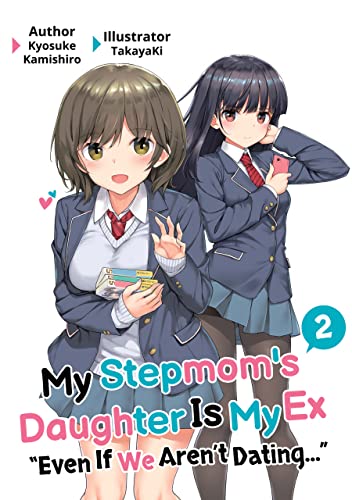 Mizuto and Yume continue to stubbornly not get along, despite the fact that their entire life is a series of light novel romcom moments (as is literally pointed out later). There’s seat changes in class, which brings back awkward memories; a Mother’s Day event which brings back sad awkward memories; a sleepover with their mutual friends which turns hideously awkward when it turns out that said friends live next door to each other; and a battle over best grades in the school that goes beyond awkward and into painful. We are then introduced to Isana Hagashira, who hangs out in the library, loves light novels, is socially inept, and has really large breasts (something she will point out, as she regards it as one of her few interesting features). She and Mizuto bond immediately, leaving Yume forced to confront her own repressed feelings.

Isana reminded me not a little of Kotomi Ichinose from Clannad, and the smile she gives on the cover art doesn’t really match her in this book, where she’s mostly rather expressionless, as part of her social difficulties. She’s really sweet, and I enjoyed seeing Akatsuki and Yume slowly force her to realize that she’s fallen in love with Mizuto. Unfortunately, framing her character as having crippling self-esteem issues and then having to have her forcibly rejected due to… well, due to the plot of the series… seems a bit mean. That said, it’s not nearly as mean as forcing us to spend time around Kagure and Akatsuki, who are there to remind us what a really toxic couple are like. Not that they’re dating, but this certainly is not the “if we just admitted we still love each other everything would be solved” of our two leads, there’s some real hatred here. I fear we will learn more about it later.

So yeah, this series still works best when it’s about the main couple. Fortunately, they’re the stars of the book. Recommended with reservations.

By Kyosuke Kamishiro and TakayaKi. Released in Japan as “Mamahaha no Tsurego ga Motokano datta” by Kadokawa Sneaker Bunko. Released in North America by J-Novel Club. Translated by Gierrlon Dunn.

This may come as a shocking surprise to regular readers of this blog, but I am no longer a teenager. This can sometimes be difficult when you are reviewing books whose primary audience is either teens or those who were just teens a year or two ago. Things that make total sense to you when you are the same age as the main character tend to make you scratch your head or yell at the main character later in life. Fortunately, I think this series is designed so that even those the same age as the characters will be yelling at them. Two awkward teens who break up due to poor communication skills are forced to realize that they’re perfect for each other, but are too stubborn to admit it. What that means in practice is that, under a veneer of caustic sniping and bitter inner monologues, this is one of those “cute kids flirt” romance titles. 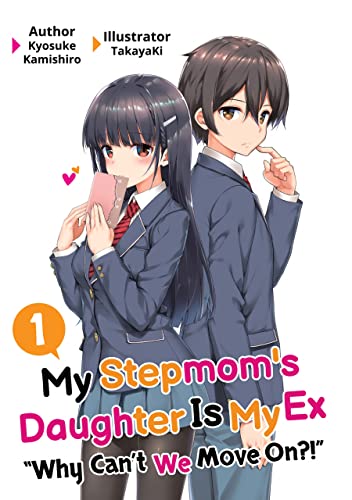 Mizuto, a bookish young man, and Yume, a nerdy and shy girl, become a couple and start to date in middle school. Sadly, due to the aforementioned lack of good communication, they also break up about a year later. They managed to keep the relationship a secret from their parents… which might be a bad thing, as now his dad has married her mom, and they’re family! For the sake of the parents (who are barely in this book, to be honest), the two try to put on a public face of getting along, but when alone they’re sarcastic, bitter and constantly sniping at each other. He has a tendency to default to “jerk”. She’s a bit of a mess. Despite this, both of them still do have the characteristics that made them attractive to each other. He’s really caring and kind of hot when he bothers to try. She’s grown up to be gorgeous and is making a big effort to be more outgoing. Dammit… this is terrible!

I will note that I was super relieved when I saw the POV switch to Yume after the first chapter, because this is the sort of story that absolutely would not work if it was told from only one side. The chapters alternate between Mizuto’s grumpy loner guy and Yume’s freaking out internally girl, and it helps to make it more understandable why things went south, and also how easy it would be to fix if they weren’t both really stubborn. Which they are, this is like seven volumes in Japan and has just had an anime announced, so resolution is not forthcoming. There was a rather annoying plot point about 3/4 of the way into the book, where Yume’s new friend in high school is implied to be a dangerous stalker sort, and wants to marry Mizuto so she can be around Yume. I was fine with the plot when reading it as I assumed this was total bullshit that said friend cooked up as a plan to get our leads closer together… then it turned out to be true. Bleah.

That said, overall this was pretty cute. If you like cute teenage romance with a side order of bitching at each other, this is probably one you should pick up.