my quiet blacksmith life in another world

Still enjoying this series, don’t get me wrong, but it’s time I face up to the face that I am skimming a large chunk of it every time simply because I really don’t care one jot about the Blacksmith Life part of this book. There is just so much detail about how to make swords correctly, knives correctly, and katanas correctly, including hilts and scabbards and the like. And of course we also get to hear Eizo talk a lot about how he’s using his cheats too, so these are essentially IKEA blueprints that contain the S. Harris punchline “then a miracle occurs” halfway through the process. It is a BIG chunk of every book, and I think the series would benefit from less of it, even if it means sacrificing a bit of the slow life pacing. Which gets a bit of a kick in the pants in this volume anyway, as halfway through Eizo is called out to help with a monster subjugation that turns nasty. 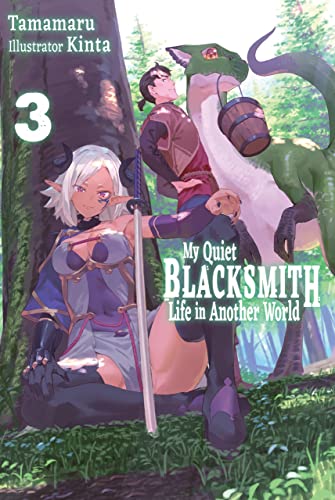 In the first half of this volume, we essentially get the same thing as the second half of Book 2, only with the elf replaced with a demon. Nilda recently suffered a crushing defeat battling against a mere human, and the mere human had a very familiar sword. Now Nilda wants a sword of her own to challenge her, so basically stakes out Eizo’s hometown till she runs into him. What follows is a lot of slow life sword building and all the girls admiring Eizo’s muscular blacksmith body. After this, Marius asks that Eizo go monster exterminating with them, so that he can repair the swords and armor when they’re broken in battle. This battle ends up being more personal than he expected, as he runs into the elf Lidy, who just left his shop with her own magic sword. She’s here to help them take out the main monster boss… and avenge her brother.

I gloss over it a bit in these reviews, but this is still very much that genre of “a harem series without any actual sex or even kissing” that is so popular in Japan. Nilda clearly likes Eizo. By the end of the book, Livy has gone back to his shop and moved in with everyone. We meet a young woman, Frederica, who is in charge of logistics and can best be summed up as “small insecure accountant” but also clearly is in love with Eizo by the end of the book. Hell, it’s implied that the Queen of the Demons has taken a liking to him as well, and the flashforwards we occasionally see very pointedly say he has a wife but never say who it is. This book is written for folks who love seeing a man surrounded by a dozen women but who will be making precisely zero moves. I know this upsets some light novel fans.

Still, it is what it is. It’s slow life, adding girls one by one, and smithing. So much smithing.

One thing that I’m not sure I say often enough here is that you don’t need a reason to like something. There are, of course, numerous reasons to NOT like something, but sometimes, let’s face it, you just vibe despite yourself. My Quiet Blacksmith Life in Another World is, on paper, something that hits a lot of the wrong buttons. Our hero has mad cheat skills. He constantly puts himself down at every opportunity, while everyone around insists he’s the best. He’s not just a blacksmith but a brilliant swordsman (which he will not admit). Last book he accumulated three women who like him, two of whom go so far as to move in with him. In this new book he meets a noble daughter (who moves in with him) and a cute elf. The women, or at least the ones who move in, are clearly in love with him, something he refuses to acknowledge. Oh, and it’s super long. This should be dire. Instead, it’s a great example of slow life. 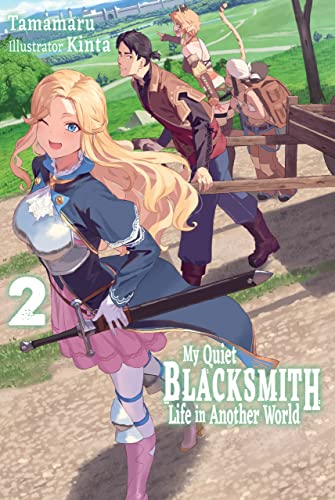 There are two main plots in this volume. In the first, we find out why Eizo’s friend the gate guard suddenly vanished one day – he’s actually the third son of a noble family, and there’s a dispute over who takes over after the count and his eldest son die in mysterious circumstances. The 2nd son is from a mistress, so Marius is in line to take over, but second son does not like that at all. As part of all this, Diana, the daughter in the family, is sent to live with Eizo and company in hiding. That said, you know Eizo’s gonna get drawn into the throne war as well. After this, an elf named Lidy arrives with a broken mithril sword, which she asks Eizo to repair. This will be tricky, as the sword is also magical, so it can’t be reforged using normal means. Fortunately, it turns out that our hero has the ability to make magical swords too. Phew. Bullet dodged.

As with the first book, get ready for a lot of detailed description of forging swords, which, if removed from the book’s page count, would make this a normal sized light novel. That said, the forging is also what makes the slow life part happen, as for once this is a slow life book that really is slow life, rather than “I am trying to have a slow life but keep getting caught in life-threatening schemes”. And, let’s face it, looked at from the perspective of the women in the home watching Eizo smith, it’s seeing a handsome, kind, and sexy man show off his strong muscles and exquisite attention to detail. They are getting a full meal of eye candy every day. I will admit to being amused at the extra addition to the household, an wonder if this can be the light novel equivalent of the 100 Girlfriends Who Really, Really, Really, Really, REALLY Love You. Well, probably not, Eizo will never try anything. The others might, though.

So yeah, does most things wrong, still quite good. Give it a shot.

Obviously one should not read too much into the life of the author from the work they are writing. But sometimes it can be pretty easy to see that the creator is a little bit older than most light novel creators. Especially these days, where Truck-kun has been going after beleaguered office workers rather than shut-in high school NEETs. There’s a lack of gaming terminology and dungeon crawling. The harem, if there is one (there usually is) tends to be more familial than horny, at least on the part of the lead. And, of course, despite having super amazing powers and the ability to save the world, our protagonist wants to do nothing but relax and putter around the house doing what they love best. This is all very well and good. In this book, it turns out what the protagonist (and the author) love best is DIY. You will be reading about making swords and knives. You will be reading about building additions to houses. You will be reading this a LOT. 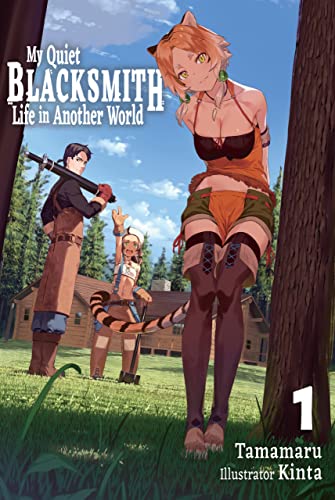 The setup is cookie-cutter. Our hero, Eizo, dies after saving a cat (but not himself) from a truck while on his way home from his crippling IT job. Turns out the cat was a goddess, and that it was not Eizo’s time to die. To try to salvage this, the goddess sends Eizo to a fantasy world, 10 years or so younger than he was (so about thirty). Eizo wants to be able to create things, so he gets knowledge of blacksmithing and the like, as well as some self-defense skills and magic. And then he’s dumped by a cabin in a forest. He wastes no time setting up shop, and quickly gains two companions: Samya, a beastgirl that he saves after she was savaged by a bear, and Rike, a dwarf who sees his handiwork and demands that she become his disciple. Because yeah, turns out he’s not just a normal blacksmith, he’s The Best There Is.

The edges of this book are interesting. There’s a prologue and an epilogue taking place many years after the main events that play this as “the creation of legends”, complete with a hero vs. demon lord scenario, that I found worked really well. We get two side-stories at the end that show the POV of other characters, and it’s interesting, particularly Helen, who is introduced to us (from Eizo’s POV) as something of a meathead swordswoman, but who turns out to be far more serious and practical when we get inside her own head. Unfortunately (and this is a common problem with slow life books) most of the book is from Eizo’s POV, and Christ, he’s dull. Show, don’t tell is left to die at the side of a ditch here, as we get page after page of him making swords, making knives, doing woodworking, chopping trees, all of which goes on forever. Even the fight near the end, where he takes on a massive bear, is fairly tedious as fights go.

As I said, there’s the hint of a good story around the edges of the book. I may read the second volume. But I think the author would be better off getting into woodworking and metallurgy themselves rather than have their creation tell us about it in excruciating detail.