my daughter left the nest

There is a certain disconnect in this novel which threw me off for a time till I realized what it was doing. The daughter leaving the nest happens right at the start of the book, and returning an S-Ranked adventurer right at the end, and so there’s a lot of middle to fill. Some of it can be frustrating at first glance, such as the running gag of Angeline starting off on a vacation to see her dad again at long last only to have it cut short because other issues take priority or because she’s the only really strong adventurer in the area. As it turns out, though, it’s more than a running gag, it’s a part of a greater problem that needs fixing. That said, we do get a reunion at the end, and there’s plenty of what I would call the meat of this book: Angeline praising her father to a ridiculous degree, and Belgrieve proving that it’s not just rose-tinted glasses, he really is that good. 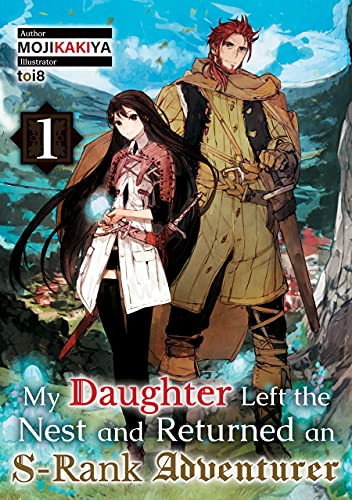 Belgrieve left his village to be a top adventurer… but a bit later lost a leg. While still an E-rank. So he went back to the village, put up with the ridicule, and set out to do whatever else he could. In fact, despite his prosthetic leg, he’s managed to become quite strong simply by constant monster hunting and gathering supplies. Then one day he finds an abandoned child in the forest, and raises her as his own. Twelve years later, inspired by the stories her father told her, Angeline goes out to the big city to become an adventurer herself. She has a lot more success than her father did, and five years later is the top adventurer in the city, and possibly even in the top adventurers in the country. Unfortunately, there’s also a larger amount of fiends lately, meaning she has no time at all to return home and see her dad. What can she do to fix this?

As noted when this title was licensed, this is NOT going to be a Bunny Drop or If It’s for My Daughter, I’d Even Defeat the Demon Lord series. All 10 volumes of S-Ranked Daughter are out in Japan, and from what I hear the relationship remains a normal dad and daughter relationship. This doesn’t mean that she’s not obsessed with her dad – a lot of the comedy comes from hearing just HOW obsessed with her dad she is. But knowing it won’t go “there” means we’re able to enjoy it as a typical spoiled daughter behavior. Plus, honestly, he deserves most of it. Turns out, prosthetic or no, Belgrieve is able to take on C-class monsters with ease, and makes friends with the local gods to boot. Which might come in handy in future books, as we get hints that someone is trying to raise a lot of demons for some sinister purpose.

The cast is more than the two of them, of course. I particularly like the family of nobles we meet, three daughters who can be summed up as “sensible”, “airhead”, and “named after a font”. Still, it’s dad and daughter you’re hear to read about, and I will be looking forward to Book 2.