One of the most common afterwords in light novels, particularly when a book was originally published on the web, is the author talking about how they were only writing this book to amuse themselves and they had no idea it would get fans, or get published, or get an anime, etc. Usually I take this with a grain of salt, particularly when the book ends up having all the most popular cliches that are currently selling. With Modern Villainess, though, I 100% believe the author was not writing this for anyone but themselves, because it really does not seem to care about the common cliches. Our reincarnated-as-a-child heroine does not bother to act childish except to occasionally say “yay, pudding!”. About the only cliche that remains in place is the heroine believing that, no matter what changes she makes, she is doomed. But the answer in this case is not to learn magic and swordplay (non-existent), or make friends (though she does do that). It’s to become a tycoon. 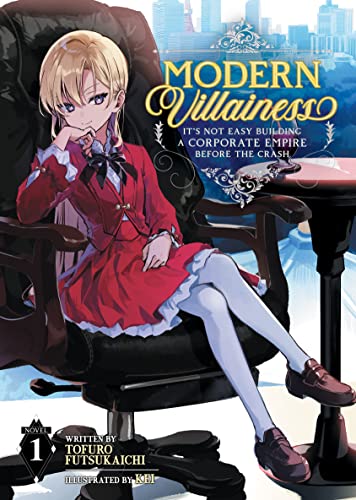 As you’d expect by now, our heroine has been reborn into the life of a villainess from an otome game. Only this otome game is set in an alternate-world modern Japan, and she ends up ruined by the bubble bursting in 2008. In order to avoid that, she’ll need to invest wisely. Shame that she’s just a little kid. Also, both her parents are dead. And she’s sort of exiled from the family due to various scandals. Oh, and she might be descended from Russian royalty. And, yes, her family’s finances are in danger. Fortunately, she has a savvy butler who simply accepts that this girl is a genius, and so she sets out to fix her life via mergers, investments, buying up debt, and making herself a Very Important Person to the government of Japan. Unfortunately, that also attracts the attention of other countries.

The goal here was to write a villainess book that was not like others, which this mostly manages to do. She still has a mini-harem of young, brilliant boys, all of whom are set to “betray her” at the end of the otome game. But for the most part, this book is about economics. So much economics. The glossary at the end of each chapter, when added up, runs to about 25-30 pages. It can be difficult to keep track of the bankers, lenders, oil barons, and politicians who come into Runa’s life, but it’s also a lot of fun seeing her managing to outflummox everyone with the power of her Swiss bank account. (Those who don’t like capitalism will want to skip this, trust me.) Despite essentially being the star of Monopoly, Runa is surprisingly likeable, and we do occasionally see her making mistakes, which is refreshing. It’s a lot of fun if you can get through the pages and pages of money, power, and the combination therein.

Our heroine is still in elementary school at the end of this volume, so we’ve got a ways to go before we get to the ominous prologue (where we also see the heroine, who otherwise doesn’t show up). If you want something different in your villainess books, give this a shot.

(Also, kudos to her friend Hotaru, who actually does seem to have magic powers in an otherwise magicless book. And also looks exactly like Hotaru from Sailor Moon.)