By Piero Karasu and Yuri Kisaragi. Released in Japan as “Tensei Oujo to Tensai Reijou no Mahou Kakumei” by Fujimi Fantasia Bunko. Released in North America by Yen On. Translated by Haydn Trowell.

We’ve had enough villainess books by now that everyone knows the “Stations of the Canon” so to speak, and so therefore it warms my heart to see that we don’t have to dwell on them forever. One of our heroines, the reincarnated princess (who is NOT the villainess in this story) gains her memories of her life in Japan, discovers she’s in a fantasy world, and rushes off to go learn magic!… and then twelve years pass. As for the supposed villainess, we hit the high points in the by now traditional scene. Her fiance shames her in a public setting. Every other guy she knows is also sneering at her. She’s innocent, but no one believes her. No offense, but we’ve done this. And then our princess smashes through the window on her magical science broom, immediately realizes that this is a villainess shaming story, and yeets the villainess out the window with her. No time for that, there’s SCIENCE to be done! 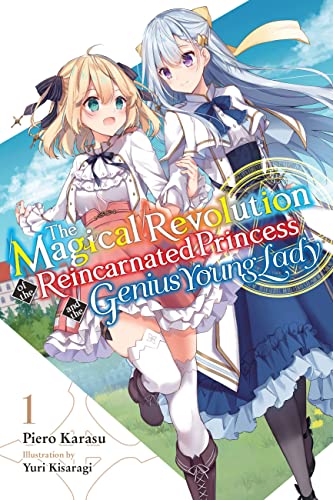 Anisphia, aka Anis, is the titular princess. In a land where magic power is strongest in the royal family, she can’t use magic at all. But that’s not going to stop her dreams. She removes herself from succession, retires to a side mansion, and proceeds to use her vague knowledge from Japan and sheer GUTS to make tools that work using magic but that can be wielded by anyone… including her! For the most part, this has meant kettles powered by spirits, etc. But she has grander plans, and needs an assistant, preferably one who is a magic savant. Enter Euphyllia, aka Euphie, the duke’s daughter and fiancee to Anis’ younger brother. Having just been publicly shamed in front of most of nobility and dumped by her fiance, Euphie’s marriage prospects are near zero. So why not let her assist Anis in creating new tools? And if they have to fight a dragon too, well, so be it.

The manga of this series is coming out in a month or so, and I’m not sure how well it’s going to work, because so much of Anis and Euphie depend on the reader hearing the inner narration. Anis can seem like a ball of chaos, and she is a lot of the time, but there is real method to her madness, and deep down she’s desperate for the magic that everyone else has. As for Euphie, it’s rare we see the “villainess” (she’s nothing of the sort) so broken by having her engagement called off, and she spends most of the first half of this book feeling miserable and like she failed everyone. Seeing her gradually come into her own is a huge treat. As for the “yuri” of the series, well, though the word “lesbian” is not used, Anis has stated that she likes girls and will not marry a boy, which is close enough, probably. She freely admits one reason she wanted Euphie as her assistant is she’s gorgeous. I suspect once the two work out their issues romance will blossom quickly.

There’s still a lot left unresolved at the end of this book, most notably Anis’ younger brother, the instigator of all this, as well as the baron’s daughter who has “otome game protagonist” written all over her. But honestly, I’m not here for the villainess vibe. I just want to see Anis and Euphie hang out together and invent new things. A definite winner.