By Syousa. and sime. Released in Japan by Legend Novels (Kodansha). Released in North America by J-Novel Club. Translated by Fatuma Muhamed.

I find myself saying “this is a book of two halves” quite often, but it fits with this one as well, so I’m going to stick with it. Our hero is Gaius, a huge ex-soldier who has left his position in the kingdom for reasons that are hinted at but never quite fully explained, and gone back to his home village… which was destroyed long before. He’s come to put his relative’s ashes to rest. Then he comes across a monster trying to kill what sounds like a child in the woods, but turns out to be a Kobold, which is to say a cute puppy that walks on two legs and talks. She takes him to her village, which is recovering from an attack by humans, and he starts off as a prisoner. But gradually he endears himself to everyone there, and life is wonderful… at least until humanity reinserts itself into his life. From there, the book takes a much darker and more tragic turn. 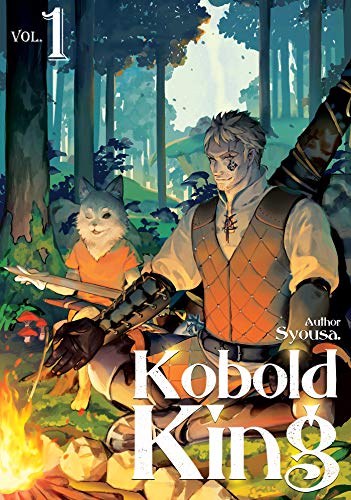 Frankly, Gaius fits in much better with the kobolds than he does with other humans, and not just because he’s one-quarter troll. He’s a huge bear of a man, really sweet and nice but also tends to act without thinking and does not do well with politics or tactics… you can sense why he left the kingdom, in the middle of a tactical war, without really being given the gist. He’s also one of those “I smile but it looks scary” types. The best part of the book is the first third or so, which is just him and the kobolds, as he ingratiates himself and proves indispensable to them. The middle sags a little by adding a few “this is more like anime” sort of characters – his ex-adjutant is a half-elf who’s in love with him, something which everyone can see except him. There’s also his adopted daughter Darke, whose backstory is not revealed till the end, which means mostly she irritates, as she wants to be Gaius’ first lover. And there is a teenage dwarf, Emon (his name is a pun on Doraemon), who wants to be a strong and brave warrior.

After a middle third of these three joining the cast, the humans (who had already driven the kobolds from their first village and killed a great number of them) return to finish the job. I knew there would be another battle, but I wasn’t expecting it to get so dark – Gaius’ attempt at negotiation is an utter failure, and characters we’ve come to care about die or are permanently disabled. That said, it serves to emphasize the aims of the book, which is “war is hell” and “humans are bastards”. There’s a battle for a throne between two royal family members, and though we never see either royal, both sides look pretty bad to me. The kobolds are dismissed as “monsters” and therefore creatures to be exterminated. We meet a band of evil adventurers (an excellent part of the book that shows off the dark side of adventuring after reading all those isekais) and see how each one is individually the worst.

So in the end this is a good book in getting Gaius to stand up and fight again, rather than simply retreating, but it’s a downer, frankly. Fortunately, it does not seem like the sort of series that’s going to run and run, so things should resolve soon. Worth a read.