Kouji Kumeta, back in the olden days when he was romanized as Koji Kumeta, wrote a series called Sayonara, Zetsubou-sensei that was dear to my heart. Featuring a despairing teacher, his eccentric class of students, and overanalysis of Japanese trends and cliches, it ran for 30 volumes and features a very surreal, quite disturbing ending. Sadly, it sold less and less well over here in North America, and petered out with the fourteenth volume. But now, moving from Weekly to Monthly Shonen Magazine, we have a new series from Kumeta, starring a father who desperately wants to hide his profession from his elementary school-aged daughter… because he draws ecchi manga. Indeed, his most popular series, Testicoooool, probably gives you an idea why he does not want his daughter to know this. That said… despite the more realistic premise, this series is for fans of what Kumeta does best: overanalyse things to death, make obscure references, and draw striking poses of most of the characters. The art continues to be fantastic. 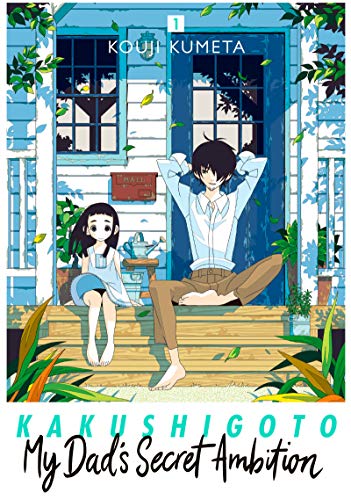 There is, to be fair, more of an attempt to hold to the plot and characterization of the title than there ever was with Zetsubou-sensei, which was an excuse for anything to happen. Most of the chapters are about two things: Kakushi’s attempts to hide his manga profession from his daughter and actually drawing the manga with his assistants, and Hime’s school life with her teacher and the cast of Zetsubou… OK, yeah, there’s no getting around that. Hime’s classmates are very obviously elementary school versions of the girls from Zetsubou-sensei. I spotted Chiri, Akira, Nami, Kafuka, Manami, Maria, Matoi… they all have slightly different names, of course, but even then, “Riko Kitsuchi” is clearly “Chiri Kitsu” swapped around. He’s having fun. That said, apart from Riko being a bit overbearing, they don’t ACT like their counterparts. It’s pure fanservice.

Hime’s mother is not in the picture, and Kakushi is shown to be a single parent. This allows him to occasionally be a “harem protagonist”, though like most of those he’s clueless about it. Hime’s teacher clearly has a crush on him, one chapter has him accidentally winning over several single women in the area, and a high school girl trying to be an idol, who finds that Kakushi actually listens to her rambling, might be a stalker in the making. That said, Kakushi only has eyes for his little girl, who he is deeply overprotective of. Many of the chapters show him trying to watch over her and make sure she isn’t bullied by the other kids (which is not going to happen, mostly as Hime is a sweetie pie). As for whether she will find out… well, the manga begins with her, as a high school girl, having the secret deliberately revealed to her, and the end of this volume implies that’s because Kakushi has died. (I’d say that ending is too dark for a comedy manga, but then remember how Zetsubou ended, so maybe…)

It’s the in between that counts, though, and this series ended up running for twelve volumes. I’ll be reading more, though I admit I read it for the creator, not the characters or plot.