By Reki Kawahara and Shimeji. Released in Japan by ASCII Mediaworks. Released in North America by Yen On. Translated by Jenny McKeon.

Last time I said it might be 2020 before we see the next book in this series, and here we are. More amusingly, last time I talked about this series have a better class of villains than SAO or Accel World, and in the afterword here’s Kawahara talking about how he hates it when villains turn good and always has his villains be “extra evil” because of it. Kawahara-san, you are wrong and should feel bad, at least about the second part of that. This particular book is sort of a breather volume in the series, with minimal battles but a whole lot of set up for what’s to come. Liquidizer, who gets the subtitle this time around as well as a second cover picture in a row, isn’t joining the good guys per se. But she wants Trancer back, and for that she’s willing to join forces with Minoru if she must. Meanwhile, Minoru is slowly (though he doesn’t realize this, which is honestly a good thing) letting others into his life. 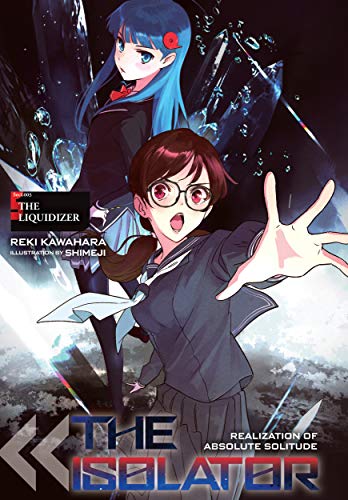 We get a large chunk of the book that takes place at Minoru’s school, including a handsome guy who is highly interested in Minoru, mostly as he improves vastly on his midterm grades. Of course, the question is was this him being smart or others falling – there’s a rash of illness going around the school, leading the previous top scorers to all be too tired and drawn to do their best. This applies to athletics as well, including Minoru’s not-girlfriend Tomomi, who is feeling more and more as if she doesn’t want to run – to the point where she eventually collapses and goes to hospital. We do eventually figure out who’s behind this, but not till the cliffhanger ending. Still, it’s far more school than we’ve had in the previous book.

The rest of the volume is devoted to Liquidizer and her request for help in recovering Trancer from the hands of the… good guys? Well, that’s a good question. Given this is a book where the author has decided not to make all his villains evil beyond all measure, it makes sense that the people in charge of the good guys likely also have murky motives of their own. Of course, she’s not asking the others to work for free – she’ll give them the location of Oliver’s younger sister Claire, who is revealed to have been captured before Minoru joined them and also had Jet Eye powers. I… kind of wish this had been seeded into earlier books, as it really reads like a far-too-handy reveal here. The few action sequences that we do get are well-handled as always, and show off Minoru’s growing strategic thinking. Oddly, the one think missing here is romance – Yumiko is briefly seen to be annoyed that Minoru has had Suu to his house before, but Liquidizer’s relationship with Minoru rarely goes beyond allies, possibly as she spends a lot of it with a bullet wound.

I enjoyed this book despite it mostly feeling like putting pieces in place for next time. As for when next time is, shall we bet on 2022?

By Reki Kawahara and Shimeji. Released in Japan by ASCII Mediaworks. Released in North America by Yen On. Translated by Jenny McKeon.

This is the first time we’ve had a villain as the cover girl of this series, though it is not the Stinger of the subtitle, who we never quite get a good look at and may not even be completely human. Instead it’s Liquidizer, who was the evil mentor to our hero’s evil counterpart Trancer in the third book. Both of them have major roles in the fourth book as well, which seems designed to show that it’s not merely a case of Good Guys vs. Bad Guys here. This is, frankly, much appreciated, as whenever Kawahara tries to show off how evil his bad guys are the result is never all that good. I’m all for nuance if it keeps us away from mad ranting and rape threats. Even better, as Minoru’s overall psyche improves so does the series. He angsts here, yes, but far less than the previous books. There are even good things happening! Overall, it pleases me, as it means that, while not a book filled with happiness and sunshine, The Isolator is no longer a depressing slog. 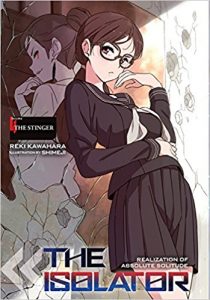 We pick up right where we left off (like Accel World, Isolator is not really interested in down time), right after the last big battle with Trancer and Liquidizer. Minoru is jogging around, awkwardly chatting with his high school friend Tomomi (who may have lost her memories of their traumatic battle, but still has a giant crush on him), and getting some New Year’s mochi, which he shares with the Professor. If you think this may sound a bit like a harem protagonist, you’re not wrong, but Minoru’s Charlie Brown-ish sort of personality keeps things from getting too cliched. At the same time, Trancer and Liquidizer are licking their wounds and talking about what to do next. We get this from Trancer’s viewpoint, and also get a bit of his backstory, as he has a frozen childhood friend in a warehouse that he’s sort of hoping the Ruby Eyes can fix, even though she’s pretty dead. You get the sense that the choice between “jet eyes” and “ruby eyes” may be purely arbitrary.

The main problem – for both groups – arises with The Stinger (another lame Jet Eyes code name), whose gender and appearance is unknown but who can apparently do absolutely anything with insects, including gruesomely killing several soldiers and civilians, and trying to kill both Minoru AND Trancer. The most interesting thing about this half of the book is seeing Trancer’s hatred and self-loathing get the better of him, as he becomes convinced that this is an assassin sent by his organization because he failed them. This leads to a wonderful heartwarming moment, which is all the more amazing given it’s Kawahara writing villainous depth, where Liquidizer shows she does, in fact, care about Trancer’s well-being. It all leads to a cliffhanger, and who knows where we’ll go from here, but it’s a wonderful thing to see.

There are other things going on I didn’t talk about much, such as whether Minoru’s shell can heal the comatose and possibly have a connection with his sister in heaven (I’m winning to bet “no” on that second one), but I’ll save that for the next book, which may come out in 2020 given the author’s other projects. Still, this was probably the best book in the series, and Minoru proves to be an excellent protagonist when he’s not moping. Worth the wait.