By Keiso and Kureta. Released in Japan by Dengeki no Shin Bungei. Released in North America by Yen On. Translated by David Musto.

I almost didn’t get this. It ticked off quite a few boxes in terms of “things I’m not interested in”, was very long, and looked like it would consist of one big fight. Most of those things are true, but I will admit that the book definitely picks up as it goes along, especially in the second half. It suffers from having a sprawling cast, each of which have to get their own introductory chapter to show off why they’re here and why they’re really pretty strong. Unfortunately, this means that it feels like we’re reading 16 prologues at times. In the back half things get much better, the fights are indeed very cool, and there are some surprisingly touching moments. I enjoyed reading it, in the end. That said, I’m pretty sure that this will be the only volume I read because, no matter how well it tries to hide it, this series is going to come down to two genres that I really cannot stand. It’s both a tournament arc AND a survival game. 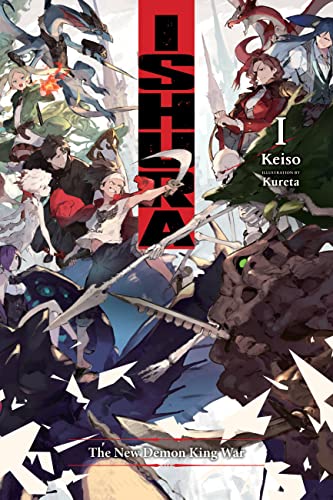 This world we’re introduced to seems to have everything. There’s wyverns AND dragons. There’s various kinds of magic. There’s walking skeletons and walking mandrakes, both super powerful. And there’s isekai’d Japanese folks, though for once they’re just part of the cast pile – we learn nothing about who they were or why they ended up here. The first half of the book sets up for a war between the main city Aureatia, which is run pretty much by humans – called “mitia” here – and Lithia, a city that has split off, with its ruler declaring herself the new Demon Lord. That title is a bit taboo these days, especially after the appearance of the True Demon Lord. In the second half of the book, the war begins and we see who lives, who dies, and who gets tragic backstory and THEN dies.

As you’d expect with a book like this, some character arcs work better than others. My favorite was Kia, a young, seemingly blase elf girl with the power to control absolutely anything with her words. At first she almost comes across as a bargain-basement tsundere, but as the book goes on and she learns about how the world works – and what her powers can do – she suddenly gains morals and ethics, much to the horror of her teacher, an assassin named Elea who is trying to murder anyone who discovers Kia’s secret. I also enjoyed the touching relationship between Regnejee, a battle-hardened wyvern who is a little battle-hungry, and Curte, a blind woman who lives in a tower and marvels at everything Regnejee says… or at least that’s how it looks at first.

I could go on, I’m sure. There’s something for everyone here, and I liked the use of names and titles, which reminded me quite a bit of Katanagatari. As a fantasy series with a high body count, it’s a real winner. It’s just not my thing.