i will cook with my fluffy friends

I always appreciate it when a series takes the effort to do convincing setup… well, convincing enough. This is still a reincarnated as an otome game villainess series, so I’m not asking for 100% realism, or even a thing I haven’t seen before. But you want the book to be interesting enough that you will say “yes, I will add this to my stack of villainess novels to follow”, and that’s there Fluffy Friends delivers. (If you think I’m typing out that full title again, you’re crazy.) It’s definitely a series in things for the long haul – we don’t even get to cooking with the fluffy friends till halfway through the book, and by the end of the book she still doesn’t know her husband’s big secret. But it sets out its worldbuilding, it explains why Laetitia is the way she is and why everyone thought she was evil, and her life does not magically get super easy after the memories come back. 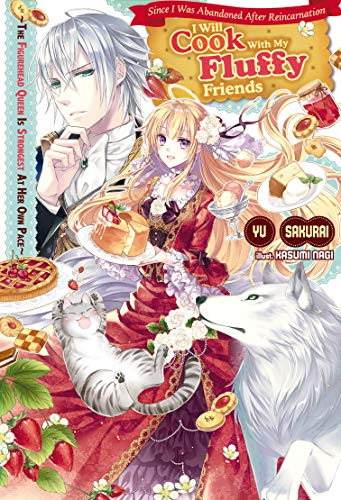 When we first meet Laetitia,. she’s been shoved into a fountain by her fiancee, and things don’t get better from there. Despite making perfectly rational explanations for her behavior, everyone seems to be hating her and loving the other girl who’s accusing her of bullying. And so our heroine decides to simply retreat, and her father (who is 100% in her corner) arranges for her to marry the king of a nearby area, who has a reputation for hating women but needs a figurehead queen to fend off fiancees. That’s fine with Laetitia, who, now that she can recall her past life, wants to start doing what she did while in Japan: cook! That said, the cooking may also get her in trouble, as her new home not only is home to a combination of humans and beastkin, but they are at political loggerheads with each other, and even a chiffon cake can be a lethal weapon.

First off, I said “otome game villainess” was the arc, but there’s no game involved here – this isn’t a thing the heroine played in Japan or anything. That said, the way that her memories of her former life and her current life mesh together is possibly the smoothest we’ve ever seen it in these sorts of books. Laetitia does not suddenly have a different personality, nor does she have to deal with confusing new customs. Instead, it’s as if her Japanese life was unconsciously with her all along, and now she can access it. She’s also pretty overpowered for a book like this – she lacks the ability to automatically make everyone fall in love with her that a lot of these type of heroines do, but that’s OK, as she’s smart, powerful at magic, and very good at political mindgames. And, of course, there’s the relationship with her new husband, which is still mostly hypothetical here, but it’s clear that he’s going to be falling for her first.

This is mostly a serious minded slow-life romance, with the one bit of great humor coming when Laetitia’s father has to explain to her how she, like he, has a complete inability to fake a smile and just looks evil. Still, Laetitia is a terrific character, and there are a few others I found more interesting than I expected, such as Natalie, one of the king’s four marriage candidates. I realize that the pile of villainess titles to read is getting pretty high, but you should be adding this one to the stack.