how to melt the ice queen's heart

By Kakeru Takamine and Ichigo Kagawa. Released in Japan as “Kouri no Reijou no Tokashi Kata” by Monster Bunko. Released in North America by Tentai Books. Translated by Alejandro de Vicente Suárez and Noor Hamadan.

We’ve discussed this before. In order to make the male lead of a romance – be it light novel, manga or game – appeal to the average reader who is basically plastering their face on his, they must have as few defining traits as possible. They should have middling to lower grades – but not actually failing – and either be average at sports or avoid them altogether. They tend to be members of the Go Home Club, unless of course the romance in question involves a club, which it usually does. This is all very well and good, but it always leads to the question: what on Earth does she see in him? In fact, “they”, because usually these sorts of books have multiple girls all falling for the hero. Fortunately, How to Melt the Ice Queen’s Heart, in addition to avoiding most of these pitfalls, has an excellent answer as to what she sees in him and why her heart melts: HE CAN COOK. 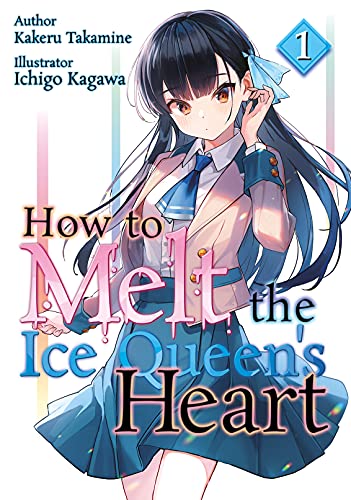 Asahi is a young man who is somewhat reserved, not really prone to sarcasm or cynicism, and his biggest problem seems to be dealing with his best friend and his best friend’s girlfriend – who are both very loud, energetic, and flirty with each other. He doesn’t pay much attention to his classmate Fuyuka, a stoic young woman who is the Ice Queen of the title – she avoids interpersonal relationships. One day, when she does not show up for school, he finds that not only does she live next door to him in the apartment complex, but she’s also suffering from a bad cold and high fever. Initially throwing off all attempts at his help, she finally gives in after passing out in the hallway. After he cares for her and makes her food to feel better, she tries to pay him back, at first with plain old cash (he refuses), then by helping him study. From here, romance blossoms.

There’s not really a great deal to this book beyond the romance – it is here for one thing and that is seeing these two nice kids slowly start to fall for each other. Naturally, Fuyuka’s ice queen reserve is more “socially awkward” than anything else, though she seems to have a tragic past. Asahi does not have a tragic past per se, but he does have two “famous” parents and their restaurant, which is the main reason he’s living by himself. The two mostly bond through cooking lessons (him) and study lessons (her), and we also get a sports festival which involves a prize which traditionally is given to the person you love, trying to hide your not-quite-relationship from the two Worst Best Friends out there, and how to negotiate a night out on Christmas Eve when it’s spent at a restaurant not only run by Asahi’s parents but literally named and themed after him.

It’s sweet. It’s heartwarming. It’s got virtually zero drama or wacky comedy shenanigans – there’s not even any fanservice! It is a light novel you could happily introduce to your parents – though beware if your parents are as goofy as Asahi’s. I liked this a lot.