housekeeping mage from another world

By You Fuguruma and Nama. Released in Japan as “Kasei Madoushi no Isekai Seikatsu: Boukenchuu no Kasei Fugyou Uketamawarimasu!” by Ichijinsha Bunko Iris NEO. Released in North America by J-Novel Heart. Translated by Hengtee Lim.

I remember thinking after finishing the first volume of Housekeeping Mage that it was a lot darker than I had really expected. But I noted in my review that the story did its level best to try to have the trauma and abuse of our heroine be in the past so that it could be a cute romantic novel. That said… there is still the past trauma and abuse, and that comes to the fore here in the second volume, where we go into more detail about Shiori’s struggles after being isekai’d to this world (we still don’t know the reason) and we go into much greater detail about her time with her previous party, who were all such good kids… AT FIRST. And, well, bad things happen to her here as well. It’s just volume 2, so I’m OK with this, and it’s quite well written. I do hope we’ve sort of turned a corner, though. It can be cathartic but also exhausting to read. 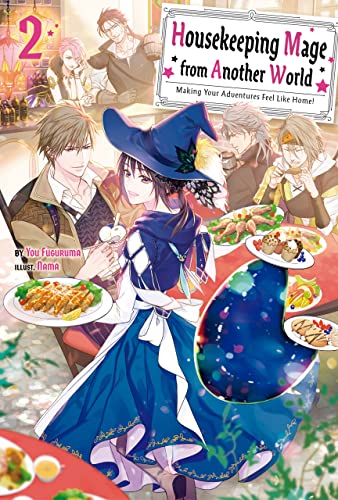 As Alec and Shiori return from visiting Rurii’s family, they are beset upon by a snow wolf. And then, later on, three snow wolves. This is very unusual, they tend not to attack humans without a reason. They then arrive at a nearby village and find the reason, which leads to a huge battle between 60-70 wolves and only a few knights and adventurers. Unfortunately, during this, Shiori is badly injured, and this triggers memories of her past adventure party, to the point where she’s almost delirious with fear that Alec will abandon her. From this we also learn about how her party self-destructed so badly, and who was the mastermind behind it. Oh yes, there’s also a torture brothel involved. That said, this *is* still a romance, and by the end of the book Alec and Shiori are essentially a couple, and resolving to reveal to each other their secret backstories.

I am slightly optimistic that the worst of this is behind us, mostly because the narrative makes it textually clear. By the end of the main story, Shiori’s old diary detailing her travails since arriving in this world up to her abandonment has been burned, and the records showing exactly who was behind everything and why have also been burned, thus literally allowing her to start over fresh. Not admittedly there’s still Alec’s past, which is also touched upon here, and we also don’t know the reason she’s even here at all. But the summary of the next volume, while it implies bad things will be happening, at least says they’ll be fresh new bad things. And the romance between Alec and Shiori really is sweet. I could have done without the brothel subplot entirely, though, to be fair, which mostly seems to be there to show off what a bad guy the bad guy was.

So yes, I’m going to be reading more. I like the leads, I like Shiori’s slime, I like the supporting cast who aren’t evil, and honestly the ones who were evil are all dead now. Let’s hopefully move on.

By You Fuguruma and Nama. Released in Japan as “Kasei Madoushi no Isekai Seikatsu: Boukenchuu no Kasei Fugyou Uketamawarimasu!” by Ichijinsha Bunko Iris NEO. Released in North America by J-Novel Heart. Translated by Elanor Sakamoto.

Sometimes, when you have a story you want to tell, you have to remember to tell it and not get distracted by other things. Indeed, sometimes the other things are completely unnecessary. You want to have an isekai with a love story between your heroine and a handsome adventurer, but urgh, isekai. That means you have to do the whole “why have you been summoned here/level up” stuff. But… do you NEED to have all that? As for your heroine, there’s a long sequence where she gets involved with the wrong party and is slowly ground down until she’s damn near suicidal. It’s needed setup for the romance to come… but do you NEED to have all that? Flashbacks are your friends! By jettisoning its tragic backstory to the very start of the book and keeping it in flashback, and by having the isekai be reduced to “it just happened, no reason”, the author of Housekeeping Mage is able to focus on telling the story they want. And that’s a good thing. 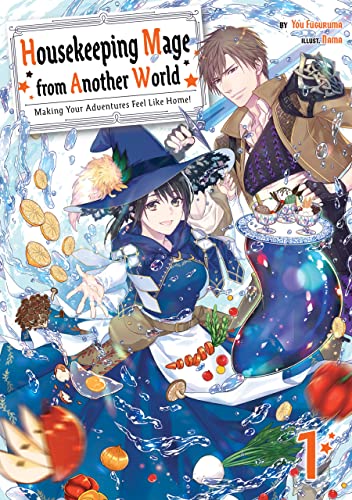 After a brief “I’m walking home from my grueling office lady job oh hey, isekai whooooosh” prologue, we meet our hero, Alec, an adventurer who’s just gotten back from a long job away from the capital. This means he has not met the capital’s new adventurer Shiori, whose magic power is minimal but who makes up for it in brilliant technique. No one is sure how she ended up there, at first unable to even speak their language. However, they know that when they take her on a multi-day quest, they get hot meals, hot baths, and reasonably soft beds, plus laundry service. Alec is, frankly, smitten pretty fast. There’s just one problem. Shiori was with a party previously who treated her like… well, like a maid, and drained her of her will to live… then abandoned her in a dungeon when forced to by greedy nobles. Frankly, Shiori has PTSD. But Alec, who has his own secret past and his own tragic backstory, wants to get to know her better anyway.

The book tries very hard to not have this be “Magical Maid”, to the point where her first party that does treat her like that are held up as the scum of the earth. (I was expecting to meet them towards the end of the book, but no, though they may show up later.) The rest of our main cast are quick to emphasize not only that what Shiori’s doing is a huge mental and physical help to adventurers, but also that it requires a fine technique that few mages possess – her mixing of different spells works for her because she DOESN’T have huge amounts of mana, those with more would likely be unable to do it. And later on she saves the day with both housekeeping knowledge AND knowledge from Japan. That said… Shiori is pretty broken in this first book. Alec realizes that, I think, and pursues her firmly but slowly, waiting for her to start to open up to him. Which she does, eventually.

There’s more of this in Japan, though as of this review the second book hasn’t begun on J-NC’s site. If you enjoy isekai written for women, or shoujo romance, this is a definite must read. It doesn’t skip the boring bits per se, but they’re shuffled to the side or left for dessert.