It’s rare that you suspect that an author feels that his series has too many readers, but that seems to be the case with Fushi no Kami, which is really going to be pushing the limits of reader tolerance here in just how much the cast can praise every single thing Ash does. It really is ridiculous, and that’s not even counting Maika and Arthur, who are in love with Ash, or the maid that he gains in this book, who clearly is also falling in love with Ash. Now, to be fair, in their eyes Ash is this weird combination of Thomas Edison, Abraham Lincoln, and God, so I suppose it is perfectly reasonable in some ways. Adn yes, Ash is trying to bring back many of the ancient civilization’s conveniences, as well as ruthlessly fending off assassination attempts. Still, I would love it if in future books he gets a complete failure or two under his belt. 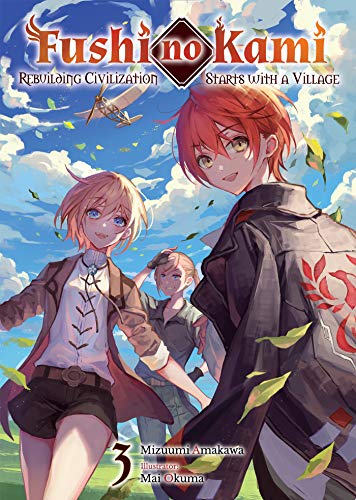 We start off with Ash finding a new outlet for his creativity, and this time he isn’t alone. Fellow study group friend Hermes turns out to have an obsession with planes, and has built a model that is being made fun of by the local bullies. Naturally, Ash is over the moon about this, and decides to help him build, if not a full-sized passenger plane, at least a working model. Ash is also getting rewarded, as he gets a medal for taking out the demon monster in the previous book… which promptly gets stolen, leading a vengeful Maika to do some investigating. In the most serious story in the book, some spies have been snooping around from the capital city, and they are looking for a girl. Given this is happening at the same time as Ash’s class is doing survival training, he has to protect said girl while also drawing away the spies turned assassins who have been ordered to kill her. Which… sounds like a fairly sedate book for Ash, given the previous two.

Frustratingly, we still don’t quite get all of Arthur’s backstory here, but we get enough to know why they have to unfortunately return to the capital, though I’m sure we’ll be seeing them again in the future. Much is made near the end of their rivalry with Maika, and I agree they share wonderful moments of closeness, but let’s face it, Maika is going to be married to Ash eventually, he just doesn’t know it yet. I would not necessarily call her a yandere, as she doesn’t really fit the criteria, but she’s certainly obsessed with Ash to the point where it’s almost disturbing, and moves heaven and earth to make sure that he stays by her side for future books. The book’s chapter titles all deal with planes, which makes it a bit frustrating that we only get proper plane building in the first section – I hope they return to this again. More to the point, the cast have now graduated and are essentially adults… how much more can Ash actually pull off now?

As noted, these books require a lot of patience in terms of the cast calling Ash the greatest thing since sliced bread. There’s also what amounts to a torture scene about 3/4 through the book, and the fact that Ash does not realize what he’s doing does not really make it any less (deliberately) creepy. That said, Fushi no Kami remains resolutely readable, which is one of the best qualities in a book.

Not to spoil or anything, but around 4/5 of the way through this second volume, a demon monster shows up. It startled me, as the entire book before this had essentially been ‘let’s learn how to make fertilizer’ and ‘tomatoes are awesome!’. What I said when reviewing the first book goes double for this one: it’s a slow life book where the slow life is running at top speed. Indeed, the inability of anyone to stop Ash and his ideas becomes a running gag. But then ‘rebuilding civilization’ is in the title, and it can’t be denied that Ash’s ideas are very good. So the demon monster, just like the bear from the first book, is there to give Ash a chance to be a more typical hero, one that can fight against huge antagonists rather than simply be an intellectual. It’s a good fight, too. That said, I think I like Ash casually tipping over all preconceptions of what society is like a bit better than stabbing a creature through the eye. 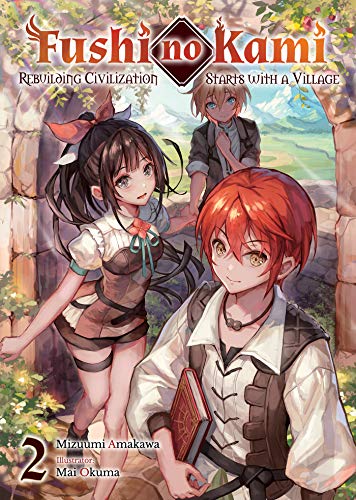 Ash and Maika have arrived at the nearest city to continue their educations. It’s not the grandest city in the world… Ash is unimpressed. But it’s certainly got more books than his village had, and maybe here he can learn to make better fertilizer. His roommate is Arthur, a noble who is actually a girl disguising herself as a boy. Ash, sensing tragic backstory, doesn’t let on he’s guessed this and merely gives Arthur space every morning and evening. They’re theoretically there to learn reading adn writing, but both know how already, so instead Maika works on her martial arts and swordsmanship, and Ash works on overthrowing all common sense. He makes liquid soap… which turns out to be illegal, but eh. Semantics. He grows delicious tomatoes… which everyone thinks are poisonous, and he has to research why. Can he drag this city kicking and screaming into the modern world? And can Maika ever get through to Ash that she’s in love with him?

As with the first volume, the POV here alternates between Ash and various other characters to show both things happening when he’s not around/unconscious, or to show how others react to his eccentricities. Maika is the most interesting of these, as it’s become clear that her love for Ash is burgeoning on obsession, as she talks about making sure she’s worthy to stand at his side. Honestly, there’s a very messianic quality about Ash in general, not helped by the author’s afterwords supposedly being written years later showing us Fushi no Kami as a “history textbook”. The other main character introduced here is Arthur, and I was rather surprised that we only got a few hints of their rather unhappy life to date, and don’t get into the reason for the disguise. Arthur is mostly miserable, meaning their fake smiles piss Maika off, and seeing the three of them bond is the heartwarming part of the book.

Ash may not have magic swords or fireballs, but in his own way he’s just as OP as other isekai heroes. How much you enjoy this book might depend on how much you can tolerate everyone worshiping the ground he walks on. That said, it’s a very readable book, and you never feel bored, even when discussing things like “I need seaweed in order to take the next step in my plan”.

I always enjoy it when I’m pleasantly surprised by a new license. The description of this did not seem promising – it read like “what about Ascendance of a Bookworm, only with a young boy?”. It also gets off to a bit of a slow start, though I will admit I was immediately taken in with the discussion of ancient writing types. As it goes along and picks up speed, though, this becomes excellent, with a young protagonist who has knowledge from a past life, manages to do wonderful things and save his village, and yet never feels overpowered at all. It helps that this lacks all the usual tropes of the genre – there are no dungeons, or guilds, and Ash has no magical powers or swords. Heck, even his knowledge from a former life isn’t all that helpful much of the time, as he’s not a botanist or chemist. But for this backwards village filled with exhausted farmers, he’s a breath of fresh air. 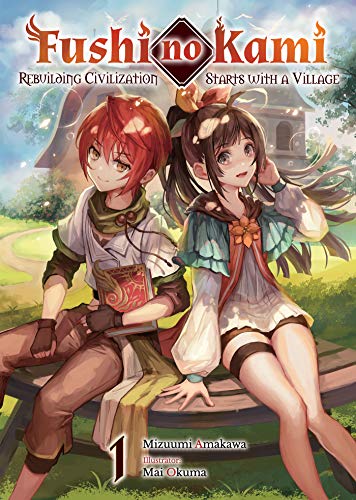 Ash has been reincarnated into this world, and retains his memories, but for the most part he’s spent the previous eight years pretending to be happy and content while being anything but. When we first meet him, he’s just had a major revelation, and bolts to the local church to beg to be able to read books – and also to be taught to read. It won’t be easy. The priest has been exiled and mostly given up. The village chief’s daughter dislikes those fake smiles of his. They’re all dirt poor. And there are mentions of demons out of the forest, though we never see one in this first volume. Fortunately, once he gets going, Ash proves absolutely impossible to stop, be it discovering aloe, learning about hunting and gathering, accidentally romancing the aforementioned chief’s daughter, and even fighting off a giant bear. But most of all: making life in the village better.

This book is not really slow enough to be a “slow life” title, but it has a bit of the same vibe. Ash may have memories of a previous life, but we never really hear all that much about it apart from a mention of nanotechnology in medical use… which is obviously not happening here. More to the point, with the exception of his romantic impulses, Ash feels like a kid more than a reincarnated adult (I’m looking at you, By the Grace of the Gods). The book is about 2/3 his POV, and the other third various people in his life, particularly Maika, who goes from the aloof chief’s daughter to being head over heels in love. (Ash sees her as a child, I think, which explains why he does not get the very obvious signs she is throwing at him.) All of the things Ash does improve life… somewhat. Things are a bit better. The highlight is the lack of deaths over the winter, a first for this remote village. It’s the sort of book that makes you smile.

It’s also not staying in the village – the ending indicates that Ash and Maika are going to the nearest city for the next volume, and I assume things will move onward and upward from there. In the meantime, this is recommended for fans of isekai who hate the usual RPG tropes that usually go with them.