from toxic classmate to girlfriend goals

In general these days, if you are in a classroom and you see a girl sitting next to you who either a) has a face that makes her look evil and threatening or b) a cool beauty who no one can approach, odds are that she is going to be an incredibly sweet girl who merely has tremendous communication issues. If you weren’t aware that this book is another in that type of series, you haven’t been paying attention to Tentai Books’ recent licenses, as they’re starting to have a niche in the “sugar sweet romance between weird boy and aloof girl” genre (though Seatmate Killer reversed those adjectives). If you are the sort who believe that good books need conflict, then this is not for you: there’s only one major conflict in the book. Instead, sit back and watch Koyuki be the world’s worst tsundere, and Naoya realize that, in fact, he does want to get closer to her. 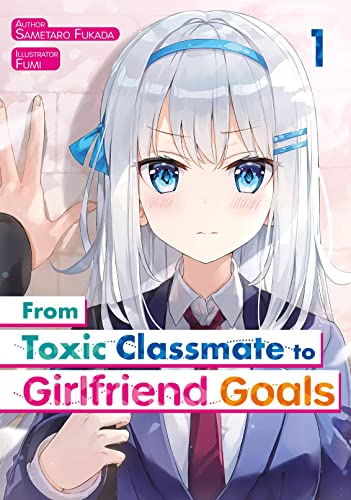 Naoya is a young man who has become an expert at reading people’s faces to figure out not only their emotional state but also their backstory, family connections, and what they’re thinking. He credits it to a family backstory that we get some of, but it’s hinted there’s a lot more to it than that. One day he runs across a creeper trying to pick up a young woman who clearly does not want his attention, and proceeds to verbally destroy him to get him to back off. Little does he know that this woman is Koyuki, legendary at their school for her callous words and cool attitude towards everyone. Except, now that he comes to really look at her, he realizes that all this is wrong and that she’;s just colossally bad at offering help or accepting thanks. Worse, she falls for him rapidly, and he is trying his hardest to avoid getting in a relationship. Will she be able to break down his walls?

A lot of the humor in this book for me came from, as I hinted, the lack of conflict. Throughout, we see things set up where they look like they might lead to some drama… but they don’t. Naoya may be reluctant to get into a romantic relationship, but once he realizes that’s where this is heading he doesn’t back off or try to change how he acts around Koyuki. We meet her sister, who’s trying to make sure that he’s good boyfriend material… and he passes easily. Then we meet his family, including an overprotective father… and he STILL passes easily. This actually makes it funny when we finally DO get to the drama in the volume… and it comes from him confessing to her too quickly, something she has (supposedly) spent the entire book trying to achieve. And when she finally gets what she wants? She has a total meltdown.

Not to worry, though, it works out. The author, in the afterword (and apparently also the publicity for the series) guarantees a happy ending. Which is good, because we have other books if we want drama. We have this if we want to see an incredibly dorky girl try to point at her boyfriend in a haughty way but fail because she’s simply too adorable to pull it off. Cute and sweet.