even dogs go to other worlds

When I got to the afterword of this first volume and the author revealed that the original idea for the book did not have the dog, I wanted to slap my forehead a bit, given that the dog is the only reason anyone would read this in the first place. Now, don’t get me wrong, it’s not bad. The characters are pleasant, the story is pleasant, the dog is pleasant, and it is a perfectly nice slow life book. It just… verges on boring, that’s all. And by verges I mean that we’ve pulled off the road into the Town of Boring and are booking three nights at the local motel. The second half, where you start to get a vague idea where the series may go, is slightly better. But this book suffers, as so many others do, with the curse of “slow life” books: in order to portray that accurately, you have to have nothing happen. 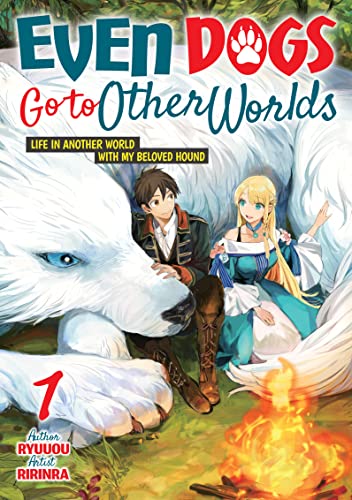 I’m not precisely sure if Takumi, our hero, dies from overwork or not – he just passes out and wakes up in the fantasy world. But he certainly fits the type, as we get the “I am an overworked corporate slave” intro before this happens. His only good thing in life is his pet Maltese. Now he’s in the middle of a forest, next to a monstrous Silver Fenrir… who apparently IS his Maltese, only she’s now the size of a car. Not sure where he is, he and his dog wander around till they hear a cry for help and end up killing an orc that was about to murder a young woman. Orcs! Is this a fantasy world, like all those novels talk about? Returning to civilization with the young woman, Takumi quickly finds himself out of his depth and having to get used to magic, monsters, and mayhem. Fortunately, he has a pupper. A big pupper.

I think I can sum up my feelings towards this book when Takumi and Claire (the young woman) arrive at her palatial estate, the smaller of her two estates, and meet up with her butler, who is named… Sebastian. Of course. This by now 50-year-old in-joke shows that everything in this book is going to be exactly on the nose, with surprises not on the menu. I did briefly hope that Takumi, who definitely fits the nickname “potato-kun” given to bland isekai protagonists, would be completely powerless and have to rely entirely on his dog, but no, he’s overrpowered too, in the “magical herbs” sort of way that we’ve seen in other slow life isekai series of this nature. Even the romance between him and Claire is predictable. She likes him. He likes her. They’re both shy. Will anything happen? Not in this book.

There are hints that we’ll get more plot development in the next book. And again, this book’s only fault is that it’s dull. The prose is fine, the translation reads great, it’s got dogs. But for me it’s another GC Novel to throw on my pile of GC Novels book I’ve tried and failed to enjoy.