By Daisuke Aizawa and Touzai. Released in Japan as “Kage no Jitsuryokusha ni Naritakute!” by Enterbrain. Released in North America by Yen On. Translated by Nathaniel Hiroshi Thrasher.

I think I am going to have to accept the fact that this is one of those series where I love everyone except the main character. This is not uncommon in Japanese anime and manga, of course. There are large numbers of people who can’t stand Naruto or Ichigo as characters, but love the series around them. Sword Art Online may be the best example of all. But at least all of those characters are actual heroes. A bit overpowered, a bit narrative-breaking, a bit dense, but heroes. Cid from The Eminence in Shadow is certainly overpowered, narrative-breaking, and dense. Though I think he’d get annoyed if called narrative-breaking, as he’s actually trying to create cool narratives for him to lurk in and be badass. There’s just one problem. He’s TOO annoying, even for a comedy. We’re meant to laugh at the dissonance between what he’s thinking/doing and what everyone else thinks of him, but I just sort of want him to go away, because honestly I quite enjoy this series otherwise. 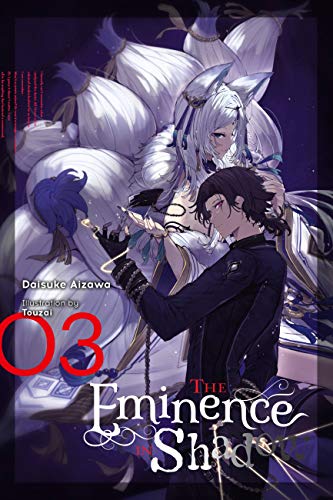 This book is divided into two halves. In the first, Cid is led by his sister to the Lawless Sector, which has a lot of bad guys and three major powers. She’s there to try to get Cid a place in the Knights, but he quickly wanders off to go be cool and shadowey. Unfortunately, as always, his chuuni declarations designed to sound ominous are actually coming true: in this case, they’re trying to resurrect a vampire queen and turn the town into corpses. In the second half of the book, he teams up with one of the major powers from the first part, a fox woman with a tragic past, in order to destroy the economy of two major companies… one of which is the company literally run by his own minions. To do this, he has to invent another identity so he can be his own bad guy, because honestly, the idea of doing this appeals to him far more than the impact it might have on anyone who cares for him. Our hero, ladies and gentlemen.

I suppose I should be grateful for small blessings: I hear that in the original webnovel, Cid was actually far more consciously evil about doing all this, whereas in this book most of the actions he takes in the second half of the book are just him not thinking things through or genuinely being a dumbass. But anyway, let me stop talking about Cid, as the rest of the cast are a lot of fun, and the book can be quite funny when it wants to be. Delta, who Cid thinks of as a giant Golden Retriever in the form of a woman, is possibly the only character denser than he is, and yet she’s a delight, because it’s innocent denseness. There are some strong dramatic turns here as well, believe it or not, both from Alpha and from Yukime, the fox woman Cid teams up with. And OK, the final gag with Cid digging a giant hole because he thinks he’s discovered some Mysterious Last Words is pretty funny.

So yes, I’ll definitely be reading more, but I just gotta prepare myself: Cid’s probably always going to be like this.

By Daisuke Aizawa and Touzai. Released in Japan as “Kage no Jitsuryokusha ni Naritakute!” by Enterbrain. Released in North America by Yen On. Translated by Nathaniel Hiroshi Thrasher.

I may have to eat my words again. Last time I said this is the sort of story that could only work as a comedy. But in this second volume, I’m finding that I’m more interested in the actual conspiracies and backstory than I am in Cid being goofy chuuni guy. I will admit this book is not as funny as the first one, though it has its moments that made me laugh out loud. But when it’s focusing on other characters, particularly Rose, the princess who gets put through the wringer in this book, it actually makes me wish that it could work as a real book. The key there, however, would be that it would have to have a cast that did not include Cid or his minions, and that’s not going to happen. And, to be fair, it would deprive us of that most shonen of cliches, the tournament arc, which Cid tries to game for his own amusement and mostly succeeds. 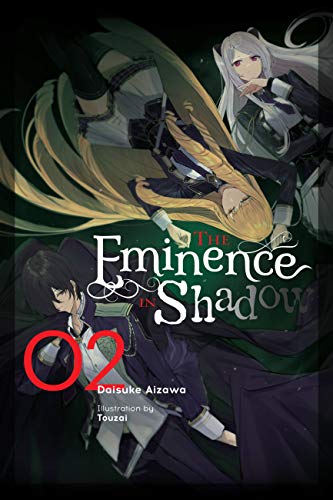 The book is essentially divided in half. The first part has Cid, invited by Alpha, headed to see an event where fighters try to call up ancient heroes and do battle with them. Most fail. That is, most fail to even call up ANY spirits. Naturally, Cid/Shadow ends up calling up one of the most deadly. There’s also a hidden conspiracy involving the Church, which frankly should not surprise anyone reading this book. After this he decides to enter the local tournament battle, which his sister is also competing in, as well as Princess Iris. Unfortunately, while this is happening Rose, another princess, is set to be married off to a man who is so evil that he’s named “Perv Asshat”. She tries to kill him, then flees, but we know that’s not going to work out. She’s going to have to sacrifice something…

The funny parts of the book usually involve Cid when he’s trying to be edgy, or when he’s reacting in surprise to something that he set up and forgot about. (There’s a running gag of him thinking he’s finally met another isekai’d person, only to find out it’s one of his minions just publishing stories he told from our world, or music he played. It’s a much funnier running gag than Cid always crassly saying he has to “hit the can” before vanishing to be Shadow.) I was also amused at the hate/hate relationship between Alexia, Cid’s tsundere from school, and “Natsume”, aka Beta, one of Cid’s minions. They really can’t stand each other, and it can be funny. That said, Rose’s plot is not played for laughs at all (OK, the tuna wrapper was funny), and while Perv Asshat may have a very stupid name, he’s clearly got the villain thing down pat, and unfortunately survives to fight in another book.

So it’s not quite as silly a comedy as the first book, but I find its skeleton more compelling than I did in the first. Fans should still enjoy it either way.

By Daisuke Aizawa and Touzai. Released in Japan as “Kage no Jitsuryokusha ni Naritakute!” by Enterbrain. Released in North America by Yen On. Translated by Kristi Fernandez.

The sort of story that The Eminence in Shadow tells is one that can only be a comedy. It can’t take itself seriously, because if it does, it’s going to be the worst thing ever. Everyone has seen those fanfictions where the author says “So this is the plot of the main series, only the main character is grey, and intelligent, and badass, and gets all the girls, and…” etc. Warning you now, this is that fanfiction. Perhaps minus the intelligent part. Cid is ridiculously overpowered, his ethics are distinctly sketchy (though occasionally he can muster some rage at true cruelty), and he not only has a battle army of multiple girls in love with him, but he also gets two other girls to fall for him in this book. Fortunately, this*is* a comedy. Cid’s reaction to everything, and the over the top responses of his minions, are what make this a fun, breezy read. Such is a good thing, because there’s another warning about this book: it’s a demon lord at a magical academy book in disguise. 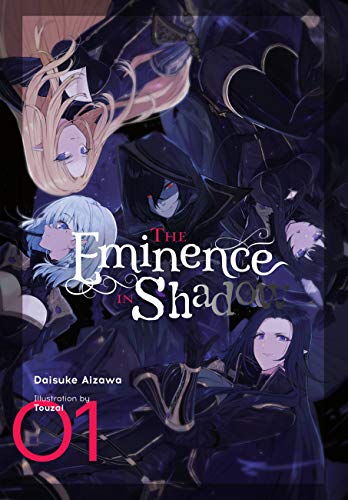 Oh yes, it’s a reincarnation isekai as well. We meet our hero in Japan, where he’s trying to grow stronger and stronger. His desire in life is to “control things from the shadows”, to be the sort of supervillain you see in Sailor Moon R. To that end, he does masses of ludicrous training, which ends with him smashing his head against a tree for hours and then, thoroughly concussed, wandering in front of a truck. It would be somewhat horrifying in any other context – there’s clearly something broken in him – but here it’s played as goofy. He ends up in another world as Cid, the son of a noble, but he hasn’t let go of his desires, and he’s stupidly strong and tough. He also gradually rescues a number of girls from fates worse than death, and because he only thinks in supervillain he names then Alpha, Beta, etc. After coming of age, he goes to the local magic academy, where he tries to be a “normie” – remember, the point of ruling from the shadows is that you aren’t conspicuous – but fails utterly.

As I said, after the first quarter of the book it essentially becomes a magical academy series, with Cid’s delusions of grandeur as a spice. The gimmick – which I haven’t mentioned yet, oddly enough – is that he’s made up complete garbage about a secret conspiracy to resurrect an ancient evil… and it all turns out to be true, only he is unaware of this, and assumes everyone around him is simply going along with his shtick. He meets a princess who he immediately realizes is a tsundere with a sharp tongue, because it fits her “trope”. Reality warps itself to match his fantasies, and as I said, that sounds awful but it works because he isn’t buying that for a moment. When he hears the villains have taken the school hostage, he’s over the moon that he can now go on a one-man assassination spree, but doesn’t think of it as genuine. Again, if you start to worry about his mental heath, the whole thing falls apart. It’s just a show, we should really just relax.

I’m not sure how this will hold up in the long run – titles like this get old fast – but this was a good first volume that should amuse anyone who enjoys “OP harem” series but doesn’t take them seriously.