This series, and really all series that star protagonists who start out as the strongest in the land and stay that way, has a basic problem: there’s really not a lot of places for their growth to occur. The titular dragon daddy has an advantage here over his daughter as he’s still learning about how humans (and indeed demons) react to things and what their value systems are. But Olivia… sigh. I love this series, but if it has a weak point it’s Olivia, who is the best kid and the most powerful kid and not much else. She can’t really start the drama. She can’t make mistakes. The most she can do here is to suggest that their quest for magical items amount to a summer visit to her friend’s houses, because no one has any idea where these items are. Fortunately, we do have a character in this book who screws up all the time and it a bit of a mess. She shines here. 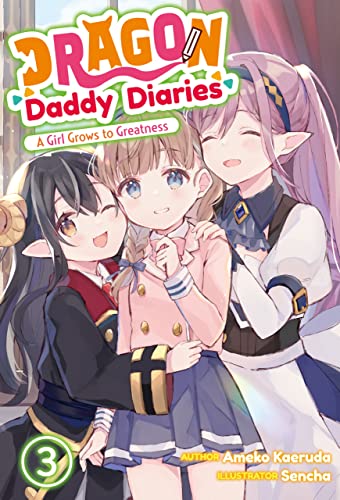 School’s out for summer, but the Queen has a project for Olivia and her father. There are several magic artifacts that need to be drained every 30 years or so, with the added bonus of granting a wish. Unfortunately, almost all of them have been missing for about a thousand years. They need to be found, despite no one knowing anything about them. So Olivia visits all her friends, and one by one she and her father see different sorts of miscommunication between parents and their children and teaching them a valuable lesson. It’s actually pretty heartwarming. Meanwhile, our resident Dark Queen is… sulking in her castle, wanting to hang out with everyone but also wanting to be a lazy shut-in. That said, she also has an idea where one of the magical googaws is… but it would involve returning to the demon realm and facing her comeuppance.

I’ve said before that I enjoy the wacky antics of Maredia and Clowria, but I enjoyed them even more here when things got more serious. OK, only a tiny bit more serious – we meet the rest of Maredia’s family, and it turns out they’re all chuuni NEET shut-ins just like her. But a lot of the behavior that she’s been trapped in a vicious cycle for was brought on by crushing expectations from the demon world, and she blames herself for failing them all. The trial that the ruler of the demon world must pass is in two stages, and the first is easy, as she elects to take it with her friends, two of whom are well-nigh indestructible. But the final test is her on her own, facing her worst fears. It can drive a person mad. Fortunately, Maredia is an old hand at screaming at herself in her own head.

As with the previous books, there’s no explicit yuri here, but I mean, Maredia and Clowria give each other rings, with Maredia even going down on one knee to do it. That’s near as dammit. I’m not sure when the next book in the series is coming out, but it’s likely the final one. I liked this a lot.

If the first volume of Dragon Daddy Diaries primarily revolved around the castle that is our heroes’ home base, then this volume is definitely set in the school. Indeed, we have to figure out excuses to get the rest of the cast to the school, and so our dragon daddy ends up being a security officer for the grounds, while Maredia and Clowria… well, sort of mooch around, but I suppose we can call them security as well. Basically what all this means is that the plot beats this volume all come from the school, and we don’t want to divide up the cast. It’s because we have a new main cast member, and she’s a welcome addition, even if she does, as Maredia notes, share a few character points with the Dark Queen herself. Luca is a new first year student, and she has a complicated backstory, a chip on her shoulder, and a desperate need for validation. 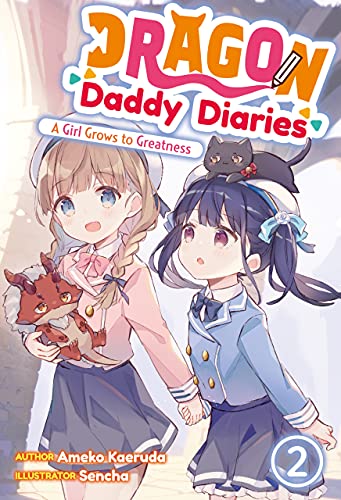 As for Olivia, she has managed to become a second year student, despite a huge amount of property damage to the school caused by her trying to learn beginner level spell and firing off advanced-level bursts. This means she’s now a sempai, and she tries to befriend her new roommate Luca, something that does not go very well for most of the book. Luca was supposed to be the King’s Student, a spot that Olivia has now taken, and thus Luca spends most of her school days challenging Olivia to various duels… and losing, because Olivia has been trained by a dragon and it shows. (That also comes out in this book, by the way, so everyone at last knows that he’s a dragon.) The other plotline going on is that they are searching for the Seven Supreme Hallows, powerful magical artifacts lost in the mists of time. In order to find them… a beach episode may be necessary.

As with the first volume, this series runs on tropes and sugar, and if you don’t like too much of either of them you may want to give this a miss. What character development there is comes mostly from Luca, though it is worth seeing Maredia manage to slowly emerge from her shut-in persona and begin to once again embrace her chuuni persona. Luca’s growth mostly stems from… parental neglect is the wrong term, but it’s a good lesson in why being too strict can sometimes have negative effects. When you’re never praised no matter how well you do, that bar can seem farther and father away. That said, I was a bit disappointed that the dragon having a chat with Luca’s mother was a speech done offscreen. Possibly as it would have interfered with the syrupy sweet mood. Even when battling an undersea turtle monster, the series doesn’t go much further than “he has a thorn in his paw”. Or in this case an ancient relic in his forehead.

This won’t make you count the days until the next volume comes out, but it’s a great read for a sunny day at the beach.

While reading this book, I was asked about it on Twitter, and I made the observation that it was like reading a parfait. Having now finished the book, I stand by this 100%. Everything about this is adorable and sweet, and you get the added bonus of a good example of how found families can end up being much better for someone than a birth family that resents and disparages them is. All that said, please be aware, this book is not here to be serious or to raise questions that require deep analysis. It cares not about power levels – all four leads are ludicrously more powerful than anyone else in the book. There is a bit of worldbuilding, but it’s about as important as any other ingredient you’d have in a parfait. This book is here for a dragon dad, usually in the form of a hot guy, and his adorable daughter, who he dotes on. 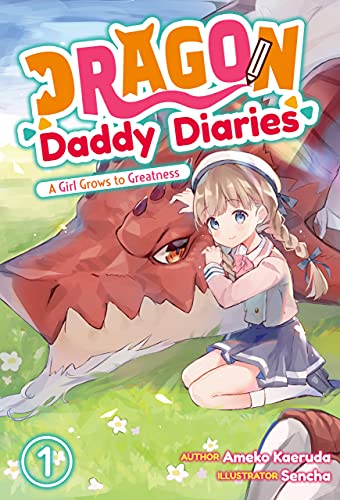 Our narrator is an elder dragon who has spent the last few hundred years high up a mountain. One day, a four-year-old girl shows up, calling him “Daddy”. He tries to dissuade her, but after discovering what her birth father is like, he makes the decision to raise her as a doting parent. He makes her delicious milk soup. He moves them to a large castle, perfect for a growing girl… though the Demon Lord and her partner who already live there might think differently. And he teaches her how to read, and the Demon Lord teaches her magic. By the time she’s old enough to go to school, she’s possibly the most powerful human being alive. But, I mean, that’s fine, really? As long as she can make friends, and hang out with her dragon daddy and her two lesbian aunts.

It’s a sign of Bunny Drop’s fandom presence that I feel the need to say this once more: this is not going there. Even if the daddy weren’t really a huge dragon, this is by the author of Sexiled, and we can be pretty sure that they’re not going to have this end with the girl marrying her dad. Speaking of Sexiled, in the afterword the author admits they wrote this to have fun with tropes: adorable girl who dotes on her dad, hunky dad who’s really a powerful dragon… and the Demon Lord and her partner, who (because this is entirely narrated from the POV of the dragon, who doesn’t get relationships) are clearly a couple but never explicitly called such. The Demon Lord is amusing in her own right, essentially being a shut-in with a tendency to talk big but fold like a card table, having to be bailed out by her knight/partner. The four of them end up being a wonderful and amusing family unit.

By the end of this first book Olivia (the daughter, sorry, names are hard) has already pretty much blown school out of the water… though she and her father elect to have her stay in her proper grade anyway, so she can better make friends. I expect even more ridiculous and sweet things will happen in the next book. If you love the author, or love found family, or just love sugary books, this is a winner.