I mentioned this in my review of the second volume, but it bears repeating: These two are a wonderful couple who absolutely should not get together at this point. Even the rest of the cast agrees with me. No one dares bring it up with Dahlia, who is still being treated with kid gloves, frankly (then again, it has only been a month since she was dumped by her fiance the day before her wedding), but everyone is planning for her business to be SO successful that she gets made a baroness, which would solve most of the issues with her marrying Volf. Not that she really has clued in to her own feelings yet. Volf has clued in to his own feelings, but his solution to the problem of class differences is terrible, as is fortunately pointed out to him by his older brother. Really, for the moment, they’re best as they are seen here: inventing new things, creating hilariously bad and terrifying magical swords, and eating and drinking a lot. A whole lot. 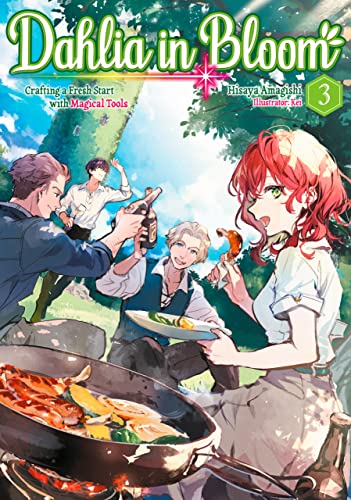 Much of this volume is spent with Dahlia trying to find a way to make the portable stove even smaller, so that it can be easily carried by knights when they go on their missions. We get into the nitty gritty of materials needed, cost, and how much to change – this book does not skimp on the business insights. That said, Dahlia is still showing off some painful naivete in this book. She’s trying to deal with the gossip about her and Volf, but it’s not something that you can just smile and hope it goes away. More concerning is the fact that she has so little self-worth that she gives away valuable creations at the drop of a hat, not realizing that she needs to convey a better idea of what she is as a proprietor rather than as a friend. As for Volf, well, his biggest concern is a monster that creates an illusion of a loved one – something Volf has never really had to deal with until now.

We already pretty much knew that Dahlia was having trouble dealing with the death of her father, and here we see that she’s also still having trouble dealing with her previous life in Japan, where she had a still living mother when she overworked herself to death. Honestly, she may have a similar fate here unless events conspire to get her and Volf together, as we see her lose track of the entire day working on another invention. She also says she plans to never get married, which is fine right now given that she and Volf are already acting like – and are mistaken for – a married couple. You can absolutely see where the rumors come from. The scene where they buy the matching glasses and amphora in order to have even better alcohol is really great, and shows that when they do manage to get past their own personal demons, they will be an amazing power couple.

But that’s for future Dahlia volumes. For now there is outside barbecue, a strong cider, and Dahlia’s vague feeling that she wants Volf to be by her side forever. Huh. Wonder what that’s about?

Last time I said readers should not be surprised if this romance series turned into romance in the next book. It turns out that it may take a bit longer than that. Both of our protagonists are suffering from the death of a beloved parent who was their whole world. Moreover, due to different circumstances, both of them are avoiding love at the moment. As a result, while to the eyes of the reader it might look like they’re basically dating at this point, it really is merely a series of dinners, with the occasional experimental magical sword crafting as a side dish. That said, by the end of the book I think Volf is starting to realize how he actually feels about this captivating young woman/drinking partner. As for Dahlia… well, it’s going to be a bit. Heck, we can’t even credit her break up as being responsible for her avoiding love, as it’s made clear in a side story here that Tobias was also not even on her radar. She’s just dense to love. As are they all. 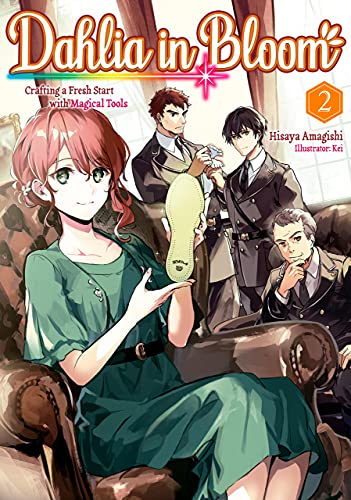 Fortunately for the reader, Tobias and his new bride are entirely absent from this book, which instead focuses on one major flaw that Dahlia has: she does not realize that her new inventions are stunningly revolutionary, rather than just off-the-cuff things that she can casually give out over drinks and dinner. This includes toe socks and insoles, something she suggests when hearing about Volf and his fellow knights having to battle in a swamp and constantly having issues with wet boots. As it turns out, Athlete’s Foot is a huge problem among the men in this world, and Dahlia’s creation – as well as advice she gives them based on experience from her past life – it enough to set up meetings with royalty. And let’s not even get into the magic bracelet she gives Volf that essentially allows him to leap tall buildings in a single bound. She really does not know her own strength as a craftswoman. Fortunately, everyone else does.

I joked on Twitter that the series was called “Dahliacoholic”, and it’s certainly true that pages and pages of this already very long book are devoted to her and Volf sitting around and having dinner and drinks and more drinks. Fortunately, she pretty much only does this around Volf, and he’s as bad as she is but also a gentleman. He also has a woman who he has an agreement with that they pretend to be lovers – for Volf it’s because he wants to avoid the adulation he tends to get walking around town, and for Altea because she appears to have been interested in his mother more than any man in her life. They both make good cover for each other. Which is good, as otherwise rumors about Volf and Dahlia would be rampant. She doesn’t quite have the social standing to be involved with a noble at the moment… but that may change if she keeps inventing at this speed.

I do think these books could stand to be shorter – like their main couple, they enjoy lingering over dinner and drinks and are in no rush to go home. That said, the mood of this book is excellent, and it manages to be a “slow life” that is actually slow, unlike a lot of those sorts of books.

Just as there are people who can read an isekai and somehow be surprised that our generic-looking male protagonist ends up with overpowered abilities and women falling all over him, there are presumably people who can be surprised that a romance novel has romance in it. To an extent, I get it. This book is supposedly about a woman, jilted by her fiancee on the day before their wedding, starting anew and devoting herself to her job. You can hear readers all over the world saying “Yeah! Kick ass in your profession, Dahlia! You don’t NEED romance!”. They are bound to be a tad annoyed that the majority of the rest of the book involves her meeting and going on not-dates with a knight whose tragic flaw is that he is simply TOO HANDSOME. That said… come on. This is a romance novel. It even has an extended makeover section where we get to see how gorgeous our mousey heroine really is once she gets the right clothes and makeup. If you accept that, it’s great. 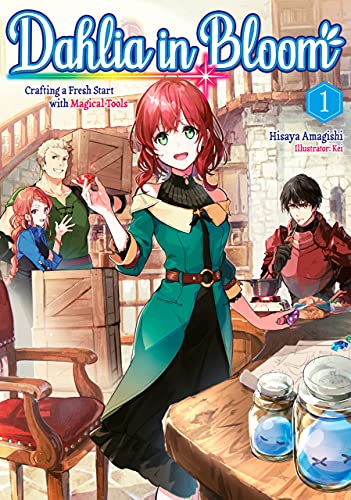 Dahlia is, by the way, a reincarnated Japanese woman who died at work from a heart attack, but her former life only really comes up in her job, as she’s more easily able to visualize magical tools due to her experience with hair dryers and Coleman stoves. She grows up in fantasy world with her dad, who also makes magical tools, and is engaged to his apprentice. Things go great (well, aside from her dad’s death) till the day before the marriage, when her fiance says he’s in love with another woman, so can they not get married? Oh, and he wants to keep the house they bought. She’s stunned, but not as devastated as she expected to be, and she gradually realizes she was never in love with him. She decides to throw all her energy into her business, helped along by most of the rest of the town, who are on her side. Then she meets Volf, the aforementioned knight with golden eyes who can’t walk through the town without starting a fight over him, and who can’t keep friends. Fortunately, both he and Dahlia are on the same wavelength, and both decide to forego romance and stay as drinking buddies. And boy, can they drink. But how long will this last?

Dahlia’s ex, Tobias, is almost cartoonishly awful, not actually evil but such a dimbulb who is lost in the thrall of puppy love that he loses any ability to think – as his older brother hammers into him near the end of the book. Your jaw drops at the callous shit he says to Dahlia, who has also been deliberately making herself dowdy so that other men won’t look at her. Needless to say, he barely recognizes the beautiful redhead she becomes. As for Dahlia herself, she’s great, and her work ethic really is a major part of the book, don’t worry. In fact, it might be a little TOO strong – she tells a story about an accident with black slime where she had to go get healed, and Volf realizes in horror she had melted her hands down to the bone without realizing it. I think we know why she may have overworked herself to death in Japan…

So yes, good book, but don’t be surprised when Dahlia and Volf decide they do love each other after all in the next volume or so. It is still genre fiction.