By Yui and Satsuki Sheena. Released in Japan as “Mushikaburi-hime” by Ichijinsha Bunko Iris NEO. Released in North America by J-Novel Club. Translated by Alyssa Niioka.

The second volume of Bibliophile Princess also consists of three stories, but the biggest (and best) takes up the first 2/3 of the book. Prince Chris has to go away on kingdom business for several days, and so Elianna will be representing him at a noble’s hunting-dancing-and-being-rich party. Naturally the party turns out to be a web of intrigue, from the expected (Elianna, despite being officially engaged to the Prince, is still not very popular with many young women, leading to a lot of catty remarks) to the dangerous (Elianna is almost killed by a runaway boar, knocked from her horse, threatened with violence by an assholish noble trying to mack on one of her new friends, and locked in a room with another noble in an attempt to besmirch her reputation). Fortunately, Elianna is able to get through it with a nice combination of book-learning, air-headedness, and a surprising amount of muscle. Takes strength to climb those library ladders searching for books, after all. 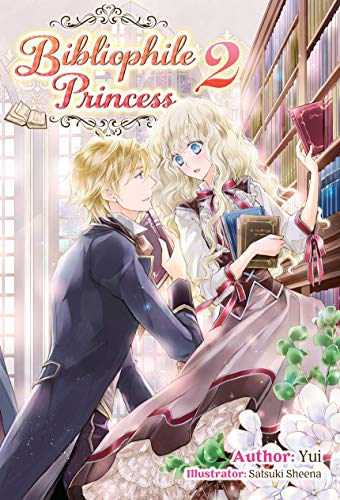 The author knows that Elianna’s personality is the main reason we’re reading the book, and shows it off nicely. That said, she grows in this book, not quite floating through every situation like a dandelion puff. Indeed, a lot of what goes on in this book could be a life lesson in “don’t be so naive and oblivious”, as is pointed out several times, especially by her cousin Lilia, who stomps through this book in a perpetual state of aggravation, which is great. When several young ladies snipe at her, she actually does get that they’re being insulting now, even if she chooses not to bother to respond. And she remains dedicated to her ideals – there is a subplot here involving the warlike nation they decided to give aide to in the last volume, and how a lot of people on both ides would feel more comfortable if the aid were military rather than otherwise. Elianna defends herself wonderfully, the only time she gets emotional in this book when it doesn’t involve books.

The other two stories are shorter and also less successful. Glen has fit into his role as the series whipping boy very easily, but it doesn’t mean I want to read a whole chapter about it. His company whine about why they have bad luck with women – just listening to them should tell you. That said, I will also admit (and this applies to the main story as well) that Prince Chris can be… a bit exhausting. Dial it back a bit, guy. There’s also a “is Elianna pregnant?” scene here that wouldn’t work if anyone took two seconds not to be mad and simply think about Elianna’s personality. The second story is another one that shows two people who are deeply in love with each other but don’t think that the other one is, leading to misadventures in a locked warehouse and Elianna getting to show off how she can still be terrifying in the right lighting and when covered in red dye.

Still, the first story is what sticks with you, and it’s excellent. I’m not sure if the next volume will have Elianna and Chris’ wedding – it’s in the spring, we’re told, but that’s still months away here – but I am hoping that the series will continue to have Elianna doing what she does best. And perhaps kicking a few more guys in the balls, too. That was fantastic.

By Yui and Satsuki Sheena. Released in Japan as “Mushikaburi-hime” by Ichijinsha Bunko Iris NEO. Released in North America by J-Novel Club. Translated by Alyssa Niioka.

The great thing about first-person narration is that not only is it a good way to get inside the head of the main character, but it can also be used to obfuscate, and even to fool the reader entirely. The Murder of Roger Ackroyd by Agatha Christie is probably the most classic example, but Japanese light novels are also filled with narrators who conceal and/or lie about their own thoughts. Fortunately, Elianna Bernstein is not that sort of narrator. No, instead her narration is sort of like a puffball, floating alongside events while missing the point of most of them. This is especially true of the first half of the book, when she tries to figure out why everyone is avoiding her – particularly her fiancee, the prince, who seems to be charmed by another woman. Now, it should come as no surprise to the reader that this proves not to be the case (indeed, so little surprise that I’m spoiling it here). But the journey it takes to get there is funny and sweet. 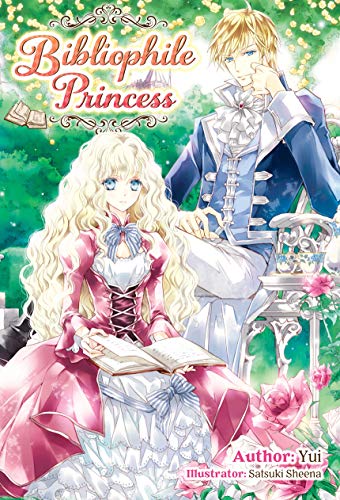 Elianna comes from a family of book-lovers – indeed, they’re famous for it, and their family are also knowledge brokers of a sort. She does not seem, at first, to be the same – indeed, it’s hard to get much of a sense of personality out of her beyond “loves to read”. She herself tells us about kids calling her “the library ghost” due to her pale complexion, and the current nickname of Bibliophile Princess is only a mild step up. Now she’s seeing her fiancee with another woman. This is it, right? The end of their engagement. Even if it means… shudder… giving back the book that Prince Christopher once gave to her. But is that what’s really going on? What’s more, is Elianna really just an insular book-loving heroine? Or is she actually changing the entire nation in many and varied ways… and then promptly forgetting about what she said as she’s moved on to her next book?

The book is in three parts. The first is Elianna’s narration of the “cheating” story, and reads like a standalone short story that an editor told her to expand into a novel. The second comes from other narrators, showing us other perspectives on Elianna, particularly the prince’s. Then we’re back to Elianna, mostly, for a third chunk which also reads like a short story, about a traveling book fair and its people. The first part was the most fun, but I think the last story was the strongest, as it gets into themes of racial prejudice and poverty, as well as seeing Elianna suddenly become an action heroine when she hears someone is about to burn a pile of books. It also shows Elianna gaining depth beyond the fun airhead we saw at the start – her uneasiness as she realizes that she can’t remember the first meeting between her and Chris is well handled.

Not only did the first chunk of the book read like a done-in-one short story, but the book feels like a standalone novel. Still, there are more novels in the series, and I’ll definitely want to read more. Elianna is fun to read, even if, as the author notes, when not reading a book she seems to look at people with a question mark over her head.

Also, Christopher, and particularly Prince Chris, reads terribly to me. I wish he’d been an Edward.