banished from the hero's party

As far as I can tell, this entire volume had one purpose: to make me feel guilty for calling Ruti terrifying over and over in my previous review. I mean, not to say that she still isn’t a bit much – waltzing past deathtraps that would have destroyed anyone else, taking the killer drug from the previous volume and having it only affect her slightly, and of course saving people when she runs across people who need saving… whether she wants to or not. Indeed, even her companion Tisse, who starts off the book sticking with Ruti seemingly because she’s being forced to, suspects that Ruti is going to turn on her beloved pet spider and kill it, which… isn’t actually true. (The spider’s name is Mister Crawly Wawly, which probably says a lot about Tisse, but let’s move past that.) But in the end, what this book is here to remind us is that behind her hero’s blessing, Ruti is a lonely young girl who HATES being the hero. 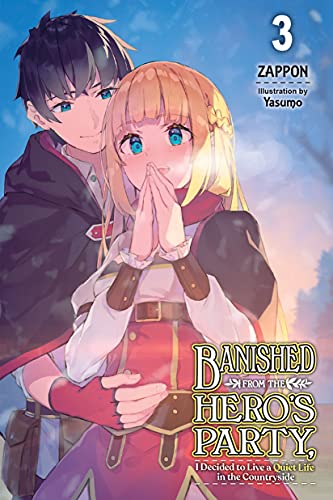 In fact, the majority of this volume, at least until the cliffhanger ending, is meant to undercut the previous two. After seeing Ruti as the stereotypical “yandere little sister” sort, she finally is told her brother and Rit are together, and… is not all that happy about it, but does not going on any killing sprees whatsoever. She arrives in town trying to get more of the drug that can kill her blessing, though it’s working pretty slowly so far. It *is* working, though – Ruti’s emotional range widens considerably throughout the book, which also helps to sell what she’s been forced to go through. After two volumes where a “slow life” start was followed by dark content and action scenes, this volume gives us slow life right to the end, with lots of Red and Rit being lovey dovey to each other, etc. Unfortunately, there is that ending… the rest of the hero’s party arrive in town.

I suspect the long term goal for Red and Rit might be figuring out a way to get rid of blessings entirely, though they may earn the ire of the church by doing so. They’re SUCH a liability in this world, with folks who are happy with them outnumber4ed in the narrative by folks who are not. Just as Ruti’s shy, introverted side is transformed by the hero blessing into an emotionless behemoth, so Tisse is an assassin because… well, if she doesn’t kill people, bad things will happen to her, so what choice does she have? (She levels up big time in this book as well, thanks mostly to her emotional support Mister Crawly Wawly.) Everyone is starting to question whether free will is an illusion or not, and this is a fantasy world where that questio9n is very much up in the air. That said, as long as Red is on the side of good they should be fine.

This volume was mostly all slow life, but I doubt the next book will be, as it looks like Ares is going to be having a huge fight with Red. Or Ruti. Or both. Till then,l this remains an excellent example of its genre.

The second volume of Gap Moe: The Light Novel. No, hear me out here. It’s nothing to do with any of the characters, but rather to do with the two moods of the book which are pulling on each other. the majority of the book is quite serious and rather dark. There’s drug addiction, beatings, child abuse, lots of death, demons possessing people, and, in the end, a cliffhanger which promises an absolute nightmare descending on Red and Rit in the third volume, especially if the Hero has as much of a brother complex as I suspect she does. And this is contrasted with the schmoopiest romance I’ve seen this side of SAO: Sugary Days. Rin and Rit are deeply in love with each other, have grown and matured enough to get past the self-deprecating or tsundere masks they’ve been hiding behind, and are here to be as sickeningly sweet as you can possibly imagine. It’s pretty great. 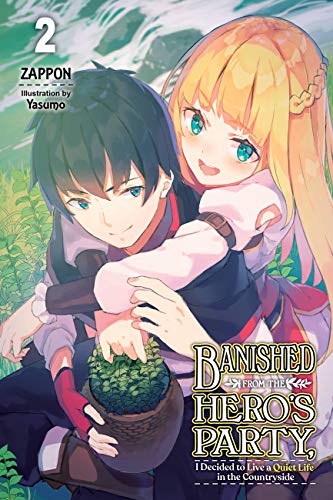 While Red and Rit go on a lakeside picnic, buy a double bed, and sit in each other’s laps a lot, other things threaten their bliss. Al, the kid from last volume with the weapon blessing, is still having trouble reconciling his feelings with his blessing. Then his parents are attacked by the kid who bullied him previously, who was supposed to have turned over a new lead. Could this be related to the new, highly addictive drug going around that changes your blessing for you? Could it be related to the ongoing class war that still infests the town? Or could it be related to the fact that the local slumlord kingpin has made a deal with a demon to rule the city? Oh yes, and the Hero’s Party continues to fall about without Gideon, Ares is desperate and pathetic, and Ruti gets even more terrifying by the page.

As you can see, the idea that this is Slow Life is hogwash… except that Rin and Rit are determined to make their own little world exactly that. They’ve got the apothecary, they’ve got the day-long dates, they’ve got still being too shy to even grope each other properly… really, I’m not exaggerating, it is SICKLY sweet. But that’s good, because without this the rest of the book would just be grim. And the grim stuff gets equally good attention. This town may be where Red and Rit have chosen to reside, but it’s an ugly little town. Albert, the creep knight from the last volume, shows up here and is even worse, and it’s darkly hilarious that the demon cannot fulfill his contract because this city is too lazy and halfassed to be properly conquered. As I said last time, my one complaint is that it really goes into ridiculous detail about its worldbuilding, the blessings in particular. And honestly, I’m well aware that for most readers my complaint is their high point.

So yes, this is an excellent light novel, and you should read it. And I really hope that Ruti does not kill Rit stone dead in the next book, as that would make the rest of the series rather short.

I probably should not have read this only a few weeks after Roll Over and Die, as the first thought that came to mind is that when the woman is leaving the party she’s branded, sold into slavery, and left for dead, but when it’s the guy he just moves to the country, opens a shop, and gets a girlfriend almost instantaneously. That said, the whole “you are a disgrace to the party, go!” plot is apparently also a big thing in Japanese webnovels now, though so far it’s been less “the party” and more “that one asshole guy in the party”. In any case, our hero starting up his apothecary and hooking up with his former ally is only part of the story here, as we also flash back to the party in action, get a few glimpses of life as the hero, and, perhaps most importantly, talk endlessly about the magical systems in place in this world. 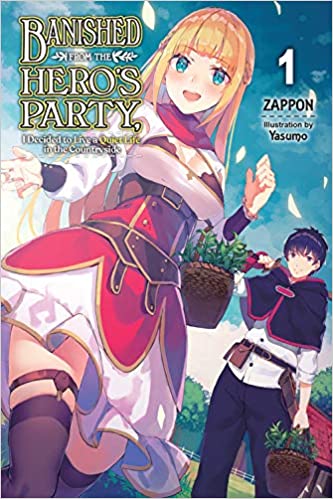 This is not a “game world” per se, but the plot hinges on a common game element: Gideon, the banished guy, was born at Level 30, and is the very definition of “the strong guy who joins your party early in the game to help you level up”. Unfortunately, when the party grows strong enough, this type of character usually leaves, and Gideon doesn’t do that – mostly as the Hero is his little sister. So when one of the party with a hate on for Gideon and a crush on the hero tells him he’s useless now, Gideon quietly accepts it, leaves the party, changes his name to Red, moves to a backwater sleepy town, and opens an apothecary. Luckily he’s helped in this by Rit, an adventurer and princess whose kingdom the hero’s party saved earlier. Rit has had a not-so-secret crush on Red since that time, and essentially invites herself into his shop, his home, and his bedroom. Together the two grow closer and have a nice quiet life. But what of the hero?

I’ll start off with the negatives: Red/Gideon is not the most magnetic hero. He fits the stock “boring adventurer guy” a little too well, and it feels ridiculous that he’s just quietly listen and leave the party without, y’know, asking anyone else in the party about it. There’s also a heaping helping of explanations about “blessings”, which are essentially the powers that people have, as well as the weak points that come with them. (Gideon, for example, cannot go past the Level 30 he was born with.) It’s interesting in regards to the ongoing story, but also tends to go on a bit too much. On the bright side, Rit is genuinely likeable. We get a large number of flashbacks showing her being a giant tsundere towards Gideon and everyone else, but now that she’s grown up and accepted her feelings, she’s quite fun and cheerful, and their romance is very sweet. Most importantly, though, are the last few pages. We learned very little about the little sister hero throughout the book except that she had something of a brother complex and was relatively emotionless. Towards the end we see the emotionlessness is a result of the many, many blessings she has, and that it has not been good for her mental health. I am definitely hoping to see more of her later on.

Overall, this does a good job trying to balance the “slow life” that its audience likely bought it for with actually having a plot and future character development. I do hope it has Red become a little less of the stock light novel hero in future books, though. But I’ll be reading more.