By Hitoma Iruma and Non. Released in Japan by Dengeki Bunko. Released in North America by Seven Seas. Translated by Molly Lee.

When I started this book, I had a very low bar I wanted it to clear, and to its credit, it did. I said on Twitter I was looking for Shimamura to be slightly more interesting and for Adachi to be slightly more gay. On one of those points, the book sails over the bar easily – Adachi’s freaking out about her love for Shimamura, what that says about her, what that says about Shimamura, trying to confess while also desperately hoping she is never found out, and (towards the end) realizing that yes, there is a physical desire in this love as well is probably the highlight of the book. As for Shimamura, sadly, she still narrates a large chunk of the book. She works best when around people more interesting than herself (i.e. the rest of the cast) and especially when she is dragged in an odd direction, which she just goes along with because she’s that sort of person. We saw this last time with the alien girl, and we see it here with her friend Nagafuji. 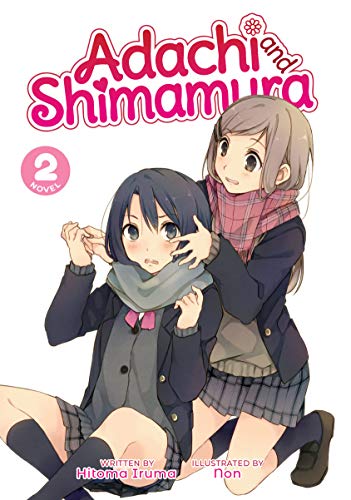 The book revolves around Christmas in Japan, meaning it’s a lover’s holiday, and also you eat fried chicken. Adachi, trying to convey her feelings without actually doing so, wants to invite Shimamura out to spend the day with her. The first third of the book or so has her working up the courage to do this. The second third splits our heroines into odd pairings – as I noted above, Shimamura and Nagafuji go to get a nice present for… well, for Adachi, but Shimamura, who is not completely clueless about what’s going on here, says it’s for her little sister. Meanwhile, Hino, the other half of “those two girls”, goes to the same mall with Adachi to help her get a present for Shimamura. In the final third, the two go on their not-date, have a relatively nice time, exchange presents, and Adachi tries to confess but doesn’t quite make it.

As with the last book, I think the strengths here lie in the unexpected making an appearance. In this book it’s the boomerang, a ridiculous present to give but also one that appeals highly to Shimamura, who falls in love with the image of Adachi throwing it. (Adachi isn’t wild about it, but it’s a present from the girl she likes, so it’s fantastic. She frames it on her wall. No, really.) I was also somewhat surprised that the book may be trying to pair the spares already, which given its tiny cast makes sense, I suppose. There are a few tiny scenes where you get the sense Hino and Nagafuji are also edging closer to each other, but again, they aren’t quite there. The entire book contrasts comfort (the same old thing every day) with danger (a risk of losing it all, but a big reward if successful. In the end, Adachi chooses to try to fall between the two poles, asking if Shimamura is not just her friend, but her BEST friend. Which, well, she is. For now, I guess Adachi will make do with that.

The flaws of this book are obvious: it still tends towards the dull and ordinary, and even the space alien girl is proving to be just another one of the cast now, hanging out with Shimamura’s younger sister. Oh yes, and there’s a jarring scene at the start when Shimamura, swimming at a fitness center, spots a creeper watching the little kids getting swimming lessons and saying “ew”. It’s meant to be slice of life, and I’m sure this does happen in Japan, but it felt out of place, and I wanted Shimamura to do something about him. Overall, though, if you liked the first book you should like the second. I do wonder how long it can string this out till Adachi finally confesses, though.

By Hitoma Iruma and Non. Released in Japan by Dengeki Bunko. Released in North America by Seven Seas. Translated by Molly Lee.

It is, to be honest, rare that a light novel catches me completely by surprise. For one thing, I tend to spoil myself as to what the content of a series is going to be. I thought I knew about this one. I knew it was an extremely popular yuri light novel series. I also knew it was supposed to be a bit boring. Both are true. The story begins with Adachi and Shimamura already knowing each other (though we get a later flashback to how they meet). They’re both delinquents who tend to cut class. Adachi, the black-haired girl, is seemingly stoic and unapproachable. Shimamura, who has dyed light brown hair, is more open and has more friends than the aloof Adachi, but also seems to have a disconnect when it comes to emotions. Seeing them flapping around in their interior monologue trying to connect is what’s meant to be the point of the book. That said, it doesn’t quite keep the reader’s attention. Then the girl in the spacesuit shows up… 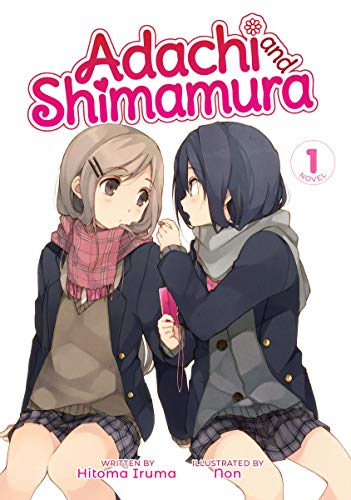 So yes, this is my own fault. I knew that the author of this series has written a large number of other series for both Dengeki Bunko and other publishers (including the Bloom Into You light novel spinoffs). I had also heard of the much older series Ground Control to Psychoelectric Girl (Denpa Onna to Seishun Otoko), but didn’t realize that it was also by this author. And that series has, as one of its supporting cast… a girl who dresses in a spacesuit and has seemingly supernatural powers. In the context of that other series, which stars another girl who says she is an alien, Yashiro as a mysterious maybe alien with supernatural abilities works fine. But when she shows up here and starts hanging out in what is, let’s face it, the cast of K-On! without the band, it’s quite jarring. Especially when she takes over the scenes she’s in… and proves to be more interesting than the two leads.

Let’s get back to the title characters. Three fifths of the book is narrated by Shimamura, and is the poorer for it. I’m not sure what the author is really trying to convey with her headspace. She seems to be pretending to be a normal, outgoing high school girl to hide her own inner lack of empathy and interest, but she’s too good at it externally and too bad at it internally, so it doesn’t quite come off. She’s the reason the book is seen as dull. When the narrative shifts to Adachi, things pick up a great deal, as she has the actual character conflict – she’s in love with Shimamura, something she starts the book off denying (in the classic “not in a gay way or anything!” sense) but accepts, at least to herself, by the end of the book. I think she’d have confessed to Shimamura on their “date” if Yashiro hadn’t ruined her chances. Hopefully future books will give Shimamura the chance to develop beyond “how do I connect to other humans” as well.

So I am very fifty-fifty about this book. The most interesting character in it is from another series. The narrator for most of the book struggles to connect with not only everyone around her but also the reader. On the other hand, Adachi’s inner monologue of panicked love epiphany was genuinely involving. I’ll be reading another volume, but so far it’s more Adachi than Shimamura for me.