By Reki Kawahara and Hima. Released in Japan by ASCII Mediaworks. Released in North America by Yen On. Translated by Jocelyne Allen.

Despite the cover (two of the three people on the cover don’t even show up in the book), there’s not a lot of wacky harem antics going on tin this volume, much to my relief. Instead, it’s the first Accel World to be composed of short stories – impressive given that by Book 10 Sword Art Online already had 2 volumes of short stories to its name. I also think that for those who saw the anime, this is the last volume with material that was used for it, as the middle story was broadly adapted into a couple of episodes, likely to give Kuroyukihime more to do. As with most short story volumes, quality here is variable, but there should be something for most Accel World fans here. A word of warning, though: if you like Accel World but hate Sword Art Online, this may not be the volume for you. 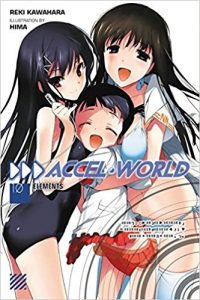 The first story here takes place sometime after the first volume, so we get to see a less experienced Haruyuki. Unfortunately, having made a beginner’s mistake when leveling up, he’s now in danger of being wiped out the next time he logs on. And so Takumu helps him out, saying that there is a “bodyguard” who can protect him till he gets enough points back to stand on his own again. The whole story seems like an excuse to introduce the bodyguard, Aqua Current, who is clearly one of Kuroyukihime’s old team, though it’s never explicitly stated. The second story is the best, mostly as it’s from Kuroyukihime’s perspective, as she’s on school vacation in Okinawa and finds, much to her surprise, that there are Burst Linkers even out here. The most interesting thing about this story is Kuroyukihime’s friend Megumi, who turns out to not quite be what she seems. The more I hear about the Brain Burst program the closer it gets to fantasy hand-waving, but I’ll let it go if it allows for cool and heartwarming scenes like these. I also liked the comparison of lost memories to a book you forget the beginning of.

The final story is the most well known, and possibly the most notorious – a crossover between Sword Art Online and Accel World, as Kirito is doing VR experiments and somehow ends up in the Accelerated World, where he confronts Silver Crow. Those who think that an armored suit that can fly would take out Kirito, a young man wearing a leather coat for armor, are doomed to disappointment – Kirito is still Kirito. Inevitably, we don’t really get to see who’s “better” per se, as the whole thing ends in a draw. Probably for the best, honestly. The author in the afterword tells us that he prefers if we think of SAO and AW as being two separate series, which tells me that the “Kuroyukihime is Kirito and Asuna’s daughter” theory might have hit Japan – given Kuroyukihime’s upbringing in AW< I think it's a terrible theory, but hey.

So three decent stories here, and next volume should take us back to the main plot, as well as take us back to cover art of Kuroyukihime wearing leather bustiers. Not that this cover was any less fanservicey. As always, Accel World is a lot of fun and impossible to read on public transportation.

By Reki Kawahara and Hima. Released in Japan by ASCII Mediaworks. Released in North America by Yen On. Translated by Jocelyne Allen.

And so, at last, we come to the end of the Armor of Catastrophe arc, which was not only deliberately meant to be a long arc but also grew out of the author’s control, as he’s admitted himself in the afterword. The volume gives us a lot of what readers like about this series: good battles with some nice analysis from Haruyuki, some amusing harem comedy, some heartwarming romance with Kuroyukihime, and an examination of the nature of negative emotions and how to cope with them every day, because they don’t just magically go away merely because everyone believes in you really hard. That said, it also has some things that fans tend to not like as well: Haruyuki is not only the bestest person to ever be possessed by the evil armor, but he’s a shining magical beacon of hope for all. Oh, and he gets another girl confessing to him, and is caught with her lying on top of him, because harem comedy. It’s a balance. 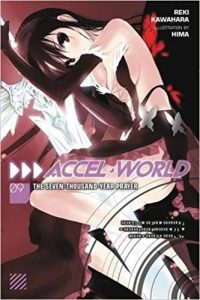 The significant development here is a bit of a spoiler, but worth talking about. We learn the true identity of Ash Roller, which turns out to be somewhat confusing, meshing up a tragic tale of an introverted girl and her comatose brother with the nature of the neurolinkers that are omnipresent in this world. It’s left deliberately up in the air what’s going on here, whether Rin is literally being possessed by her brother while in the Accelerated world, or if she’s merely taking on his role to an almost absurd extent. (She genuinely seems to be unaware of what transpires without wearing her brother’s neurolinker, so odds are on the first.) That said, I admit to a bit of irritation at the fact that one of Haru’s only male friends turns out to really be a shy young girl who’s in love with him in real life. (The shyness is conveyed via an odd speech pattern – Rin talks in sentence fragments, and it’s unclear if this is a mental issue like Utai’s or if it’s meant to be natural introversion.)

That said, once again after a lot of harem tease we are reminded that at the end of the day there is only one who is top of the heap, and it’s Kuroyukihime. We get a little more insight into her real-life background – she lives alone in a very rich neighborhood, and it’s implied that the murder of the Red King in the Accelerated World had a counterpart in real life as well. That said, just as Haruyuki is a Pillar of Hope for All despite his omnipresent self-hatred, Kuroyukihime tends towards the perfect accepting girlfriend much of the time, listening calmly as Haru pours out his fears, getting the crap beaten out of her in the AW waiting for him to overcome the Disaster, and bushing cutely when he’s accidentally proposing marriage to her without actually realizing it.

So in the end Accel World has much the same strengths and weaknesses as the author’s other series, Sword Art Online. Which means fans of one will enjoy the other, and those who hate Kirito with a passion probably will find themselves getting annoyed at Haruyuki here. The next book should be standalone and lighthearted, and I fear that may mean MAXIMUM HAREM ANTICS. We shall see.