SEAN: Oh the weather outside is frightful, but the manga is so delightful.

Airship has an early digital release of Berserk of Gluttony 2 and the print release of Adachi and Shimamura 4. 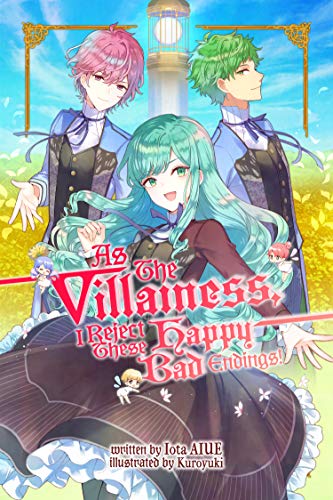 Cross Infinite World has a one-shot shoujo light novel, As The Villainess, I Reject These Happy-Bad Endings! (Watashi, Tensei Akuyaku Reijōnanode, Meribaendo wa Soshi sa Sete Itadakimasu!). You can probably guess the plot from the title. This also has material in it that was not in the Japanese volume.

J-Novel Club has two digital debuts. Are You Okay With a Slightly Older Girlfriend? (Choppiri Toshiue Demo Kanojo ni Shite Kuremasu ka?) is from GA Bunko, and is about a couple of high school kids who get together… then he finds she’s actually 12 years older than him. This… could be bad, to be honest, but Japan does love those age gap romances.

ASH: That is true; those stories have been around since at least the 11th century.

SEAN: The other debut just had an anime announced. My Friend’s Little Sister Has It In for Me! (Tomodachi no Imouto ga Ore ni dake Uzai) is also GA Bunko, which seems to have given J-Novel Club its non-fantasy romcom titles. A guy is constantly belittled by his friend’s sister. But, when he has to pretend to be the boyfriend of the daughter of his boss, will her real feelings come out? Erm… yeah, I’ll try this too, but these two debuts summarize badly.

Also from J-Novel Club, we get The Bloodline 2, Cooking with Wild Game 11, and Seirei Gensouki: Spirit Chronicles 13.

Kaiten Books has a new digital manga release, The Yakuza’s Guide to Babysitting (Kumichou Musume to Sewagakari). This runs in Micro Magazine’s Comic Ride. It seems like one of those “bruiser guy brought to heel by a tiny little girl” sorts of titles. Cute and funny, in other words.

SEAN: No print debuts for Kodansha, but we do get A Couple of Cuckoos 2, Knight of the Ice 5, Something’s Wrong with Us 5, and The Witch and the Beast 4.

MICHELLE: I need to get caught back up on Knight of the Ice!

ANNA: Me too, I really enjoy this series.

SEAN: Digitally, the debut is Boss’s Wife (Gokukon ~Chou Dekiai Yakuza to Keiyaku Kekkon!?~), which runs in Ane Friend. A girl with a huge debt runs into a former classmate… who turns out to be a yakuza. He’ll buy her debt if she becomes his bride. Can she be a Yakuza wife? Man, the summaries this week are just brutal.

MICHELLE: I swore I thought this one looked kind of fun, but this summary is making me rethink that assessment.

One Peace has a 12th volume of Hinamatsuri. 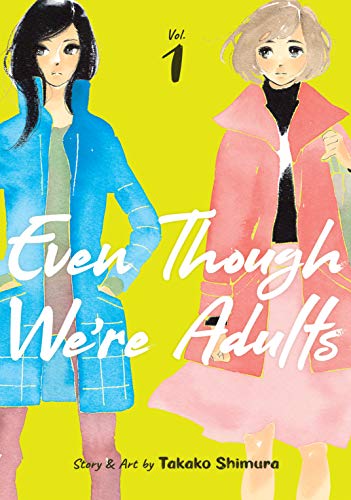 A debut yuri manga from Seven Seas, Even Though We’re Adults (Otona ni Natte mo). From the creator of Aoi Hana and Wandering Son, this josei title runs in Kodansha’s Kiss magazine. A woman meets an old friend, they go out and more… then she finds the friend has a husband. Didn’t this sort of drama stop in high school? This one I’m definitely excited for.

ASH: I’ve really been looking forward to this one.

MELINDA: I’d read anything from this creator, so count me in!

Square Enix has a 2nd volume of The Apothecary Diaries manga.

ASH: I still need to read the first volume, but i’m fairly confident this is a series I will greatly enjoy.

MELINDA: I have a soft spot for Square Enix basically always, and I need to get around to this, too.

SEAN: SuBLime has a new title, MADK. It runs in Printemps Shuppan’s BL magazine Canna, and MADK stands for Motsu Akuma to Danshi Koukousei. Seems to be rather bloody and violent, and has demons.

MELINDA: I like everything in this description, so yes!

SEAN: There’s a 10th volume of Finder’s Deluxe Edition, subtitled Honeymoon, and Given 5 from SuBLime as well.

ASH: I’m a volume or so behind on Given; this would be a good opportunity for me to catch up.

SEAN: Viz has Frozen 2: the Manga, a tie-in I would normally ignore except it’s by Arina Tanemura. Don’t expect an Idol Dreams crossover.

ANNA: I’m normally all about any Arina Tanemura manga but not sure I’m super stoked for a Frozen adaptation.

MELINDA: Always here for new readers getting into Fullmetal Alchemist (or long-time fans expanding their collections), so I’ll always cheer for that!

SEAN: And Yen has some stragglers from January that got bumped. Including a debut, the manga version of The World’s Finest Assassin Gets Reincarnated in Another World as an Aristocrat. The LN of this came out at the end of December. The manga runs in Kadokawa’s Young Ace Up.

And finally, after what I swear were 6 or 7 delays, the 4th manga volume of I’ve Been Killing Slimes for 300 Years and Maxed Out My Level.

Since we’ve no place to go, what manga are you reading?